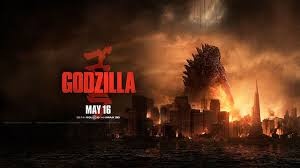 You have to feel sorry for Godzilla, the three-hundred foot scaly beast with a lethal tail and breath that you wouldn’t believe. The poster monster for the dangers of nuclear radiation – exposure to it makes him bigger – he only comes out of retirement when there’s a creature more dangerous than he is. What does he do at the bottom of the ocean, all alone? I like to think he has an allotment down there, a couple of hundred sea anemone maybe. Perhaps he’s hanging with Spongebob Squarepants, or would do if they can get the copyright sorted.

The new big-screen GODZILLA is the reluctant hero of the latest Warner Bros blockbuster. Warner Bros makes films about outsiders – one of their movies was literally called THE OUTSIDERS, which starred Ralph Macchio, Matt Dillon and a then unknown Tom Cruise. The heroes of Warner Bros films are loner types, best embodied by Clint Eastwood in the DIRTY HARRY series that fill the gap when conventional justice fails. The successor to this character is obviously Batman, the subject of another (successful) Warner Bros franchise. In the film written by Max Borenstein (from a story by David Callaham) and directed the young British special effects whiz Gareth Edwards, Godzilla has to deal with two parasitic creatures who are trying to find each other. They are rowdy teens - the action begins in 1999 and skips forward to 2014 - who play with a nuclear weapon, treating it like a roll-up joint. On some twisted level, GODZILLA (2014) plays like an episode of WAIT TILL YOUR FATHER GETS HOME.

The last screen outing of the monster was in 1998, a film produced by Columbia (now Sony) Pictures in which the awakened monster threatened civilization. Columbia (Sony) Pictures specialises in the stoner comedies of Seth Rogen – PINEAPPLE EXPRESS and THIS IS THE END. Godzilla is the sort of creature who would sort Rogen out; he would stamp on THE GREEN HORNET - and probably will do in opening weekend box-office terms. What one Hollywood corporation sees as problematic – even Sony Pictures’ MEN IN BLACK could not successfully integrate Godzilla into society - another embraces. This Godzilla is benign; he might seem terrifying and can’t help knocking stuff over – his tail is not built for 5th Avenue, though it resembles a thousand Louis Vuitton handbags stitched together – but he roots for the kind of guy (Aaron Taylor-Johnson) who has children in wedlock.

GODZILLA 2014 begins in JURASSIC PARK territory, or THE LOST WORLD, time-wise at the turn of the Millennium, as scientists (Watanabe Ken, Sally Hawkins) discovered fossilised remains underneath the site of an oil well. A large creature has left its resting place and headed towards a nuclear plant in Japan where the Brodys, Joe and Sandra (Bryan Cranston, Juliette Binoche) work. He helps run a power plant while his wife works in nuclear safety. If ever there is a film that says husbands and wives shouldn’t work together, it was probably SHANGHAI SURPRISE, starring Sean Penn and Madonna; low point for both. Then there’s MORTAL THOUGHTS in which Bruce Willis is murdered by spouse Demi Moore (though I understand the divorced couple are still good friends) and LOVE AFFAIR with Warren Beatty and Annette Bening (big box-office dud). GODZILLA is somewhere on that list, not that it features a real life couple, more than when Joe orders wife Sandra to check out those energy spikes evident five levels down, and it doesn’t work out, it confirms that one or the other should have watched more horror movies.

Joe Brody’s son grows up to be Aaron Taylor-Johnson, the man who twice donned a green ninja- onesie in KICK ASS and its sequel, KICK-ASSET. What’s a kid, first name Ford, gonna do? Become an archaeologist? No, he is going to join the military and become a bomb disposal expert because they are going to need that skill later on in the story. He is going to marry a doctor (Elizabeth Olson) and have a child of his own but then he’s going to have to fly out to Japan because – well, I don’t want to say too much, but you would have thought the Japanese authorities could serve a deportation order.

Ford Brody makes a major discovery – not the dangers of having two last names – but that there may be a cover up. He runs into the two scientists (Watanabe, Hawkins) who appear not to have aged a bit.

At this point – and Godzilla still hasn’t turned up because the film isn’t told from his point of view – the US Navy becomes involved. There is a lengthy exposition scene in which Admiral William Stenz (David Strathairn) has his back to the camera and you wait for the reveal and it’s just David Strathairn; with that name I was expecting a Ghostbuster, but this is a Warner Bros. Film not a Sony Pictures one. However, the nasty parasites do turn up. There was a noise – call and response. Scientists thought there might be one creature; there are in fact two and you wonder what mobile phone tariff they’re on?

Watanabe’s scientist has an untested belief that men should not drop a bomb on the two destructive, civilization-threatening scientists; they should let Godzilla, the Alpha Predator, sort it. I don’t know where he gets his ideas from – the original Godzilla film maybe? He shouldn’t be wearing a white coat; he should be taken away by them.

The human interest gradually drains out of GODZILLA 2014. Dialogue becomes functional, when it isn’t sparse. There is a running joke - at least I think it was meant to be one – that bystanders ignore the TV images attacking this or that conurbation. At times, I felt that Edwards was still making MONSTERS, where the inhabitants are used to living around such creatures.

There is a mini-drama in which a young boy gets trapped on an airport monorail in Honolulu International Airport, but my favourite sequence involves a school bus driver who attempts to cross the Golden Gate Bridge after it is closed by the military – he’s flooring that sucker.

The real star of the film isn’t the special effects but the sound design, rippling, rasping and finally roaring, it has you more on the edge of your seat than any of the visuals. There is always a probably watching one large monster attacks others in a built up area; you’re worrying about collateral damage. I expect Godzilla isn’t concerned: ‘I don’t have to watch my collateral,’ he might say. ‘Cholesterol, honey, cholesterol’, his mother will chide.

GODZILLA 2014 doesn’t have big crowd pleasing moments and focuses on its least interesting characters. I’m not convinced bland Mr Taylor-Johnson can cut it as a leading man, but here he isn’t given enough material. It doesn’t even have a satisfying ROCKY-style final battle, though Godzilla does lose on points in a couple of rounds; it will lose even more come the release of the new X-MEN movie next week. I cannot honestly recommend it; it is a folly to think that we would enjoy watching Godzilla the anti-hero, even though it has one money-shot, when Godzilla-breath comes into its own. Forget nuclear weapons, a couple of lozenges could have incapacitated him.