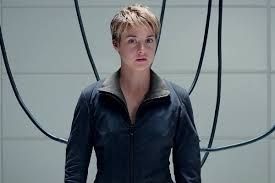 Veronica Roth, the author of the Divergent series, imagines a future society that’s just like high school. There are five distinct ‘societies’ where like mixes with like. ‘Erudite’ is the nerds corner. ‘Amity’ is full of new-age hippies, who grow their own – and probably smoke them too. ‘Candour’ are like the school gossips, totally unburdening themselves. ‘Dauntless’ are the jocks, muscular, brave – more bovine than chicken. ‘Abnegation’ are the rule breakers; they are gonna get busted.

The last time I saw these five ‘types’ was in The Breakfast Club, but they form the alliance in a future world threatened by two types of people. First there are the factionless who got expelled (poor grades, probably). Then there are the ‘Divergents’ who are a bit of all five. Beatrice ‘Tris’ Prior is one of them. At the end of the movie adaptation of Divergent (2014), Tris’ parents are dead, she has killed a boy (Will, played by Ben Lloyd Hughes) beloved of a friend of hers, and she is on the run, blamed for an attack on Abnegation, which, let’s face it, had it coming. (Abnegation means give up stuff; well, they gave up on each other.)

Insurgent, adapted from Roth’s follow-up novel of the same name, finds Tris, her brother Caleb (Ansel Elgort), her boyfriend Four (Theo James) and the annoying other one, Peter (Miles Teller) hiding out in Amity. This place will remind you of the community in The Maze Runner – come to think of it, the ending of this movie reminds me of The Maze Runner. So we are not in the realm of originality or true invention – just because you’ve read the dictionary, doesn’t mean you can spell. Janine (Kate Winslet) has recovered a box from Tris’ parents’ house that she thinks will give her great power. It’s locked, so it must be important. Only she needs a divergent to open it. Janine won’t change out of her blue dress until she has located one such divergent, even though it is obvious to everyone else that only Tris can open the box.

Early on, Tris cuts her hair for no other reason than Shailene Woodley played a girl with a terminal disease in her last movie (The Fault in Our Stars) and it has got to grow back some time. ‘It looks nice,’ says Four unconvincingly. Hasn’t he seen Joan of Arc? Peter picks a fight at the table and Tris and the others must leave. ‘I don’t think I’ve got time for a girlfriend right now,’ says Peter – wait a minute, that was in Teller’s last movie (Whiplash).

When Janine’s hench-people turn up in armoured vehicles and knock down all the fences – they let the chickens out, damn it – Tris and her friends hide upstairs in the house of Johanna (Octavia Spencer). The hench people carry out random tests – non-star, kill ‘em – as they search for a divergent. Then after Peter rats them out, and Tris, Caleb and Four know how Terence Fletcher felt (see Whiplash), they make a run for it. They board an express train and encounter some factionless, who are as threatening as PG-13 (12A in the UK) will allow.

Four discovers that his mother, Evelyn (Naomi Watts with dyed hair) is alive. ‘You died when I was six,’ he says disbelievingly. ‘There was a funeral. I had cake.’ (Well, maybe he doesn’t say that last bit.)  Evelyn explains that she was with Marcus (Ray Stevenson) but then some factionless helped fake her own death. In return for what? That’s what I thought Four, aka Tobias, should have asked.

Evelyn wants Four to help form an army to kill Janine. ‘Do you think the Council will let you?’ Well, they haven’t even collected the bins, judging by the look of this place, so clearly a bit of the old ultra-violence (as much as PG-13 will allow) is permissible.

‘I used to like watching him sleep,’ Evelyn tells Tris whilst Tris is in bed with her son. (Yeah, well, now it’s just creepy!) Four thinks he can do well without his mother – he’s managed since the age of six. Where was she when he needed milk money? (I remember that Melanie Griffith film – and she is embarrassed by her daughter in Fifty Shades of Grey? Check out your own filmography, Ms G.)

Four, Tris and Caleb head for Candour, but then Caleb decides he doesn’t want to go. ‘I don’t want to go to Candour,’ he explains, misquoting the Elvis Costello song. ‘They spin the bottle and it always ends up on me.’ At least, that’s what he should have said.

Once there, Tris and Four are arrested. ‘Where are the rest of you?’ ‘Four is just my name.’ That dialogue exchange ought to be in the film, but isn’t. There they face the Candour Man (say it five times, I dare you) aka Jack Kang (Daniel Dae Kim). The people of Candour are obliged to hand Tris and Four over to Janine. ‘But we won’t get a fair trial,’ says Four. Besides Janine never changes her dress! (If this was a Hunger Games movie, check out the wardrobe.) ‘Very well,’ says Jack Kang. ‘We shall inject you with our truth serum. But a word of warning: it can cause the young lady to overact.’

Four is thanked for his candour – he wasn’t responsible for the attack of Abnegation, but he did jay walk. Tris is not so lucky. ‘I killed Will,’ she confesses. She is not thanked for her candour. Someone close to Will says, ‘just go.’ Well, this is a PG-13 rated movie.

For reasons best known to Tris, she ends up on the top of a building back with the factionless talking to another boy. But then warriors sent by Janine abseil down. The boy ends up shot. ‘Everyone close to me ends up hurt,’ complains Tris. Well, stop standing on their feet. The factionless boys and girls are all shot with a pellet that has some form of mind control device. Suddenly they start committing suicide. ‘Unless you hand over Tris Prior, more will die.’ We didn’t have this when Voldemort threatened Hogwarts.

The stage is set for a confrontation between Tris and Janine. Who should be on Janine’s side but Peter. ‘We stars of Oscar-nominated films ought to stick together,’ is something I wish Peter had said.

What is in the box and will it raise more questions than answers? I imagine many of the teenagers seeing the film will already know. Insurgent has pacy if functional direction by Robert Schwentke, working from a script with little humour by Brian Duffield, Akiva Goldsman and Mark Bomback. I saw it in a 3D version – or threepenny version as I like to call it (3d) and it was the least enhanced of any movie with that gimmick that I’ve seen. It wasn’t so much an immersion experience as a distracting one; every time the camera panned, the screen was streaked with orange. The performances are perfunctory. Only Woodley gives it some feeling, whilst Winslet refuses to say anything about the unimaginative wardrobe (was it because there’s a war on?) I never understand in these movies why the physically attractive leading man (in this case Theo James) doesn’t trade up. Tris is supposed to be dangerous and exciting, but all I saw was a few tattoos. (There is PG-13 rated semi naked kissing, discrete, filmed from behind, not like Titanic.) The CGI is well done and at one point it gets a bit Wizard of Oz-like (a burning flying house, no less). It is moderately entertaining but doesn’t add anything to the set-up of the original. The near identical ending to The Maze Runner left me underwhelmed, but at least one star won’t be there for the third movie, Allegiant. There I was thinking the three-quel would be called Detergent.