Film Review: INTO THE STORM: The wind that shakes the hokum 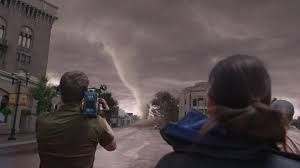 INTO THE STORM chronicles the effect of a freak cluster of tornados on Silverton, a small town in the American Mid West.  As escapist entertainment, it is a gift to review writers (‘the dull before the corn,’ ‘I wasn’t blown away’, ‘difficult to weather such paper thin characters’, ‘minus five on the thrill-o-meter’, ‘crocked bluster rather than blockbuster’). The twist is that many of the characters want to get up close and personal with the tornados. They have Weather Channel or YouTube viewers to think of.

The special effects emphasise the destructive power of these twisters. They strip houses of their woodwork, lift up cars, planes, but not livestock. You can’t negotiate with them. You can’t predict when they’ll strike. You only see them coming at the last minute – well, in this movie, it seems.

The ‘money shots’ pretty much all appear in the trailer. The suspense therefore is: who lives and gets to edit the footage.

Granite-jawed Richard Armitage plays Gary, a High School teacher single dad who fails to connect with his two teenage sons. Seventeen year old Donnie (Max Deacon) is ‘never good enough’. Younger brother Trey (Nathan Kress from iCarly) is perennially cheeky. ‘I don’t want to rush you but who’s your favourite son?’ he asks Dad after Donnie cycles off in a huff, days behind on a time capsule project (‘where will you be in 25 years time?’) Kids, eh, always starting their projects at the last minute. Was I the only one who noticed it was graduation day and nobody was going to mark this stuff?

Donnie isn’t the only one who is behind. Classmate Kaitlyn Reynolds (Alycia Debnam Carey in a push-up bra that is frankly obscene) is in a major sweat. Her video project about pollution in Ghana is badly formatted. How is she going to get the credits she needs to submit with her application? Such false suspense is typical of the film. Nobody needs to be in danger. What are they doing listening to a ‘go purposefully out into the world, armed with social media awareness’ speech from the Principal (Scott Lawrence).

As Donnie goes off with Kaitlyn to the old paper mill to record some new footage (she did say Ghana, right?) a group of storm chasers descends on the town. Pete (Matt Walsh) makes documentaries about extreme weather events, driving from town to town in the Titus, an armoured tank fitted with 24 cameras (I wasn’t counting) and a turret that apparently turns 360 degrees, only it actually can only twist half that. He’s a James Cameron-type, pushing his colleagues to the edge in the relentless pursuit of - well, I’m not sure exactly what. He is poorly advised by weather ‘expert’ Allison (Sarah Wayne Callies), who spends most of the movie reporting what she sees on TV; it is hard to see what her skill set is. She is, however, the only woman in the crew. There are a couple of expendable crew members, contrasted with two YouTubers, daredevil Donk (Kyle Davis), a ‘sensation’ with 301 hits, and his best buddy Reevis (John Reep). They look like they watched too many episodes of JACKASS – or at least the screenwriter John Swetnam has.

The director Steven Quale (FINAL DESTINATION 5) is pinned into a corner by the genre. You cannot have characters continually running from twisters – it does not make dramatic sense. It would be more logical – as does happen here – if they had to race ahead of the tornado to rescue others. Even then, after two minutes of blowing, there is subsidence.

So, little suspense, some storm effects seen by most of the audience in the trailer and a cast not in any significant danger – why see the movie? Of course, we want Gary to ‘reconcile’ with his oldest boy. We want Donnie and Kaitlyn to be rescued. We want the Class of 2014 that we meet – all, er, one of them - to survive. It’s all a bit ‘so what’.

Clutching at straws, you consider what the storm might mean metaphorically. All of the characters are obsessed with digital fame. The storm is the surplus of digital information coming back to bite them. You cannot weather the ‘likes’, ‘comments’ and so on. How can you possibly stand out?

At the end of the movie, an old man tells us that folks are fundamentally decent and ‘we can rebuild’. This is the biggest load of kitsch. People’s belief systems drive them into either good or evil actions; there is no fundamental decency. In my seven day forecast, INTO THE STORM will have a turbulent time at the UK box office against the heavily touted LUCY and will leave multiplexes in 10 to 14 days.