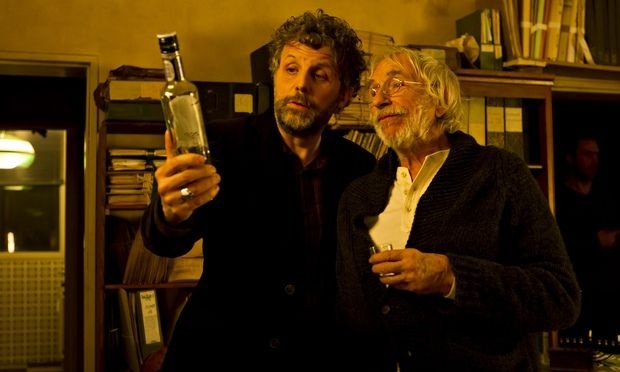 There are elements of Ghost Town and Three Wishes in Vincent Lannoo’s Paris-set romantic comedy, Paper Souls (Les Âmes de Papier). Paul (Stéphane Guillon) is a grieving (read: perpetually grumpy) author whose new line of work, writing funeral orations, can get him into trouble, especially when his clients insist that he is brutally honest. He is punched in the face by an angry relative in the opening minutes. (He describes this as a ‘work-related injury’.) The latest claim for his services comes from a single mother, Emma (Julie Gayet, better known for her relations with French President François Hollande and unlikely to do publicity for her movies in the immediate future). She asks for something different: to write a letter from her late husband, Nathan (Jonathan Zaccai) to her young son, Adam (Jules Rotenberg), who is missing him deeply and becoming seriously troubled and uncommunicative. Nathan takes the gig reluctantly, but for his elderly neighbour, Victor (Pierre Richard, who has had a distinguished career in French comedy) it is a chance for Paul to get back in the game. ‘You write her piece, you sleep with her.’ Victor has his own problems – he never got over the death of his brother. In fact, the whole apartment block is filled with people who have not adjusted to their beloved’s entry into the afterlife – an old woman had her dog stuffed in the begging position, and positions it close to her in whatever she is doing.

The letter itself is a MacGuffin. Adam is less interested in reading it than inviting Paul to his eighth birthday party. Paul gives him a gift – a monkey on a motorcycle – that was Victor’s brother, Pavel’s favourite toy. ‘Tell him it is magic,’ says Victor. Paul passes on this unlikely description, adding that the toy will grant Adam three wishes. ‘What do you want?’ he asks. ‘Snow,’ replies the boy. Sure enough, a day or two later, a single snowflake falls. Then after Paul and Emma have indeed slept together, Adam’s second wish comes true, turning Paul’s life upside down.

François Uzan’s script doesn’t have many big laughs – most of them involve Paul being slapped. Paper Souls is another French film (after Robin Campillo’s Les Revenants, subsequently turned into a TV series) that explores the possibility of the dead returning in their best state, just before the moment of impact. Uzan and Lannoo do something with this idea which is less fun than a dead person running around trying to get their life back together, that is quite clever and also (for the person involved) quite tortuous. Emma’s response to the impossible dream is understandable.

This trend in French cinema actually goes back to the 1984 film, The Return of Martin Guerre, in which the title character (played by Gérard Depardieu) returned after a long absence into his wife’s life; though there is a question whether he ‘is’ Martin. (The film was remade as Sommersby with Richard Gere as the returning soldier.) Underlying the three movies is a desire to justify fidelity after (assumed) death. It is a Catholic notion, though I suspect reflected in other religions, that the widow or widower should live in a state of purgatory because it is God’s will.

The movie’s second idea is that it takes a stranger to tell us something about what we have lost – and what we have. The second half of the movie is Paul’s wake-up call: you have permission to move forward.

If the film isn’t that funny, it is because the serious themes overbear the filmmakers’ instinct to generate an easy laugh. All the characters are sad and some aren’t in the best of health; imminent death casts a shadow on the film. Casting the biggest shadow of all is the Warsaw Ghetto, the subject of Victor’s research. (There is a running gag that Victor cannot find his phone because he has so many papers.)

Richard and Guillon make a good double act; the latter displays a flair for physical comedy in scenes where he has to sneak around. There is a resolution to Victor’s story that is quietly moving. If you stay for the final credits, there is an audio joke right at the end that will you leave you smiling.