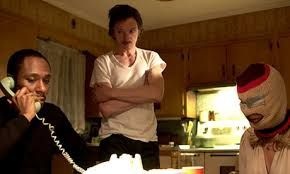 In LIFE OF CRIME, John Hawkes (MARTHA MARCY MAY MARLENE) and Mos Def (BE KIND REWIND) play petty criminals Louis Gara and Ordell Robbie, roles essayed by Robert de Niro and Samuel L Jackson in JACKIE BROWN. It isn’t exactly a fair swap but Daniel Schechter, the director of LIFE OF CRIME, is no Tarantino. Both films are based on novels by Elmore Leonard, ‘The Switch’ and ‘Rum Punch’ respectively. Both films have women trying to extricate themselves from difficult situations involving said criminals. Except that Jennifer Aniston, who plays Mickey Dawson, the wife of a businessman, Frank (Tim Robbins) targeted as kidnap fodder by Louis and Ordell, is no Pam Grier. She’s playing a rich, vaguely bored housewife not a woman dealt a low hand with few options. Pam Grier’s Jackie had to be resourceful. Aniston’s Mickey only has to hope that the White Supremacist (Mark Boone Junior) that Louis and Ordell are hanging with doesn’t decide she wants to leave another Aryan behind in her womb.

Leonard’s crime novels deal with characters who are simultaneously mean and ineffectual. Frank, who travels down to Florida leaving Mickey home alone for the kidnappers (having said bye-bye to their son), is having an affair with a younger woman, Melanie (Isla Fisher). She doesn’t exactly love him but she has a better idea how to deal with the kidnappers than he does, playing hard to get. For the Other Woman, there is nothing at stake. For Frank, he isn’t that bothered. Mickey could easily have an affair with Marshall (Will Forte), the creepy guy from the spa, who knows when to take advantage, but she is (as they say) ‘better than the Gap.’

There is a comic tone to Leonard’s stories that doesn’t come across well on film. His narratives aren’t exactly intricately plotted, so there isn’t the element of surprise. Leonard’s characters are naïve, stupid even, with unrealistic expectations, caught out by events spiralling out of control, double crossing each other. The tension is that one or more of them might get killed, but if you don’t like any of them, you don’t exactly care.

You expect one of the characters to undergo some form of transformation, or at least an experience an emotion that makes us root of them. There is the suggestion that Mickey might fall for Louis, but this is improbable, since she is only just coming to terms with being cheated on. Nevertheless, she experiences something akin to Stockholm Syndrome. You expect Louis to turn nasty, for having his expectations raised but he turns out to be a nice guy. He might be a desperate criminal, but he is not a Desperate Criminal.

You expect there to be a bond between Louis and Ordell so that when the latter betrays him, working with Melanie, Louis would feel hurt and turn on his friend. These characters live in a world where it’s ‘better the criminal you know.’

Hawkes is an unlikely leading man. You imagine him as characters who are fearlessly, violently persuasive, as in his signature role as cult leader Patrick in MARTHA MARCY MAY MARLENE, but his character here isn’t that. Louis is gullible, perhaps having drifted into crime because he fell in with the wrong crowd and never got out of it. The Louis in JACKIE BROWN was a bear of a man, a bit stupid, the kind of guy who is used as an enforcer who might one day start to have dreams. Ordell is the brains of the operation (in relative terms), but as played by Mos Def, he is similarly under-developed.

The only tension is, will Mickey escape from the kidnappers? Aniston is an odd choice for the role. For starters, she doesn’t look or act 1970s (when the film is set). A comedy actress by trade, when she yells, those are comedy screams – we don’t take them seriously. Aniston does not play desperation well. I kept thinking she was still in THE BOUNTY HUNTER, a comedy (mostly unfunny) that she made with Gerard Butler a few years back. She is what I call a caper actress, light, no depth, smart mouth, too beautiful to be permitted to be shown in an unglamorous light by the filmmakers. She does not belong in noir territory.

Aniston anchors the film in light comedy, but there are no laughs. There is a pleasant moment when a character gets their comeuppance, but nothing to get excited about. You want Mickey to avenge herself against Frank who was prepared to let her die. That doesn’t happen. We get an ending that is like a bad situation comedy.

Reviewed  on Tuesday 22 July at a Soho Screening Room in D’Arblay Street, London, 18:30