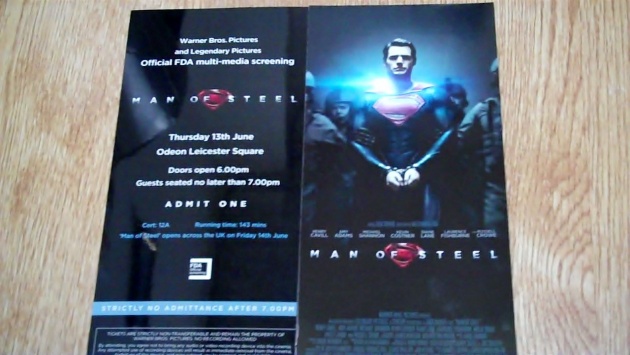 After five films and two TV series, how do you re-invent Superman for the big screen? Producer Christopher Nolan, writer David S. Goyer and director Zack Snyder have a go in the blockbuster MAN OF STEEL, with I’m afraid to say, mixed results.

Let’s start with the good stuff: story structure. We all know how the comic book legend of Superman begins. An infant is packed off in a spaceship as his home planet of Krypton crumbles around him. On Earth he acquires Superpowers. He is a man of steel, though strangely as an adult he can shave. (Christopher Reeve never entertained that possibility.) In the new film, there is more action at the beginning. Superman’s father, Jor-El (Russell Crowe) may be a man of science, but he knows how to give the treasonous General Zod (Michael Shannon) a good lick. In the new version Zod and his buddies aren’t cast out into the Phantom Zone until after Kal (aka young Supey) is launched into space. As Krypton’s core explodes, so Supey’s mother (Ayelet Zurer) gets engulfed in flames. (You wonder if she was thinking: ‘And I was just going to get the kitchen done.’)

Then comes the film’s boldest storytelling touch, to skip all that ‘Jor-El landing on Earth and being discovered by the Kents’ stuff, but instead shows him as an adult. The actor Henry Cavill looks more like Hugh Jackman as Wolverine in these scenes, albeit Wolverine with a pre-disposition to save lives with feats of incredible strength and stamina.

There are, of course, flashbacks. Kal ends up in water and we think for a moment that the movie will go into Bourne Identity territory. He recalls his life on the farm and some very uncomfortable schooldays when he has to learn to block stuff out – in class young Kal has x-ray vision and then some. He has to concentrate on the voice of his adopted mother (Diane Lane). ‘The world is too big,’ he complains. ‘Think small,’ says new mom.

You wish the film had more small moments. We first see intrepid reporter Lois Lane turning up in Canada where scientists have uncovered a spaceship encased in 20,000 year old ice. Kal is heading that way too, seeking the answer to his identity with only a chip to go on.

There is no Fortress of Solitude in this movie, only something more logical – a data chip that allows Kal to (eventually) understand his origins. It also allows Russell Crowe to have a pretty big cameo, though I won’t spoil it.

The pleasures of the previous Superman films were the rescue scenes. Snyder stages these flatly. He is more interested in Supey, finally endowed in cape and costume, taking on General Zod and his posse and slamming them against buildings. (How did Zod and his gang get out? Won’t spoil that either.)

As a spectacle it is extremely repetitive and the core relationship between Lois and Supey doesn’t work – I think Lois is almost an unplayable character anyway, but Adams does his best – she is like one of the first pioneers with a sassy mouth.

Goyer and Snyder do tackle head on Superman’s specifically Jewish origins (as created by Siegel and Shuster). He is an idealised square-jawed WASP like assimilated Jewish American – in the film he says, ‘I’m from Kansas – that’s about as American as you get’. He is a post-Holocaust icon. The most striking image in MAN OF STEEL is a dream sequence in which Kal converses with Zod and literally sinks into a sea of skulls, much like those you would find in the Paris Catacombs, a memorial to the six million dead.

Where it differs is that Zod is the genocidal one. He wants to make Earth uninhabitable for humans to recreate Krypton. Zod is not just a psychopath; he is a genetically modified one. In his society, children are created according to the roles that they are required to fulfil in life, scientist, politician, construction worker. The film posits Kal as the first naturally conceived child on Krypton in a generation. He can choose his destiny, though there is a bit of ‘emergency services’ worker programmed in there somewhere.

There are fairly destructive fight scenes, first in Smallville and later in the unnamed big city. These are fairly monotonous. Snyder employs the crash zooms familiar from his other movies (300, WATCHMEN) though frankly none of the slow motion.

Tonally it is very dour. If you want to analyse the plot, it would be Kal learns to kill as a necessary act. So, not your average PG rated movie. Moments of humour are brief; these involve the military (Christopher Meloni, Harry Lennix) rather than the iconic characters of Lois, Perry White or Clark himself. So a bombastic film, with pleasures of narrative, surprising you with how elements of the story you think you know is re-configured, but it beats you over the head for 143 minutes. The dialogue is also ropey. At one point, Shannon says ‘I will find him, I will find him, I will find him’ almost as if he was answering Snyder’s call for a monotonous super-angry line reading. (Did Snyder wind him up on set?) You only need to say it once, sir. The overkill is typical of the film.