Film Review: Manakamana – eight and a half minutes of a goat’s backside? Are we there yet? 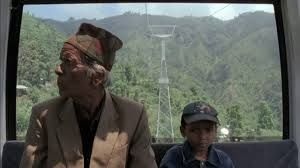 You wait for one film to consist entirely of single takes and two come along at once. After Stations of the Cross comes the Nepal-set Manakamana, in which pilgrims take eight-and-a-half minute cable car rides first to then from a temple to pay homage to the titular goddess. A dress, a chicken, a kitten and some goats are just some of things people bring with them. Why they go isn’t clear; rather we are forced to guess. An old man accompanies a young boy; neither speaks. Then a girl sits in the backseat of a cable car carrying a dress in a red basket. Then a couple take the journey, the man holding on to a chicken, whose red plume pops in and out of shot. The camera stays on these travellers, sitting with their backs to a window, revealed from a point of darkness. In each sequence (and there eleven of them in this two hour movie), we see their outlines and then their faces. Do they know the camera is there? I wasn’t entirely sure. In the sixth journey, we switch cable cars to an open windowed one used for transporting livestock. For eight and a half minutes we stare at the backside of a goat. I know some directors are anal retentive, but this takes it to new levels.

Manakamana boasts two directors, Stephanie Spray and Pacho Velez. Velez handled the camera, Spray the sound. The latter is very important. We hear the movement and the audible jolts as the car passes each pylon – this upsets the goats, I can tell you. On the way up, quiet contemplation (eyes down) gives way – on the third ride – to conversation; you wait 20 minutes for the first subtitle. The conversation is repetitive. Various pilgrims talk about the road, the three day journey made up the path. Going uphill is difficult. Then there are the sol trees, immortalised in song.

We learn something of a legend associated with the region, of a daughter, Kaliki promised to Gosai, a man who comes to claim her. Kaliki (we are told) runs from her fate. A deity intervenes. Gosai is turned into a log. I imagine most women fleeing arranged marriages in this part of the world aren’t so lucky.

There is no voiceover to explain the importance of visiting the Gorkha Kaliki temple. Motivation, such as it is, is revealed through action. Three long haired male members of a rock band (and a kitten) take the trip up, photographing all the way with their cell phones. One of them remarks (twice) that the car doesn’t appear to be attached to the cable. ‘We could fall.’ I could not be the only audience member who became slightly worried. They think about recording a video in the cable car, only they have been beaten to it.

At one point, nature is described as a flower pot in the garden of Nepal. I have no idea what that means either. We hear shouts from hill dwellers as the car passes. What are they saying? Friendly banter or do they resent this modern intervention, the ease at which pilgrims can bypass their community, no stopping for chat or trade?

We learn that one person designed and funded the cable car. Conversation turns on whether the many hills become filled with snow during winter (the answer is no). After our sixth journey up (with the goats), we share five journeys with returning pilgrims.

The most humorous episode involves women eating ice lollies. You’ll be familiar with the sort: chocolate coloured candy-and-nut coating encasing ice cream. An old woman really struggles with it. Ice cream runs onto her hand and threatens to stain her dress. You want to shout at the screen: ‘no, eat it this way.’ You are reminded that cinema is very good at immersing you in the present tense.

The encounter between a white American and an English-speaking pilgrim is also revealing. These two young women sit at the back, the white woman glugging from a two litre bottle of water, which she doesn’t offer to the other woman. It is only half way through the journey, after each woman has stolen a glance at the other – and you sense the American woman has thermos envy – that they talk. The blonde-highlighted American takes out a book and explains that she writes at least 30 words a day, never re-reading her entries. The other woman, who speaks perfect English, but is noticeably much thinner, is interested in her camera. They have a conversation about film stock (the American can only get black and white). She talks about sorting and editing her pictures. The American asks for a drink of the other woman’s water. She doesn’t refuse. However, you get angry. How could she? Would she offer a local her water? It is the only time the film generates a sharp emotional response.

When we are introduced to two musicians who start tuning their instruments, I started to laugh, since I assumed we would have to endure eight minutes of tuning. But then they start playing and for a while we stop noticing the view out of the window behind them.

The final journey back is of an old couple. As they talk, the film literally runs out, though the sound continues. It is the only way this film could have ended, a form of divine intervention like the man being turned into a log. The audience had a hard time sitting through it. There was much activity up and down the stairs of the auditorium and I was conscious of at least four walk outs. At the end of this ‘social ethnography’ exercise, which boasted the support of Harvard University, there was some applause. We knew we had sat through something unique, our own pilgrimage to alternative film.

The National Shrine of Padre Pio: A Pilgrimage

Faith is not the clinging of the shrine but an endless pilgrimage of the heart."--Abraham Joshue Hes…