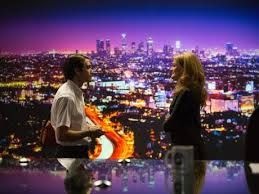 Let’s get this out of the way. Lou Bloom (Jake Gyllenhaal), the titular NIGHTCRAWLER, is not a monster – he is on the autistic spectrum. If RAIN MAN was the defining portrayal of autism in 1989, then NIGHTCRAWLER is its far more informed successor a quarter-century later. Let’s also agree that Lou is a sociopath, the kind of guy who feigns ignorance that he is trespassing by railway lines where he intends to steal metal fencing – manhole covers are also a specialty – and attacks a private security guard when he does not buy his story.

NIGHTCRAWLER, the feature debut of writer-director Dan Gilroy, is a Los Angeles-set jaw-dropper of a suspense drama. I say suspense drama rather than thriller, because though you could classify it as akin to a thriller from the point of view of a serial killer – Lou’s business drive is not to kill people but to work the system; heck, he works the system – you watch it in a constant state of anxiety. Don’t cross police lines, don’t enter a murder scene, don’t rearrange that body! I watched NIGHTCRAWLER with my hand over my mouth. Given that I normally eat mints during movies to keep myself awake, let me inform you that it is a zero mint movie (high praise).

I think it’s fair to say that most people on the autistic spectrum don’t have Gyllenhaal’s physique. Once you train as THE PRINCE OF PERSIA, I guess you never really lose it. This aside, I bought that Lou is the kind of guy who would ask a metal trader for a job after he poorly negotiates a price for the fencing and manhole covers he has stolen. ‘I don’t hire a f-g thief,’ the scrap guy says curtly. Lou’s life changes when he sees a police accident on the freeway. A body is being dragged out and cameramen – freelancers – rush to capture footage. Lou hears one of them on the phone negotiating a price ($300). He is inspired. Armed with his trademark clippers, he steals a mountain bike, sells it for store credit to buy a camcorder and police radio.

Lou is not seen as a professional – he gets in the way – but he does cross that police line and get footage no one else does. He finds a buyer too, the lowest-rated news station whose director (Rene Russo) marvels at his footage.  From then on, he gets organised.

Gilroy’s touch is supremely sure. When Lou interviews a potential assistant, Rick (Riz Ahmed), it is exactly right that he would do so in a restaurant where he has a glass of complimentary water in front of him. Lou makes the most of limited resources and is exploitative too – hiring Rick for $30 a night, reluctantly because he wanted an unpaid intern (but Rick needs the money). When Rick’s faltering directions mean that Lou arrives late to a scene, it is right too that he would complain of the waste of $5 of gas.

Two guys in a car, a video camera, Los Angeles: NIGHTCRAWLER shares these elements with Gyllenhaal’s 2012 hit END OF WATCH. The end veers towards the nihilistic – the job can kill you – though with an important coda.

On another level, NIGHTCRAWLER is a grim satire of the business advice individuals are given to get ahead. America fosters individual enterprise, success at all costs, developing a model that is efficient and effective but above all with no regard for others. So you can view the film as a satire of capitalism. Bit of a turn-off? OK, then it is a film with a vice-like grip.

I did not believe everything in it. What Lou does to his opposition (Bill Paxton), a guy who offers him a job in order to take him out of the game, is a bit much. Lou also makes a proposition to his boss that you feel she should refuse, but accepts (though we never see the evidence).

NIGHTCRAWLER has been compared to TAXI DRIVER, but Travis Bickle is more like Rick in the movie than Lou. Lou clearly has a condition that is not post traumatic stress disorder linked to learning difficulties. I’m sure there is an article in giving a clinical diagnosis to cinema’s top ten sociopaths, but where would you begin with Hannibal Lecter? The ending is more like THE KING OF COMEDY. There is a sense that our interest in horrific news footage increases the problem. Though not all of us want to watch graphic stuff on TV – and if it is anything to do with eyes, I’m out of there. So the moral, kids, is ‘say no to real life gore’; when an advisory caption comes up, switch over. If you are offered a job by some who seems to be autistic, check their references. If you know someone autistic, say ‘hi’, and ensure they have some sort of support network, not to live as a loner.

Reviewed at Clapham Picturehouse, South London, Sunday 26 October 2014, 11:00am screening delayed until 11:30 owing to a defective protector that gave the image first a pink then a green hue; who said digital is perfect?