Film Review: NOAH: Not exactly a wash out, but a little ark-some 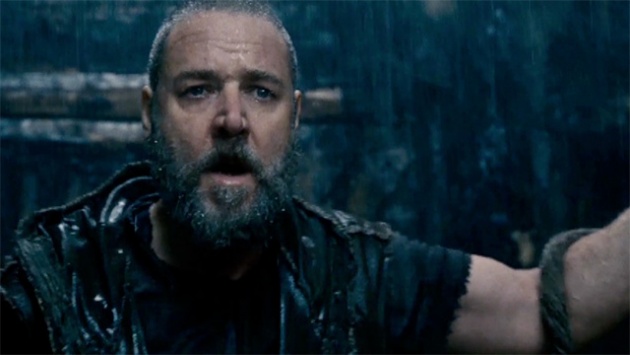 Hoping to hang around in multiplexes for forty days and forty nights is NOAH, director Darren Aronofsky’s re-imagining of the Old Testament story of a man given a vision of a flood and inspired to build a boat to save two of everything in order that the world might begin again. The film addresses such questions as ‘how could Noah build such a big ark on his own?’ and ‘what happens if the animals get hungry?’ as well as such questions you would not expect to ask such as: ‘can Biblical films really be trippy?’ ‘Could mankind consent to wipe itself out?’ ‘If the Devil is in the detail, isn’t the storytelling a little too broad?’ Aronofsky is a serious, big-time talented filmmaker with some ‘B’ movie impulses. His film doesn’t feel like a sermon but it does work as a metaphor for mankind’s response to climate change.

The pitch for the movie doesn’t exactly want to make you take sanctuary in the cinema. Aronofsky’s Noah (played as a boy by Dakota Goyo and as a bonafide tortured action hero by Russell Crowe) is from the line of Seth, whose near relations were wiped out. Somehow he survives puberty and life without a male role model to marry and father three sons. He evades the bloodline of Cain, constantly moving like David Banner in THE INCREDIBLE HULK TV series. When he has a vision of himself underwater, he seeks out his grandfather, Methuselah (Anthony Hopkins) who puts Noah’s youngest son, Ham (Logan Lerman) to sleep (‘Yes, I think HEARTS OF ATLANTIS is one of my very best movies. It’s about-‘ ‘Zzzz!’) before voicing support for his mission to build a vast vessel. Noah also rescues a young girl, Ila, who grows up to be Emma Watson from the HARRY POTTER movies.

I won’t spoil the fantasy element of the movie but I will say that the Aronofsky who made REQUIEM FOR A DREAM is evident here. There are quick cuts of a snake shedding its skin, an apple and a rock being brought to bear on Abel’s head. Not exactly ‘Rock, Paper, Scissors’ but a depiction of original sin. Adam and Eve are depicted in the movie as figures with their genitalia rendered fuzzy – positively glowing.

We sense from Aronofsky and co-writer Ari Handel’s screenplay that cities are the problem – there are too many of them and they are corrupted. We see one such city and it’s a nightmare vision – women screaming, animals thrown in the air. The flood appears to be a response to urbanisation and we cannot help but think of the burning of fossil fuels. As in the Old Testament Bible story, the flood is punishment, the Creator’s only response to rather disappointing handiwork.

The villain of the piece is Tubal (Ray Winstone) a fork-bearded King descended from the line of Cain. He and his army march down to Noah’s construction site and want to take ownership. To describe how Noah avoids being killed, I would have to mention an element omitted from the trailer. Suffice to say, it is not a flock of pigeons, or for that matter, Muppet Tower.

The film verges on the risible until we get Ila’s pregnancy test. I’m not sure why people found it funny but there were isolated peals of laughter at the screening I attended.

Once the deluge takes place, what will Aronofsky do for an encore? Well, it turns out Noah has no interest in saving mankind. He won’t let Ham take a wife and doesn’t rescue a young woman that Ham finds. In Aronofsky’s version of Old Testament times, dating takes place through a brief conversation in a trench: ‘What do you want?’ ‘Nothing! Have some food.’ This is followed by the couple running away and the girl getting her foot caught in a bear trap. Did they have bear traps at that time? Never mind! Ila, supposedly barren, becomes unexpectedly present having been blessed by Methuselah and Noah decides that girl children cannot live. He’s worried about the incest, clearly.

Noah believes he has been chosen so he can complete the task and Crowe plays him like a really dedicated contestant on the TV show THE APPRENTICE; he doesn’t want to be in the final three facing Sir Alan. Watching the film, I totally forgot Aronofsky made THE WRESTLER, but this is another of his movies about characters drawn to self-destruction.

The final scenes do verge on the risible when Noah goes for the berries but it also sets up a sequel (HAM ACTING). NOAH is by no (‘noah’) means a feel good movie but it refreshes the legend and gives the tale a through-line. The music cues us to be moved by compassion, but I wasn’t reduced to floods of tears.

The Bitlanders Film Series to Support Women Empowerment: Beauty and the Beast