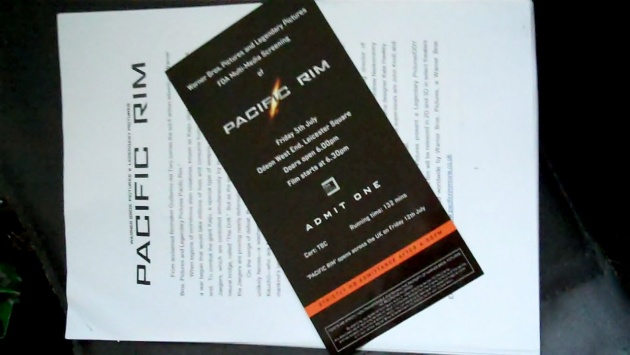 We’ve been waiting a long time for Guillermo Del Toro to get behind the camera again. We all like his Spanish language movies, CRONOS, THE DEVIL’S BACKBONE and PAN’S LABYRINTH. His HELLBOY movies have their fans, too. We wondered what Del Toro might do with THE HOBBIT, but the film was so long in gestation that he moved on. He tried to get a film made with Tom Cruise back when Mr Tom-Kat was out of fashion – AT THE MOUNTAINS OF MADNESS went into turnaround before Cruise bungee-jumped back to box-office with MISSION IMPOSSIBLE: GHOST PROTOCOL.

Now we have PACIFIC RIM, a blend of REAL STEEL, GODZILLA and TRANSFORMERS, in which mankind pools its resources to build supersize robot exo-skeletons in order to battle mammoth creatures that emerge from the Earth’s core. (Funny, I thought Doug McClure had that location figured.)

Del Toro likes to create weird and wonderful fantasy creatures, usually played by Doug Jones, with whom we have some sympathy. Here, the creatures threaten mankind. We have to take them down. No negotiation with ferrous-metalists! (Wait a minute, that’s us.)

‘Go big or go extinct,’ says the poster. Funny, I thought if I went big I would go extinct – I have seen SUPER-SIZE ME. ‘Today, we are cancelling the Apocalypse,’ barks Stacker Pentecost (Idris Elba, in a role sniffed at by Cruise). Funny, I thought THIS IS THE END had been in theatres a month. Anyway, grand statements are made. This is for fans of TRANSFORMERS who don’t like the robo-jocks to have silly voices. It is sort-of kid friendly, but not really.

I have to confess to finding it extremely dull. When old age necessitated a toilet break, I gave in and when I returned to my screen, I hadn’t missed much! (The bots were getting their butts kicked.) The Transformer-like creatures are called Jaegers, the undersea creatures Kaiju. Me, I’ve gone gaga!

Here’s the set-up. Mankind has been slugging it out with Kaiju for years, trashing major cities in the process. It has had some success keeping them at bay (as opposed to at Michael Bay, where the action might have been slicker). But world leaders have decided to build huge sea walls. (‘That’ll put ‘em off.’) So Pentecost decides to get private backing for the Jaeger programme. He puts a team together, including jaded and cynical Raleigh Becket (‘my most admired Elizabethan explorer and my favourite victim of Henry II,’ quoth co-screenwriter Travis Beacham).

Becket is played by Charlie Hunnam, who has done pretty well to make audiences forget his big screen debut in Doug McGrath’s NICHOLAS NICKLEBY – all right, it was the film itself that was pretty forgettable. Hunnam is one of those British actors who went to Hollywood to lower his voice; he attended the Clint Eastwood School of elocution – previous graduates include Jason Statham. It seems to have done him quite well, having made a name for himself in that SONS OF MALARKEY cable television series. (Anarchy? I don’t think so.) I last saw him in DEADFALL – I don’t think others did, though. Anyway, this will return him to obscurity, like Josh Lucas after STEALTH (remember him?) Raleigh’s brother Yancy got eaten by one of the Kaiju and so Raleigh went off to help build a wall. Pretty pointless really, since the Kaiju knocked one down (the engineering consultants were the three little pigs). When Stacker tracks him down, Raleigh signs up.

Only he needs a partner.

You can’t operate a Jaeger on your own – you need a stunt double. No, apparently it takes two brains to master the controls. You wonder why they could not build an automatic. The two pilots have to be in synch. Their minds merge in the drift. Isn’t that in Tokyo? Never mind. The drift is like some vast mental space that is really a joint Instagram account with a few likes and rather more bad memories. Raleigh takes on a few blokes in mortal combat (what is this, WOMEN IN LOVE?) before settling on Mako Mori (Rinko Kikuchi).

Now Michael Bay got into awful trouble using Megan Fox as a teenage boy’s wrist-sprainer (sorry, Megan, you deserve better). Here, Del Toro presents male-female relationships in a chaste fashion; Mako Mori is a girl in a woman’s body stuck in her childhood holding one red shoe. (Which I know was both an R-rated TV series produced by Zalman King and a Tom Hanks movie, but I don’t think Del Toro got the reference.)

This is a film that trades on double acts. Instead of one nutty professor, we have two: Burn Gorman as Gottlieb, walks with a stick, exaggerated British accent, ‘doesn’t like nutty butter’ (to quote Kevin Hart) and Newton Geiszler (Charlie Day), who wants to murder his boss – sorry, who wants to mind meld with a Kaiju brain – that would improve his Facebook profile. Geiszler tends to be hyperactive and more into organic matter.

The Jaeger have silly names like Gipsy Danger, Cherno Alpha, Crimson Typhoon and Hoo Givesadamn for the sole purpose of shifting some kids’ toys. The Kaiju are just called Kaiju; ‘once you name it, you get attached to it,’ someone very wise pointed out.

A desire to understand the Kaiju’s secret plan takes Geiszler in search of Hannibal Chau (Ron Perlman in movie-stealing mode), a collector of Kaiju artefacts – he’s got mugs, key rings, brains knocking about his manor. Chau won’t let go of a Kaiju frontal lobe (clearly he gave it a name) so Geiszler gets desperate.

So why is this boring? Mainly because after you’ve seen one oversized creature tear apart a city, you’ve seen them all. The fight sequences are slow. ‘Charge the arm, activate missiles, press ‘A’,’ the Jaeger drivers say. Why don’t they just shoot them? The Kaiju are waiting for the ozone layer to be depleted before they walk the Earth. I wondered why they didn’t head for China first.

The 3D didn’t seem to be that remarkable. In fact, the reverse, it gave me a headache. The plot takes a familiar course: victory is achieved by noble sacrifice. Some other bawling child (as it were) has a lost shoe.

The internet chatter on the film is mixed, split between the wowed and worn down. I predict a $27 million opening weekend on a par with THE LONE RANGER and AFTER EARTH. Meanwhile THIS IS THE END inches towards $90 million domestic gross (at 7 July 2013). Are you sure you want to cancel that Apocalypse?