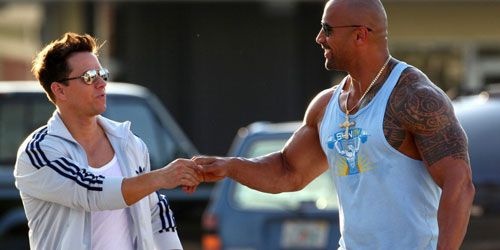 The Miami-set PAIN AND GAIN belongs to the sub-genre of ‘idiot crime movies’, that is, movies in which a hapless group of criminals aim to get rich quick but are undone by their own naivety. The novelty is that this is based on a true story. How do I know this? Well, four fifths of the way through, when events really do go pear-shaped – a cash-strapped character tries to rob a security van - a caption appears, ‘this is still a true story’. The main characters, Daniel Lugo (Mark Wahlberg), Adrian (Noel) Doorbal (Anthony Mackie) and Paul Doyle (Dwayne ‘The Rock’ Johnson), share voiceover duty. Occasionally, they comically counter-point one another. ‘Wow, how does he think this stuff up?’ marvels the recovering alcoholic Doyle of Lugo. ‘I knew he was making stuff up as he goes, but I went with it anyway,’ notes Doorbal of his partner-in-crime.

This is not the sort of fare one usually associates with director Michael Bay, whose last three films have involved Transformers battling one other. Bay’s output also includes ARMAGEDDON, PEARL HARBOUR and two BAD BOYS movies with Will Smith and Martin Lawrence. Bay likes to blow stuff up. A lot! In slow motion! There are few explosions here and when there is fire – well, you’ll see. Bay’s direction is hyper-kinetic. Here, cameras are strapped to actors as they run. Low angles are used. In one scene, a camera swoops around a house to contrast Doyle bench-pressing and Doorbal dancing suggestively with a mammary-enhanced woman as Lugo fights with a would-be business partner who doubts his integrity. There is also a hand-in-front-of-the-eyes moment as a tyre crushes a man’s face. This is not a date movie.

We first meet Lugo in June 1995, doing sit ups at the Sun Gym in Miami where he has a senior position. The cops are coming. He runs and runs and almost slips away until – well, that would be telling. Rewind the clock to late 1994. Lugo is working in a gym but he eyes a competitor with better facilities but older clientele. ‘I can triple your customers,’ he tells him. The thing is, though, Lugo has a criminal record. ‘I can triple your investment,’ he tells a couple in flashback as he swindles them. He ends up in court, where he begs forgiveness, pleading America as the land of second chances. ‘Guilty,’ says the judge. ‘I know I’m guilty, but aren’t you going to give me a second chance?’ asks Lugo with incredulity as he is sentenced.

We are used to seeing criminals as vicious hoodlums, prepared to sacrifice one other. Here, they act with entitlement. They have made their bodies beautiful. Surely they should have the lifestyle to match! Lugo eyes up one of his customers, Victor Kershaw (Tony Shalhoub) – the name has been changed to protect the victim. Kershaw has amassed a three million dollar fortune. He has the great house, multiple businesses and money in the bank. Lugo wants it – wants it all. After all, Kershaw can’t make use of it. He’s middle-aged, a grump. Lugo convinces his best friend, Doorbal, who suffers from erectile dysfunction, to help him. They need a third guy, and that’s when they find Doyle.

It seemed inevitable that the director of THE ROCK should make a film with The Rock. The disappointment is that as Doyle, Dwayne Johnson is an unconvincing goofball. You wonder why a guy who could clearly take both Lugo and Doorbal would fall in with such losers. The answer – and it is an indictment of the criminal rehabilitation system in the state of Florida, or maybe just Dade County – is that Doyle cannot get honest work because of his criminal past. He helps out a local priest, also a recovering addict, but when the priest puts his hands on Doyle’s biceps – you know how stimulus response works.

I wanted to believe in Doyle, but you never quite accept that he would want to share the company of Lugo. Johnson plays Doyle like Lenny in OF MICE AND MEN, but a Lenny with perfect teeth and muscle tone. Somehow, I don’t think so. Johnson gives the most overtly comic performance as he struggles with his faith, but I wish Bay had cast someone where the struggle might have been real. We see from the closing credits that Johnson looks nothing like his real-life counterpart. Why am I not surprised that he does not resemble a half-Samoan WWF wrestler.

The other thing is that the movie is oddly sexless. Lugo also entices a former Eastern European beauty queen into his gang – ‘the honey trap’ – says a trailer-type caption, though I did not quite see it - then after spinning a line that he is in intelligence, passes her over to Doyle. ‘I want to be a patriotic American,’ she says, ‘this is my American dream.’ However, we’re not buying it. The characters are enticed by the idea of a life rather than living in the moment. Throughout they appear to be play-acting in silos.

I believe that Christopher Markus and Stephen McFeely’s script, based on an article by Pete Collins, is funny. You hear the jokes. I don’t think Bay has a talent for comedy, especially black comedy. You know the Coen Brothers can do this stuff – see BURN AFTER READING, another ‘idiot crime movie’, with George Clooney and Brad Pitt, and FARGO – but Bay thinks Doorbal getting his erectile dysfunction treated (by Peter Stormare, a Coen Brothers veteran) is enough.

Mark Wahlberg just about holds the film together. You can believe in his sweaty frustration, his inferiority complex. (His biggest comedy hit is with a talking Teddy Bear, what’s that about?) He is especially funny when Lugo takes over Kershaw’s house and tries to blend in. He tries to teach the local kids how to play basketball aggressively and is terrifying. We are not entirely sure why they hang out with him, taking lessons in masculinity, though Doyle’s girlfriend might provide a reason.

You wait for natural human behaviour. What you get is Kershaw escaping death multiple times and his almost fatal stupidity until he engages private detective Ed DuBois (Ed Harris, a veteran of THE ROCK). Harris beautifully underplays his role of retired cop, retired detective who feels there is enough in Kershaw’s story to investigate. He’s an effective counter-point to the delusional Lugo; you feel that all Lugo needed was a good father figure like him – a dose of good sense.

There aren’t that many laughs in PAIN AND GAIN. Those scenes constructed as humorous, Doyle blithely barbecuing four pairs of human hands out of doors and waving to a neighbour, miss the mark. A defective chainsaw comes into play, but we’re supposed to find the store woman’s ignorance of human hair blocking the blade as funny – we don’t. Bay is slightly better on suspense – the tell-tale drop of blood from the gang’s second set of victims threatens to give the game away. As it is, the big finale when the gang are caught is an anti-climax.

Is it a comedy or a serious drama? Neither. It is like a Coen Brothers movie on steroids, over-blown. It occasionally made me smile but I failed to become too involved in the action. It is a genuine oddity with a likeable cameo from Rebel Wilson as Doorbal’s dream girl. You won’t see muscles as an answer in themselves, that’s for sure.