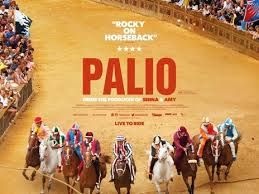 When is a horse race like sex? When it is ninety seconds long, you can end up with a broken leg, and the winner could be rider-less.

I am writing about the Palio, a race between nine horses ridden bareback that takes place in the town square – Il Campo - of the medieval Tuscan town of Siena. The race, for glory rather than money, though plenty of lucre changes hands, is between riders representing each of the town’s nine districts or Contrade. The riders are given fairly elemental names like Goose and Duck – types of fat, really. There is a fairly complex arrangement for such a short race. Horses are allocated to districts. Riders opt for the horse that they want. There are ten horses that take part and are drawn from a proposed group of thirty-two. One of the horses is ridden by the lead-in rider, who starts the race and could – and sometimes does – give one of the riders a competitive edge. There is also the order of the horses placed in a line. Everybody wants to be in the middle. No one wants to be against the wall. Amazingly there are champions of the sport – one rider, Andrea Degortes, aka Vinegar (‘Aceto’) won it fourteen times.

By any stretch of the imagination, this is confusing stuff. You think to yourself, why do they bother? The answer is: for pride, for passion and for kickbacks.

Documentary maker Cosima Spender was given exclusive access to the race, run twice yearly (in July and August) and its participants. The result is Palio, a documentary that starts off in an arresting fashion but doesn’t last the distance.

Filmed in the summer of 2013, it focuses primarily on two riders. Gigi Bruschelli, who is chasing Degortes’ record of 14 wins with thirteen of his own, though in one, the horse finished rider-less. ‘That doesn’t count,’ complains Degortes. It introduces us to Gigi’s 28 year old rival, Giovanni Atzeni, aka Tittia, formerly Gigi’s protégée. He is determined to win the race this year, thwarting Gigi’s ambition.

The odds are against Tittia. For the Palio is not so much marred by corruption as wallows in it. People expect there to be participants who have been paid off to sabotage the race. No one ever owns up to it, but the finger of suspicion is placed at Gigi.

Gigi, a still handsome man who also runs a stable, is tight-lipped on the secret of his success. Spender, who is occasionally heard posing questions, doesn’t ask him whether cheating feels wrong. The film gives us an insight into the Tuscan mentality. Of course cheating goes on, but it shouldn’t be too obvious.

Early in the film, we see members of the crowd set upon one unnamed rider. Some of the audience laughed. But it isn’t funny. Imagine the rider had a different racial profile and you realise how cruel the kicking is. Of course, members of the public would have lost money – or honour – on the race. But it is no good getting steamed up. There are no women riders either. This tradition isn’t just archaic. It is retrograde.

Your sympathies are split between Gigi and Tittia. After all, records are meant to be broken. On the other hand, Tittia doesn’t cheat – he doesn’t have deep pockets. Maybe his district captain threw some money around.In setting up Gigi verses Tittia, the film loses something. Gigi is not a boastful braggard. He wears his accomplishment lightly. On the other hand, there is always room for a youthful underdog. What you miss are the other riders’ points of view. It’s never just a two horse race. Spender also doesn’t interview the captains, who create corruption.

Palio is at its best when it hints at why Tittia left Gigi’s stable. He has a young wife and child; you sense he owed it to himself to strike out on his own. Gigi isn’t an interesting antagonist. He is mostly quiet, pragmatic.

So, in spite of what the poster says, Palio is not ‘Rocky on horseback’ although it does have a gripping, if short finale. It trades in rumour rather than fact. The only thing certain is the race winner. It feels unnecessarily padded for a 90-odd minute movie and drags after a strong start. Still, it shows you a spectacle that you are unlikely to experience. I said to myself, ‘Crumbs, I also felt those hooves’ – though it could have been the person behind me kicking my seat.

Festa del Soccorso: one of the craziest celebrations in the World

Festa del Soccorso One of the craziest celebrations in the World. Image edited by Pixor Hey, bitfel…