Film Review: RUN ALL NIGHT: A particular set of thrills 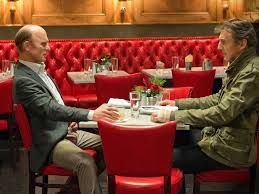 Liam Neeson gives two performances in the pacy New York-set thriller Run All Night. For the first twenty minutes, his character, former hitman Jimmy Conlon, is an embarrassing bum, short of money for a heater for his crummy apartment but not too willing to work for it. Estranged from his son, Mike (Joel Kinnaman), his only friend is pseudo-respectable ‘businessman’ Shawn Maguire (Ed Harris). Even Shawn isn’t keen to see his old friend play Santa Claus, but being only semi-respectable, he can’t send his kids to see Santa at Macy’s. With a young girl on his knee, Jimmy flirts with the girl’s mother. It is quite a leap to imagine this guy haunted by the ghosts of the men he killed, including his nephew.

Whilst Mike tries to make a decent living as a limousine driver and mentoring a fatherless kid at the boxing gym, Jimmy relies on favours to scrape by. John Harding (Vincent D’Onofrio), the detective who could never convict him, wants Jimmy to give up the names of the men he killed, to give their families closure. Jimmy prefers the bottom of a glass. All this changes when Mike picks up two Albanians going to see Shawn’s cokehead son, Danny (Boyd Holbrook). The Albanians paid Danny for an introduction to his father, who controls the docks, but Shawn won’t be a part of a cocaine smuggling operation. The Albanians want their money back, but Danny gives them the Monopoly kind (for copyright reasons it’s not actually Monopoly money – we wouldn’t want to see phony Monopoly money, after all). Danny executes the debt collectors, delivering a fatal bullet in front of Mike. Mike has no interest giving up Danny to the police, but Danny comes after him anyway. Jimmy gets wind of this and goes to warn his son.

At this point, Neeson stops playing a drunken loser and starts being ‘Action Man Neeson’, with practical advice like, ‘don’t use a gun’, ‘don’t call the police’ and ‘don’t make pseudo dramas with Paul Haggis’. The bottom line is that Jimmy shoots Danny before Danny shoots Mike. Shawn, lost in grief, decides to ignore the fact that his son was a dead beat drug addict with no talent for criminality, and decides he wants to kill Mike for revenge. ‘I want you to have the same blank look as I have,’ Shawn tells Jimmy, but there’s no chance of that – Neeson gets the bigger cheque. Irish eyes are indeed smiling.

Written by Brad Ingelsby and directed by Jaume Collet-Serra, Run All Night hits its stride when two cops arrest Mike with no intention of taking him to the station. Jimmy pursues a police car in his own car, which makes a change from the usual. I worked out that with his cavalier attitude to money Jimmy probably hadn’t filled the tank for days, so I expected him to run on empty. But this is a Hollywood movie – so cars don’t run out of petrol, there are always plenty of bullets, and Jimmy doesn’t look like he’s tasted a drop of liquor in days.

Suspension of disbelief is required. However, the action sequences are fast and furious enough to carry you along. Indeed, after Jimmy shoots one of the corrupt policemen and he and Mike become the two most wanted men in the city, the film scarcely stays still. Jimmy demonstrates the not so gentle art of stealing someone else’s subway fare (‘hey, you owe me $2.50’). I know that how that guys feels – after Third Person, Neeson owes me two hours of my life back.

There isn’t much in the movie that you haven’t seen before, except maybe an Oscar winning composer as a hitman. I know what you’re thinking – times are hard for Alexander Desplat. Actually, the role of Mr Price is played by Common, who reduced an audience to tears at this year’s Oscar ceremony performing ‘Glory’. (When is that rapping going to end?) Price has one of those lines you only hear in movies. ‘Conlon? I’ll do him for free.’ Surely, he’d want to negotiate terms.

It is a fact universally acknowledged that Irish mob bosses only employ overweight burger eating knuckleheads to do their dirty work. So it proves here. But the body count steadily mounts when Price is in pursuit. We’re meant to believe he can pass off his work as Conlon’s.

At one point Common looks like Dolph Lundgren in the Universal Soldier movies, with an ultra marine spy light - that ain’t common, that’s messed up. He also says at one point a line you only hear in movies: ‘you should have killed me when you had the chance’. In fact, I’m pretty sure I heard that line in another movie - besides in The Conversation.

Will Mike finally forgive his father for running away and include him in the photo-collage ‘Us before You’ – Mike’s wife (Genesis Rodriguez) is expecting their third child? That’s hardly the point. We know from the opening shot how the drama plays out and where it will end.

Jimmy is desperate that his son doesn’t end up like him. ‘Don’t kill anybody,’ he pleads. Not exactly great advice in a gun battle!

Run All Night doesn’t have a high concept. It does however have Nick Nolte as Jimmy’s grizzled old dad. I’m sure Nolte and Neeson are broadly the same age – though only one of them appeared in Krull. The older Conlon is there to tell Mike a home truth about his dad. Not great advice after a gun battle.

Were it not for the breakneck pace, Run All Night would seem more risible than it plays. It certainly piles on the clichés – and of course there are no great roles for women (as Jimmy’s mother, Lois Smith spends her scene in a coma). Collet-Serra drains the film of pathos and gives us zippy transitions, the camera speeding from one location to another like Google Maps on Red Bull. It makes little use of Madison Square Garden – the ‘old neighbourhood’ is a bar opposite, really – and features that old chestnut, characters chasing one another around stationary railway wagons. (I only ever see railway yards in movies – why is that?) The film is enjoyable. I surrendered to it. It was like going in a taxi cab and forgetting about the fare – at one point Jimmy goes into a taxi cab and doesn’t pay the fare. There are some borderline ridiculous moments – Mike and Jimmy knocking on doors when they are the most wanted men in the Borough. (There is even a line about Google Maps.) I went with it. No one is going to get any Oscars for this, but I smell a mid-size hit for Neeson and company – until Insurgent sends it tumbling down the box office chart.