Film Review: SAY WHEN (aka LAGGIES) – no delayed reaction, I like 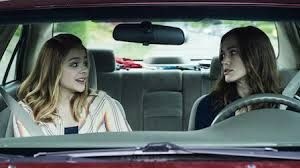 True cineastes should declare their enthusiasms, loud and often. For some people, it might be THE EXORCIST, JEREMY and DOUGAL AND THE BLUE CAT. For others, it might be STAR WARS.

When I saw writer-director Lynn Shelton’s YOUR SISTER’S SISTER in 2012, I was blown away. It embodies everything I love in cinema.

For a start, it has an empathetic central character, Jack, played by Mark Duplass, who we first encounter listening to a eulogy about his late brother, Tom.

Jack, like most of us, bridles in the face of the excessive praise, in this case, Tom’s temporal canonisation. He is quick to detonate it, but that doesn’t mean he’s hurting – he’s hurting real bad.

His female best friend, and late brother’s ex, Iris (Emily Blunt) – ticking time bomb, there – suggests Jack take some time off and stay at her father’s cabin.  Great idea! Only Iris’ half sister, Hannah (Rosemarie DeWitt) is there. She’s recovering from the break up with her girlfriend, Pam.

Two wounded souls under the same roof. Asking for trouble!

What else is great? The performances, character development, setting, lack of predictability and the absence of artificial ingredients. No waste either. Every scene needs to be there, with its point, its purpose, inching the story along.

I go to the cinema to be surprised – I was sideways-surprised. It felt like a modern classic. I felt the same way watching YOUR SISTER’S SISTER as I did when I saw RESERVOIR DOGS or LA HAINE or L’APPARTEMENT. Violence or narrative trickery didn’t provide the wallop this time; merely watching characters extricate themselves from their personal mess.

Shelton’s follow-up, TOUCHY FEELY was a disappointment. If a director could unmake a movie, I wish Shelton could give back the investment and expunge it from the CV of all concerned. I was, as they say, untouched.

SAY WHEN (the British release title for LAGGIES) is a different matter.

Shelton didn’t write it - the honour goes to Andrea Siegel - but it is another film about an inappropriate relationship.

Megan (Keira Knightley) is not conventionally unhappy, but has stayed around in town too long. Every one of her friends is moving towards marriage and children but Megan has deferred commitment. She is an unusual character because those who are commitment phobic in the movies have something going on. If she was a man, she would be following a sports team, drinking with her buddies, anything to remind her that she hasn’t taken any of life’s big decisions.

It is however perfectly possible to imagine a woman cruising in first gear. She has a nothing job, helping out her dad (Jeff Garlin), twirling a sign that points to his office, the sort of occupation you might have when you are fifteen and dipping your toe in the world of work. Megan is essentially undecided and has never had the impetus to force the issue.

Her discovery that dad is cheating on her mom changes all that.

Afterwards, she doesn’t want to twirl any more signs – she can read them. She goes for a drive and ends up helping a troubled teen, Annika (Chloë Grace Moretz), hanging out with her friends, buy alcohol.

This is not particularly responsible on Megan’s part, but they are kids – how much damage to themselves could they do?

The kids, strangely, invite Megan to hang out with them. For Megan, it is like looking back at her younger self. She should be past this, though – she should be way past it.

Megan is surprised to be asked by Annika for a favour. Can she pretend to be her mom? Annika is in trouble at school; she doesn’t want her father to be called. Megan agrees. Can she pull it off?

This is Keira Knightley we are talking about - she doesn’t look like CARRIE’s mom!

Megan gives a rather stilted performance in front of the Principal but provides the necessary parental-style assurances. She has a favour to ask of Annika in return – can she hide in her bedroom?

The reason for this sudden desire to take flight is that her boyfriend (Mark Webber) has proposed. Megan is not in the mind-set to accept, though she puts on the ring. Rather, she pretends to go on some form of self-help course.

We watch the relationship between Megan and Annika develop. Annika desperately wants to see her mom (Gretchen Mol) and Megan facilitates this. The encounter is super-awkward. Annika’s mom fled motherhood. All she has to offer her daughter is lingerie. She is no good with kids, only with sexualised adults, but she isn’t motivated by desire; she can see its limits. Being beautiful makes someone open a door for you, but when you step through it isn’t anything different.

SAY WHEN is about disenchantment. However, I have not mentioned a major character, Annika’s dad. He’s played by Sam Rockwell, and Rockwell, the star of CHOKE, doesn’t do bland, predictable or easy to love.

The film doesn’t have the emotional wallop of YOUR SISTER’S SISTER, but it moves in barely chartered territory without going for easy laughs. I would hesitate to call it a comedy because instead of trying to amuse us, it shows us anguish, notably coming to a head with one of Annika’s friends and a car. The scene is a real ‘let’s be an adult’ wake up call.

The only moment that I hated takes place at an airport. You can see what Siegel and Shelton want to do, but the characters at that airport would have made that discovery even before they packed their bags. Give a revelation a cinematic location? No, actually you don’t need to, but I can see why the choice was made.

The rest of the movie is a treat. You haven’t seen perpetual adolescence treated in this way. SAY WHEN is sort of original. Watching it, you don’t feel manipulated and there’s something joyous about watching Megan/Knightley playing at grown up. I’m undecided about Moretz. She hasn’t turned into a sitcom actress but she’s not a truth transmitter either. She’s a star when beating people up but you can’t figure out what’s behind that attitude, a kid who likes to play dress up?

Pictured: 'I thought you were collecting us in a sedan.' Mel (Marc Maron, centre) expresses sceptici…