Film Review: SON OF A GUN – not terrible, but I recoiled 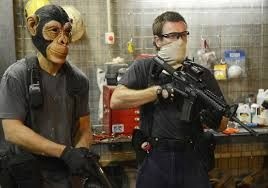 I had to chuckle when I came across a review of Australian director Julius Avary’s Son of a Gun, that described star Ewan McGregor as ‘incomprehensible’. McGregor may make perplexing career choices - I don’t think playing the young Obi-Wan Kenobi did him any favours but it must have seemed a good idea at the time, and as for Jack The Giant Slayer - but even when employing his natural Scottish (Edinburgh?) accent he is not hard to understand. Maybe the speakers weren’t working in that reviewer’s screening room or maybe he was just plain deaf, mate. At any rate, McGregor, whose memorable roles include Rodney Copperbottom, Nick Leeson and a naked turn in The Pillow Book (I did say memorable) is redefining himself as a bad guy in Avary’s film. Or he would if he wasn’t so thoroughly nice.

In this Australian crime thriller (terms used advisedly – New South Wales does not represent all Australia), McGregor plays career criminal Brendan Lynch whom we first meet behind bars. He protects new inmate JR (Brenton Thwaites from Maleficent) from some pretty nasty lifers. We don’t find out why JR is in prison – perhaps he decided he didn’t like Vegimite – but on release, he helps Brendan escape; if nothing else, the film demonstrates that if you go for a city ride in a helicopter, you should expect flight companies to check your criminal record.

One of Brendan’s gang is a convicted child molester. ‘You lied to me,’ says Brendan as he beats him up. I presume the other fella said it was sheep. At any rate, Brendan decides to trade JR’s nice apartment with a beach view (‘single point of entry’ with a leg-breaking drop for an escape) for a hole. JR is not impressed.

Hooking up with crime lord Sam (Jacek Koman), he of the ‘is not personal, only bad East European accent’ type, Brendan agrees to participate in a plan to steal some gold bars. JR only has eyes for Tasha (Alicia Vikander), a waitress in a gentleman’s establishment owned by Sam. JR’s plan is to get his share of the gold and split with her. ‘Keep your bag packed,’ he advises. But no girl has successfully escaped Sam on the grounds, I suspect, that he usually lets them go aged 35.

So far, so cliché-ridden! Does it get any better? Nyet! There is a daring robbery in which Brendan, JR and company pose as smelting staff (I think that’s what they said). Sam’s nephew tags along and shoots one of the hostages. A thoroughly generic car chase ensues. They escape, naturally. But then JR realises they have been set up.

Expect crosses and double crosses – those darned chequered games on your mobile phone look so appealing whilst sitting through this movie – and you won’t be disappointed. The film doesn’t have a unique selling point. It does have one of those ‘ought to be catchy but aren’t’ exchanges. ‘We’re either chimps,’ says Brendan, ‘or bonobos. The chimps fight for everything. The bonobos let themselves die out.’ JR is there to prove that ‘bonobos’ have survival instincts too; in fact Bonobos is the name of the nightclub he’ll open with his share of the gold (I imagine).

Alicia Vikander demonstrates her versatility in her third (UK cinema) release in three weeks (after Testament of Youth and Ex-Machina). She also has a nude swimming scene. JR can’t exactly swim because he was (unsuccessfully) taught by being thrown in the water as a kid; the Australian Swimming Instructors Association would like us to know that more effective nurturing methods are practiced.

I didn’t hate Son of a Gun; I was just underwhelmed by its lack of ambition. I didn’t believe that McGregor was this intense criminal mastermind, mainly because I’m not sure he is in control of his own career. As for Thwaites, he may yet be a star but his performance here is just adequate. Some nice locations, but I didn’t believe a word of it. The dialogue may not be incomprehensible but the reason for making it might be.