Film Review: The Hobbit: The Battle of the Five Armies: few Tolkein points 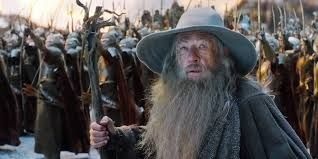 Does anybody remember why Bilbo Baggins (Martin Freeman) the titular Hobbit set off with a band of dwarves and a wizard named Gandalf (Ian McKellen) to the Lonely Mountain? I’m not sure I do. It’s been two years since The Hobbit: An Unexpected Journey annoyed cinemagoers with the high-frame rate and I have quite forgotten why our hero had been coerced to join a bunch of rowdy uninvited housedwarves led by Thorin Oakenshield (Richard Armitage). Bilbo’s a thief, a skill that comes in very handy. But should he not receive some form of rehabilitation? Or is the moral of J R R Tolkein’s The Hobbit that all anti-social misfits have something to contribute?

I have always viewed The Hobbit as an advertisement for outward bound activity. See the dragon, climb a mountain – don’t complain about the cooking. What we fail to detect in Freeman’s performance is any kind of permanent character development. Bilbo becomes brave; he appreciates the purposefulness of Thorin, who initially distrusts him, and he proves his worth. What I lost in Peter Jackson’s film trilogy is the sense that adventure makes Bilbo a better Hobbit. Maybe that was never the point.

In Jackson’s movies, there is both a great evil that is either embodied by Smaug, the dragon star of the second movie (voiced by Sherlock star Benedict Cumberbatch) or by the Orcs, and a lesser evil portrayed by the Mayor of Lake-town (Stephen Fry) who doesn’t do great evil because that would require presence, a long cape and a big stick – you know what they say, you can’t get the staff. The evil is also resident in the gold that sits deep in the Lonely Mountain, treasure that speaks to those who covet it, a true booty call. This is known as dragon sickness and it infects Thorin, turning him into a right grump.

The Battle of the Five Armies, the concluding part of The Hobbit trilogy, begins in episodic serial style with the dragon Smaug about to toast the villagers of Lake-town after having been disturbed by Bilbo and the company of dwarves. He’s trying to prove a point – that he has bad breath, very bad for the fleeing populace who wished they had built the town of fire-resistant substances. But they have on their side the young imprisoned Bard the Bowman (Luke Evans, still in his Dracula Untold attire) who, according to legend, will not thrive in any franchise with a Universal logo. Bard has been prophesised that he will slay Smaug with a single arrow, but the dragon is singularly unaware of this fact since he doesn’t socialise much. The pleasure of the first twenty-odd minutes – and it is one of the best openings of a trilogy since the rescue of Luke Skywalker in Return of the Jedi – is in seeing how the prophesy is played out, and the various uses that Stephen Fry can be put to. We know him as a novelist, raconteur, quiz show host, comedian, film director but not, until now, a counterweight.

With the Smaug story resolved, the majority of the film is concerned with five armies descending on the Lonely Mountain. There are elves, dwarves, humans, who aren’t really an army, and two lots of Orcs. Thorin barricades himself and his dwarves in the Lonely Mountain, as he searches for the Arkenstone, which is the only sort of rock that looks as though it might be able to power something – sort of the Duracell of stones. Bilbo, who has secreted the Stone about his person (no one asks about his trousers) won’t give it to Thorin until he discovers his reasonableness. It’s a long wait.

I should explain that Gandalf has been separated from the company and imprisoned in a cage. I never understood the purpose of prison in fantasy movies. ‘I am not going to kill you but instead allow a suitable time to elapse until two members of the Lord of the Rings cast turn up.’ OK, good strategy.

Meanwhile there is the small matter of the love between Elf and dwarf. Tauriel (Evangeline Lilly) is smitten with Kili (Aidan Turner) but their love is forbidden. How do they know whether it is true romance? Because, as one character, says it hurts. So alas does piles.

As Thorin’s cousin, Billy Connolly turns up for the big ruck looking like one of the Gauls from the Asterix comic books. Never mind New Zealand film crews seeking fair recompense; what will the publisher of Goscinny and Uderzo do? Connolly mainly exercises his tonsils in the role; I could scarce believe he wasn’t computer-generated.

There are other cameos too, from Christopher Lee as Saruman the not yet evil and Sylvester McCoy as the rabbit tamer. There are huge worms and giants used as battering rams, somewhat unforgivably. The battle is epic, which is to say, it goes on for a long time. Is it exciting? Well, it is watchable. Jackson knows how to vary pace and location and build up tension. He balances it with an amusing turn from Ryan Gage as the cowardly Alfrid, who will do anything to avoid picking up a sword.

The third film in The Lord of the Rings trilogy was nominated for an Oscar; it is hard to think that The Battle of the Five Armies will receive similar validation. It does feature the first proper post-Blue Jasmine appearance by Cate Blanchett who appears with aqua-marine lighting – well, whatever works.

So at the end, do the dwarves find satisfaction at the Lonely Mountain? Only if they do something about the name! If you are going to construct an epic, it needs epic themes and struggles. I don’t think The Hobbit has these. It is a modest story, teased out almost to breaking point. It has moments that you enjoy but it isn’t something that gives you deep pleasure. I yearned for a voice that cried:  ‘master Frodo, master Frodo’. Or better yet, ‘my precious.’