Film Review: THE HOBBIT: THE DESOLATION OF SMAUG: Middle Earth, Treat of a Movie 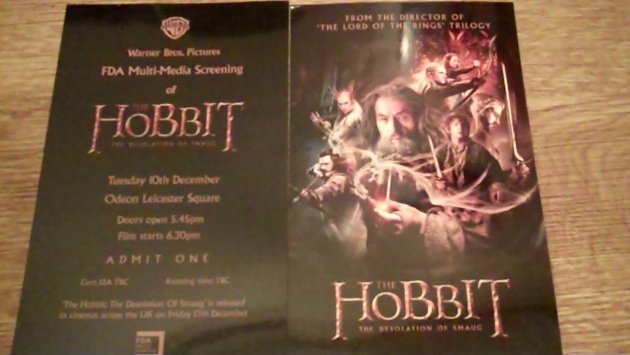 It begins with a ‘blink and you’ll miss him’ cameo from Peter Jackson and proceeds with great aplomb. THE HOBBIT: THE DESOLATION OF SMAUG is a fast-paced, action-packed inventive treat, albeit with a dragon who talks too much and who sleeps under a sea of stolen treasure. How is that even possible? I can’t even keep my duvet on at night.

I’m not sure it’ll win over new fans of J R R Tolkein since it requires you to pick up the story part-way through without the benefit of a ‘previously on Middle Earth’ sequence. However, it certainly makes up for the over-long, took an age to get going disappointment of AN UNEXPECTED JOURNEY, the first chapter of the trilogy.

DESOLATION begins with Thorin Oakenshield (Richard Armitage) leading a company of dwarves and one thieving hobbit, Bilbo Baggins (Martin Freeman) towards the Lonely Mountain in order that they can retake their kingdom. Their crib (kingdom inside the mountain) is taken over by a large fire-breathing dragon, who should fall in love with Donkey by my reckoning (see SHREK). At one point, before they enter a dark forest, their wizard companion, Gandalf (Ian McKellen) tells them to set free their horses. Why make it easy for the dragon, eh?

Typically for a Middle Earth film, dark forces are at work, not in the kind of ‘let’s build a Death Star’ type, more the thundering orcs who serve an evil master. Orcs are the kind of bipedal creatures who cut themselves shaving so much, their hair doesn’t want to grow back. Their skin is literally white with fear: ‘not the Ladyshave, no, no, no!’ There are no female orcs, which you suspect is part of the problem; no one to tell them, ‘don’t forget to brush your teeth’. I have a theory why they get beaten in battle with an ease disproportionate to their fearsomeness. What they have got to live for? There is no Lower Shire pension plan.

Typically, when Gandalf instructs Thorin to take his men through the forest of illusions – ‘don’t wander from the path; you’ll never find it again’ – he does not take the short cut himself. He has a rendezvous with another wizard, one with birds in his hair and played by the Naff Doctor (Sylvester McCoy). Exposition, more walking and then Gandalf goes into another dark place. ‘It is undoubtedly a trap,’ he tells the other wizard and sure enough his big stick is no match for a trippy special effect. I thought for one moment when the camera zooms into a figure surrounded by flame, and we see within another figure surrounded by flame that we were going to get a full on DOCTOR WHO title sequence.

Meanwhile, after acquainting themselves with some large spiders, Thorin and his men are saved by some Elves. They get a lot of hospitality in this film, what with a bear-like Skin Changer allowing them to rest at his house early on. ‘I hate dwarves,’ the Skin Changer moans, ‘but I hate Orcs more.’ For some reason the Elves don’t kill Thorin and his men straightaway but through them into cells. I can’t see the point of this. You throw your enemy in jail even to punish them with solitude – I recommend screening to them the first half of AN UNEXPECTED JOURNEY while they are there. Alternatively, you do so because you want to set an example to the outside world. But the Elves don’t answer to the Outside World. They have an obscure sense of honour. I will feed my enemy until he rots? Seems like a bizarre punishment. Fortunately, Bilbo hides himself using The Ring – the one Ring that will rule them all and make director Peter Jackson use fish-eyed lenses. I’m not sure how he entered the Elvin Kingdom gates but we’ll let that pass. The escape sequence builds to a spectacular barrel-riding sequence which is easily the best – and most fun – piece of action spectacle that Jackson has yet choreographed and well worth the admission. You wonder how he is going to top it but then he gives us a love story – the Elvin Master of the Guard, Tauriel (Evangeline Lilly) falls for a dwarf. Then we have a human widower who simply wants to care for his progeny whilst living in a dark riverside village ruled by Stephen Fry with a dodgy moustache and bad teeth. (If you want to know whether to trust someone in Middle Earth, check their dentures.)

Jackson and his company of writers, Phillppa Boyens, Fran Walsh and Guillermo Del Toro show great skill in storytelling as the Orcs close in on Thorin and his men. An Orc arrow threatens to kill Tauriel’s love interest. Meanwhile Thorin plays politics. There is a prophecy that says he’ll light up the mountain, so the despotic mayor bids him, ‘good luck with that.’

There is a key that will open a door to the Lonely Mountain; the lock will reveal itself when the last light falls. The sun sets. The dwarves scrabble around looking for an opening (but it is panto season). They give up until Bilbo waits for the moon to rise and then – voila – what a cheat.

In the climax, Bilbo is sent into Smaug’s lair to flatter the dragon before the dragon flattens him. There is an extended chase sequence before Bilbo mutters the immortal line, ‘What have we done?’

OK. You get a big hint how the finale – to be seen next year under the title THERE AND BACK AGAIN – will play out. You are told whose destiny it is to kill Smaug, to redeem his family, and prophesies have a habit of coming true. So it is not much of a cliff hanger. I worked out that you could probably wrap the trilogy up in another half an hour; so why no extension of play? I felt like the Australians on the Fourth Day of the Second Test of the Winter 2013 Ashes series. ‘We don’t need that long to knock off the tail.’ In that match, the audience were admitted free for the final day. Here, I think Jackson, Warner Bros and New Line cinema should offer the same.