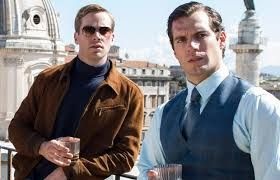 As an impressionable young lad in the 1970s, I watched the Man From U.N.C.L.E. films on TV of a school holiday morning: The Helicopter Spies, The Karate Killers, The Spy With My Face, One of Our Spies Is Missing and many others. What I didn’t know was that they were double episodes of a TV series, produced between 1964 and 1968 in response to the popularity of the James Bond films. The series paired Robert Vaughn as American agent Napoleon Solo with David McCallum as his Russian born counterpart, Illya Kuryakin. I was blissfully ignorant of the Cold War and of the anomaly of an American and Russian working together. Foreign affairs didn’t make front page news in an era of three day weeks and Kevin Keegan in an England shirt. Much latter I understood the tone to be mocking. U.N.C.L.E.’s arch enemy was T.H.R.U.S.H., the sexual connotations of which went over my young head.

What I remember most are the stop-start credit sequences, with freeze frames interrupting the action. My brother and I would enact freeze frame mock fight scenes in homage to the films on the granite humped roofs outside our first floor council flat on the Old Kent Road, South London (Bowness House, if you’re curious). Why outside?  Jumping on the sofa wasn’t allowed.

Four decades later sees the release of the long-in-gestation movie version. Directors like Quentin Tarantino sniffed at the project but Guy Ritchie, fresh of the success of two Sherlock Holmes movies, was the one who, with his writing and producing partner Lionel Wigram, took the bait. For a while Tom Cruise was attached to the project as a laid back Napoleon Solo, who let the younger guy, Kuryakin, do the work. But scheduling problems prevented Cruise from making the film; instead Ritchie cast Man of Steel star Henry Cavil as the agent.

There was an expectation that any film of The Man From U.N.C.L.E would set it in the present day. But the bromance between a Russian and an American wouldn’t make a heap of sense post-Donetsk.  I’m not entirely convinced it made sense in 1963, the year in which Ritchie’s film is set (post Bay of Pigs but pre-assassination of President Kennedy). Cinema of the era exploited detente – the Russian and American nuclear stalemate . The McCarthy witchhunts of the 1950s, in which artists in Hollywood with a past association with the Communist Party were denounced and prevented from working was still fresh in people’s minds. Thus the conceit of The Man From U.N.C.L.E., the title referring to Uncle Sam rather than United Network Command for Law and Enforcement, was a bit of wish fulfilment on the part of series creator Sam Rolfe:  if the Soviets and Americans could get along, maybe the world would be a better place.

The film begins in East Berlin with Solo, a convicted art thief turned CIA agent, attempting to liberate scientist’s daughter, Gaby (Alicia Vikander). On his trail and out to stop him is KGB agent, Kuryakin (Armie Hammer), who sports incidentally Ritchie’s own trademark cloth cap. The first sequence is the film’s best – Ritchie developing a new kind of car chase with the camera in a continuous shot focussing on one car, crash-zooming back and then zeroing in on the pursuing vehicle.

The limited success of the mission leads to Solo being forced to work with Kuryakin to find Gaby’s father who is close to developing a nuclear device for the highest bidder. Their mission takes them to Italy, where Kuryakin pretends to be Gaby’s fiancé and Solo plays at what he can get.

Cavill portrays Solo as if he were Jay Gatsby, a cultivated New Englander with a declamatory tone. You imagine him as the voice of a speak-your-weight machine, proclaiming to his customers, ‘healthy’ or ‘lard ass’. Unlike McCallum, Hammer attempts a Russian accent. He may offend Russian speakers but at least he makes an effort. He is the incredible Hulk dressed as a 1930s day labourer. He doesn’t do suits and has to contain his temper when faced with, for example, street robbers who threaten to take his father’s watch. Cavill and Hammer play nicely off each other; Hammer in particular easily eclipses the performance of his predecessor, McCallum.

Much of the film’s mid-section resembles one of those Stella Artois adverts where the hero achieves the appearance of upward mobility to afford to buy a drink – really he ought to go to a Wetherspoons. The scenes in Italy are caper-like rather than exciting, with an emphasis on background action. At one point, Solo tucks into a picnic whilst Kuryakin fends off attackers. There is an extended argument about whether a belt can be worn with a dress. Ritchie is Vanity Fair editor Tina Brown as movie director.

The villain is a woman, Victoria (Elizabeth Debicki) who cultivates an English accent and dresses like Audrey Hepburn. In Ritchie’s version of the 1960s, people smoke a lot less, but there is motor racing and electric chairs.  Unlike a Bond flick, no national monuments are harmed in the making of the movie.

The climactic chase features exo-skeletons of all purpose vehicles. At this point, you realise what a fool Jeremy Clarkson was for not being able to try out one of these on Top Gear. The film is partly designed to appeal to petrol heads wowed by vintage vehicles.

There is nothing in the plot that we haven’t seen before, except one stunt involving a car and a boat. There are plot twists and a mid-movie entry of Hugh Grant as Waverly, stepping without difficulty into the role vacated by the late Leo G. Carroll. Grant doesn’t have to do much acting but we like the way he refers to ‘curly wurly shoes’.

The Man from U.N.C.L.E. isn’t special enough to give modern blockbusters a run for their money, but it is fun. You may wonder why Solo isn’t curious about Gaby’s particular set of driving skills or why Kuryakin wears his father’s watch on a mission – is it waterproof? When the watch is stolen, it is arguably in safe keeping. You could liken the Solo-Kuryakin relationship to Holmes and Watson in Ritchie’s previous films; one is romantically unattached, the other would like to settle down. Like the Downey Jr-Law film, U.N.C.L.E. might get a sequel, or should I say close relation.