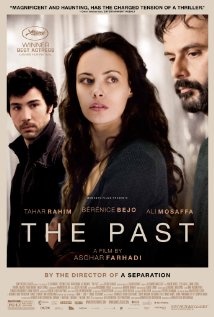 A SEPARATION, Iranian writer-director Ashgar Farhadi’s tale of a man struggling to cope with his wife leaving him, fighting to get custody of his young daughter and look after his ailing father, was an extremely impressive taut drama that kept you glued to the screen until the final frame – literally. I can’t say the same about Farhadi’s Paris-set follow-up, THE PAST, which feels less precise. It does however share some of A SEPARATION’s qualities.

First, there is the title. When you call the film ‘The Past’, you are stating that there is some momentous event that comes to haunt the central characters. This is not the case. THE PAST is really about the casualties of separation,. Specifically, it follows an Iranian man, Ahmad (Ali Mosaffa) who comes to Paris to sign the divorce papers that will allow his estranged wife Marie (Bérénice Bejo) to re-marry. We never find out exactly why the relationship broke down, except that Ahmad is not the father of Marie’s teenage daughter, Lucie (Pauline Burlet) – he lives elsewhere in the city and we never see him. Marie is struggling to settle and is fixing up a house for herself, Lucie and her fiancé Samir (Tahir Rahim) who has two young children of his own. He is technically not divorced. The mother of his children is in a coma. There is the question of cause.

The imprecision of the film is evident in the opening, a wordless scene in which Marie waves to Ahmad through the glass wall of an airport. He is going through customs and immigration control. She is on the other side. Ahmad wants to be taken to a hotel, but Marie insists that he stay with her. He observes her troubled domestic situation. The youngest of Samir’s children, Fouad (Elyes Aguis, who gives an astonishing performance for a young boy) is petulant; he kicks over paint. Farhadi throws us into Marie’s attempts to maintain order and discipline; she does not have the authority-by-right of a biological parent. Samir is not yet home.

In these scenes, Farhadi is not so much setting up plot rather atmosphere, evident when Marie drives Samir back to her house; her driving does not feel natural or comfortable. There is a gap between the way in which people want to behave and how their gestures come out. There is also emotional tension. We sympathise with Ahmad because he is setting Marie free; he has behaved correctly, brought presents and is enacting closure. Yet he has walked into a messy domestic scene. Fouad is troublesome and Samir won’t talk about the children’s mother in a coma. Maybe he shouldn’t be there; an unfortunate witness to lives in which he has no stake.

Far from being epic, Farhadi’s focus is on the mundane; an accident in Samir’s laundry that resulted in a stain on a dress and the resultant row. This builds into an extraordinary scene with a minor character that recalls the way the carer was treated in A SEPARATION. Someone poor, vulnerable, in this case, a laundry worker, Naima (Sabrina Ouazani) with an uncertain immigration status bears the blunt of anger as truths are revealed.

There is an idea in Farhadi’s film – A SEPARATION and this – that the truth doesn’t help. We can see characters struggling to do their best, but bad choices – outbursts – trip them up. As a drama, THE PAST isn’t shaped in a way that makes us want to the character to be extricated from the mess they find themselves in. Rather they are a witness to a mess but cannot bear to leave.

This in turn makes for a deliberately confrontational viewing experience. Ahmad does not have to be there. Neither does the audience! Why are we watching these unsettled kids and adults trying to forget about poor decisions by applying a new coat of paint and establish a new reality, with limited means? Farhadi doesn’t blame society for failed relationships; if anything there is an implicit criticism of Marie for (perhaps) not trying hard to enough to make the first relationship work. Is it right that she can move on to someone else, not make that relationship work and then try again? If anything, THE PAST says that if you fail at one relationship, you’ll keep failing. Farhadi doesn’t say this with guns and an atmosphere of Greek tragedy, rather with characters that to and fro, seeking comfort always elsewhere.

‘Comfort’, I think that would be a better title - the sense of belonging that people strive towards; the quality people find in company. THE PAST does not quite describe the film that we are watching, which has good performances and some compassion. It deals with an unresolved contradiction in people; the desire to move on and the damage that transit causes. ‘Damage in Transit’ might be another less catchy alternative.