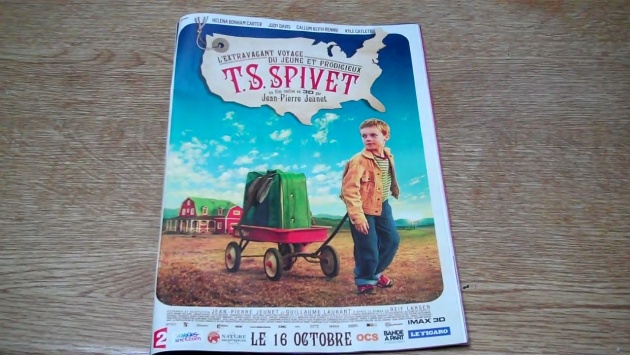 The French director Jean-Pierre Jeunet is at his best when he interrupts a story with a list of things he likes, humorously illustrated. I can well imagine him dramatising the diversionary opening of LIFE OF PI, a project to which he was long attached, in this way. Jeunet’s enthusiasms are childish – he loves physical comedy as well as the texture of things. So it was inevitable that he would make a children’s film and a movie in 3D. THE YOUNG AND PRODIGIOUS T S SPIVET is both. It has moments of unbridled cinematic joy but also darkness. Like LIFE OF PI, it too is in English and the adaptation of a novel (by Reif Larsen). Like LIFE OF PI it is an epic journey, this time across America rather than the sea, and death features prominently. Instead of a tiger, ten year-old T S Spivet (newcomer Kyle Catlett) is accompanied by the ghost of his brother who died in an accident involving a firearm. His brother liked to shoot anything that moves. T S liked to document things. The two were playing together (of a sort) when the rifle went off. T S blames himself.

Jeunet’s affection for a disparate group of characters – evident in DELICATESSEN, LE FABLEUX DESTIN D’AMELIE POULAIN and MICMACS A TIRE LARIGOT – is on display here. T S’ parents are an odd match. Mother (Helena Bonham Carter) is a scientist. Pop (Callum Keith Rennie) is a cowboy. His older sister (Niamh Wilson) is fascinated by beauty contests, in particular Miss America, the source of many a row with her Mother, who wants her to cultivate other talents. She has adjusted to life without her other brother but no one talks about the boy.

Nominally, the film describes how T S (short for Tecumah Sparrow) decides to enter a science contest to solve the mystery of generating perpetual motion. His answer, a wheel powered by magnets, wins him a top prize at Washington DC’s Smithsonian museum. But how does he get from Montana to Washington DC? Fortunately, he knows the times of all the passing trains. His effort to board one – pursued by railway workers - is a delight of physical comedy.

T S is better described as precocious rather than prodigious. Nothing fazes him, not even his brother’s ghost. In many ways the film is a throwback to HUCKLEBERRY FINN and THE LITTLE RASCALS. T S is profoundly self-reliant, though he is keenly cognisant that his father preferred his late brother to him. The film is full of voice-over, but for once I didn’t mind, since the visuals were always doing something else.

Jeunet and his co-screenwriter Guillaume Laurant ensure that T S is no superhuman boy. When he takes a leap, escaping a policeman, he hurts his ribs and they stay hurt. There are other reality checks too, when T S thinks about calling home. We see Mother grab the phone enthusiastically, then Pop and then his sister. But then we see T S staring at the phone booth in the dark; that’s not how his family is going to react.

There is a priceless visual gag when T S has to escape some railway workers searching for him – I won’t spoil the punch line. There is also the toughness of the Head of the Smithsonian (Judy Davis) who gives him his prize and then attempts to turn him into a media star.

At its heart, THE YOUNG AND PRODIGIOUS T S SPIVET is about how we respond to death through perpetual motion – keep moving, don’t think about it. T S’s journey teaches the family to stop and talk to each other; a very American message. T S threatens to exchange his family with acceptance from the scientific community, but his youth gets in the way (he’s an anomaly). The scientists are the nominal bad guys, with their pretensions and false smiles (T S refers to a scientific study noting the way in which such smiles can be detected). Jeunet’s film pays homage to natural rhythms and features the inevitable cameo from Dominique Pinon, her playing a hobo called Two Clouds. Davis’ utterance of a swear word may present a classification problem for the film in the UK and US, but the word is in keeping with Jeunet’s tonal edginess.