Film Review: TRANSFORMERS – AGE OF EXTINCTION – a re-boot is not the answer 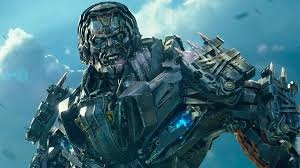 The fourth film of the TRANSFORMERS trilogy (gag copyright: Douglas Adams) AGE OF EXTINCTION sees the remaining Autobots – large robotic figures that can transform into vehicles for ease of integration into America’s gasoline-fuelled culture – on the run from humans. Director Michael Bay has given the franchise a re-boot. No more Sam Witwicky (Shia LaBoeuf, who one imagines must have threw up into a bag when he heard the news, nay, put the bag on his head, because I assume he only vomits on cue for money) or model Rosie Whittington-Huntley in the cast. (At one point a bus advertising Victoria’s Secret lingerie is destroyed – is the director making a statement?) Instead the main man is Cade Yeager (Mark Wahlberg) a Texas inventor living alone with his teenage daughter, Tessa (Nicola Peltz) making a living repairing VCRs, game consoles, but strangely nothing useful like a fridge, because his drop-box isn’t big enough - no wonder he’s behind with the mortgage payments and stealing electricity from a neighbour. With a friend’s money, Cade buys a truck for $150, dislodges a missile from its grill and discovers Optimus Prime (voice: Peter Cullen), who has read the story of ‘Androcles and the Lion’. How is Cade going to put his girl through college with the CIA descending on his property as part of ‘Operation Cemetery Wind’? With the Intelligence Agency (representative in facial hair, Harold Attinger aka ‘Frasier’s’ Kelsey Grammer, he’s hissening) in hock to Transformers from a distant planet, willing to trade a ‘seed’ for Optimus Prime (why exactly?), the plot revolves around scientists being able to make their own Transformers. ‘Don’t you get it?’ hisses a bad billionaire Joshua Joyce (Stanley Tucci) to doubting Optimus. ‘We don’t need you anymore.’ Now we know how LaBeouf feels.

Bay’s film sure takes an age. It is a whopping 165 minutes long – only one minute shorter than BOYHOOD. You discover your threshold for CGI Bay-hem as buildings are destroyed in two continents – the finale takes place in Hong Kong and Beijing as part of a co-production thing. Cade has to get over the fact that Tessa has a boyfriend, Shane (Jack Reynor, from WHAT RICHARD DID) aka ‘Lucky Charms’ who is a rally car driver, which is a pretty handy profession for this franchise. He (Shane) is 20; Tessa is 17. Shane keeps a card in his wallet that spells out the ‘Romeo and Juliet’ clause - they met in college when they were both under age, so have evidence of a continuing relationship; plus they speak in Iambic pentameter. Why not fake ID for buying alcohol, man?

There’s not much talk about the All Spark in this one. Instead, there is the bomb-Bey-stic assertion that in 2007 cinema was revolutionised (Cade finds Optimus Truck in a cinema that closed that year). ‘Now they’re all sequels and blockbusters,’ moans the former owner, as if THE ARTIST and 12 YEARS A SLAVE never happened. (You wouldn’t get AGE OF EXTINCTION playing in Michael Moore’s movie house, dude.) At one point, Cade appeals to corporate giant Joshua, ‘you’re an inventor, so you care’ as opposed to Attinger who thinks strategically and doesn’t mind collateral damage.  Attinger’s villainy is defined as wanting to protect Americans rather than humans per se.

Joshua’s company has been messing with the body parts of Megatron, the leader of the Decepticons, for his prototype. They have discovered ‘Transformium’, the base metal from which Transformers are made – cue from some very ropey visual effects that seem like animation. At this point, my eyes started to roll, quite difficult when you’re wearing 3D glasses.

The Earthling cast list is not the only one to get a make-over. Now Bumblebee sounds like John Goodman with the face of Randall ‘Tex’ Cobb, complete with beard and cigar. (Why exactly?) Another of the Autobots is voiced by Ken Watanabe, who sounds like an Arnold Schwarzenegger parody account on social media.

In the climax, five Autobots take on fifty man-made Transformers – and you can guess the result; since when did logic enter into it? Wahlberg is a good anchor. He spent an entire film talking to a bear, so interacting with giant talking machine like beings doesn’t throw him. Because we’ve seen Wahlberg recent in LONE SURVIVOR, we totally buy his facility with weapons, which isn’t logical in other contexts. TRANSFORMERS – AGE OF EXTINCTION is a loud, thudding flat tyre of a film. It doesn’t signify the end of cinema, rather a lack of taste. As for the 3D, it is a rip-off conversion job, apparent in the opening minutes, invisible by the end.  It has one laugh, involving a transformation into a metal dinosaur. Did I say that the film re-writes the Big Bang theory and has a religious subtext about the importance of defending family, with a broad definition of that term? At the end, the Autobots don’t know what they are made for, but they know what they must do – turn up for another sequel. Did I also say that Sophia Myles is another cinema’s most unconvincing geologists?