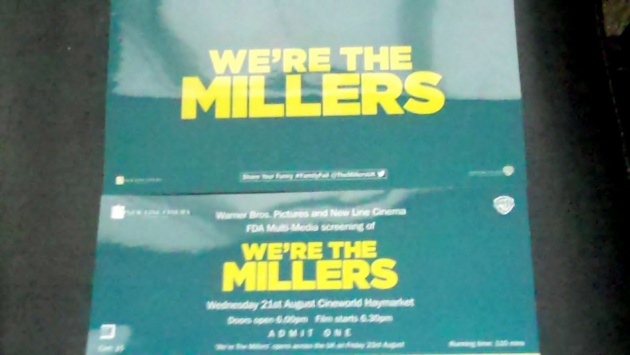 Pot comedy has come a long way from Cheech and Chong – now they don’t even inhale. An example of this is WE’RE THE MILLERS, a modest hit in the United States and likely, if the aggressive marketing campaign and healthy dose of advance previews is anything to go by, to make an impression here in the UK.

The lead character, David (Jason Sudeikis) deals weed. He also, incidentally, doesn’t pay taxes. He gets his come-uppance when he reluctantly comes to the aid of a kid in his building, Kenny (Will Poulter with a nerd’s haircut) who in turn has come to the aid of a young runaway, Casey (Emma Roberts) being troubled for her mobile phone. In the ensuring chase, David himself is robbed of his slush fund. He owes his supplier, Brad Gurdlinger (Ed Helms) $43,000 so is forced to pick up ‘a smidge of pot’ from Mexico to cancel the debt and also make some cash. He gets the idea that he can cross the border from Mexico to the US with an RV (Recreation Vehicle) full of pot if he travels with his family. But David is a single guy. He never see him with a woman because he’s a small time pot dealer and therefore not worthy of a back story. So he decides to invite his neighbour, Rose (Jennifer Aniston) – ‘not my real name; it’s Sarah’ – to be his unlawfully fictional wife. They travel on their real passports so I’m not sure how that works.

The premise is that US Customs Officials don’t check travel documents. Why is it I had my passport checked by US Border Guards when I crossed from Canada to the United States? ‘Hey, he’s Canadian. He wants to pay for healthcare. That sounds suspicious to me.’ In short, there is a little stretch of the imagination going on. No matter. Rose, Casey and Kenny have a need for cash that overrides possible imprisonment. Besides what could go wrong?

If you are familiar with IDENTITY THIEF you’ll recognise a plot development, namely that after David and family pick up the marijuana, bad guys go after them. If you’ve seen RV, Robin Williams last name-above-the-title screen hit (I don’t count HAPPY FEET 2), you’ll remember that the family are bound to run into another family of squares (Nick Offerman, Kathryn Hahn and Molly Quinn, filling in for Jeff Daniels and family in RV). Then there is the mistaken impression that David and Rose are into group sex. (I’m sure I’ve seen that in a movie that wasn’t THE ICE STORM or PERFUME, but it’ll come back to me.) The only thing that is original is the stash of pot that is passed off as a baby. Original but frankly unbelievable! There is also an explicit ‘body horror’ joke that gets a big laugh – one of the few that the trailer doesn’t give away, so I won’t either.

In the film’s worst scene, Rose demonstrates her credentials as a stripper, which she singularly fails to convince. It is not that Aniston cannot dance or hit her marks. She does not do sultry. Rather she wears a pained expression, or alternatively looks like she’d rather be posing as the Statue of Liberty, albeit in brassiere and panties, which is kind of weird.

You don’t really buy that the fake family would become a real one, or that Casey would risk her share of the loot for fireworks or hanging out with an Ashton Kutcher lookalike with a misspelt tattoo.  But these are the plot developments guaranteed to make us like the characters.

I’m not sure what Emma Roberts is doing with her choice of roles. She’s clearly too old for teen comedy even though she cast as a teenager here. She is clearly not going to be a clone of her aunt, Julia Roberts. I would suggest doing a Jodie Foster, going back to school and returning to film when there is a role that’s worth it; but since when does Hollywood royalty need career advice?

Jason Sudeikis can handle a quip and express anxiety with subtlety but he’s not a runaway comedy scene-stealer comedy; he’s in the Jason Bateman mould, though he looks like he’ll sell you Payment Protection Insurance. He cedes the standout male performance to British actor Will Poulter who is utterly convincing as the cartoon nerdy teen who likes JLF’s ‘Waterfalls’ and can rap. He has the best scene when Kenny gets kissing lessons, though you can see the pay-off a mile away.

It all ends with a MY BLUE HEAVEN-SAVING GRACE moment, which is neat but I hope does not promise a sequel. (Please!) The audience laughed but my humour receptors were not stimulated. I guess I too didn’t inhale.