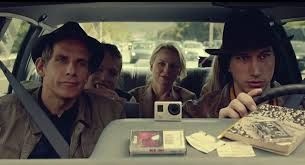 I remembered the first time I knew I was old. I was watching the new CGI version of Thunderbirds – no Jeff Tracy and a character ill-advisedly called Kayo (not OK by me) – and I suddenly remarked, ‘I can see the strings.’ ‘No’, I was told, ‘that’s just glaucoma.’ 44 year old documentary filmmaker Josh (Ben Stiller) makes a similar discovery in Noah Baumbach’s comedy, While We’re Young. His interaction with an upcoming docu-talent Jamie (Adam Driver) and Jamie’s ice-cream making wife, Darby (Amanda Seyfried) teaches him that youth is nothing to admire. Young people give you a false sense of your own importance whilst you pick up the check at lunch. They introduce to a world of walking disused railway tracks, street beach parties and taking mescaline as part of a purging ritual that doesn’t lead to happiness – especially when someone else takes your bowl. (‘I’m throwing up you s-t,’ Josh is told). Instead it alienates you from friends who have known you for years. Buying a hat is particularly ill-advised – it would be crushed under a bicycle helmet (not that this quite happens in the movie). It takes Josh approximately two-thirds of the movie to release he is being played. He never sees the VHS copy of his documentary, Power Elite that Jamie reportedly bought on eBay.

Josh reminds you of the documentary filmmaker that Woody Allen played in Crimes and Misdemeanours who is trying to make a film about a very serious thinker but takes an assignment to profile a TV producer (Alan Alda, uttering the film’s memorable line, ‘if it bends it’s funny’). Josh is waiting for grant money to complete his six-and-a-half documentary that is mostly about a political history professor talking – the footage is shot over an eight year period, betrayed by reverse shots of Josh with varying facial hair. Baumbach has some fun showing the professor speaking whilst cutting up his food and breaking off in mid sentence to go to the toilet – he pees with the toilet door open. Josh gives lectures where he quotes Jean-Luc Godard, ‘documentary is impersonal; fiction is personal’. Josh’s thesis is that documentary can be personal. It doesn’t have to be streamed you tube type footage, though to make his argument, he would ideally like power point to work.

At his lecture, he meets Jamie, who commends him for Power Elite. ‘How did you film that bit with the dog?’ he asks admiringly. ‘We had a camera and just pointed it,’ replies Josh. Josh is charmed by Jamie’s energy – he makes things. Instead of buying a desk, he proposes building one. Jamie’s loft apartment is filled with 12 inch albums rather than CDs. He has Thin Lizzy and Mozart – ‘his taste is so democratic,’ says Josh admiringly. Jamie infuses Josh with energy. Josh’s wife, Cornelia (Naomi Watts) is similarly charmed and joins Jamie’s wife for hip hop class – she is happier there (though doesn’t quite have the strength of her classmates) than she is with a group of young mothers listening to children’s entertainers. The babies start crying and she wants to leave.

There is a charming montage in which the two couples are contrasted – Jamie and his wife play board games, Josh fiddles with his mobile phone. When the couples struggle to remember an ingredient, Josh wants to look it up on his phone, but Jamie would rather not. He seems rather too good to be true. He has a brilliant idea for a mini-documentary about people relating the plots of their favourite films that they haven’t seen for a long time, but his latest idea is creating a profile page on Facebook, getting people to contact him but instead of interacting over the web, going to see them in person. ‘That’s just real life,’ says Josh.

Stiller’s technique as a comedy performer is to endure humiliation bravely, to stand up for himself but not be quite up to the task. His characters are sincere and committed: he adopts the steady-eye stare of an action hero but stops short of throwing a punch. The part of Josh allows him to do this and there is comedy in the sight of the very tall Jamie walking backwards whilst Josh advances towards him, even though we know he won’t hit him.

There is an interesting piece of casting with Charles Grodin, best known to those under forty for Midnight Run, playing Josh’s father-in-law, the documentarian Leslie Breitbart. Both Grodin and Stiller have played the same part in The Heartbreak Kid; the remake with Stiller was directed by the Farrelly brothers. Leslie saw Josh as a kind of protégé but Josh resisted this. Leslie gives Josh notes on his movie (take out a section on Turkey) and offers to put him in touch with a hedge fund manager. The pitch that Josh makes reveals his shortcomings as a verbal communicator – he starts off with a statistic about the percentage of African American males in prison (9%) – a hot topic also raised in Get Hard. ‘So it’s a black Shawshank!’ ‘No!’ – Then Josh talks about power. Finally, he proclaims, ‘it’s about America.’ ‘Mostly, he adds, ‘it’s about this guy talking.’ ‘Do you animate his words?’ ‘No. He’s kind of boring.’ Josh could not sell a bottle of water to a man dying of thirst.

The first half of the movie is a behavioural comedy that peaks with Josh and his wife discovering that they haven’t been invited to a party. As guests file in and are greeted enthusiastically, Josh carries on a conversation with the hosts. The second half, in which Jamie’s Facebook project leads him to the discovery that an old friend served in Afghanistan, is plot driven and ends with Josh roller-skating towards the Lincoln Center.

At the heart of Josh’s problem is his wife’s childlessness. They are seen in the opening scene craning over a baby but unable to remember a nursery rhyme (‘I think ‘little piggies’ is about toes’) before the baby is reunited with its mother. The couple have accepted their childlessness, but socially they are separating from their friends. The conclusion is rather conventional but Baumbach is definitely on to something. While We’re Young might not be a personal fiction film in the way The Squid and the Whale was but it does feel well-observed, offering a steady stream of chuckles. The documentary filmmaker hero may stop it becoming a multiplex hit, but it’s more than a movie for those who know their Maysles from their Pennebaker – by the way neither of those are makes of car. Baumbach’s love of David Bowie (evidenced in Frances Ha) continues over the end credits when ‘Golden Years’ is played.