Film Review: X + Y: Greater than the sum of its parts 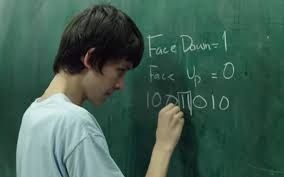 Cinema can be a place for mathematical problems. If I have five mint imperials and there are six people in the cinema using their mobile phones whilst the film is on, how many do I use to signal my dissatisfaction? The answer is one, because I am sure to get roughed up after I hit the wrong person. The British film X + Y tests its audience in a positive way. When I first mentioned the title to someone, they thought that it referred to chromosomes. This is partly true, because director Morgan Matthews’ film, inspired by his earlier documentary, Beautiful Young Minds, is about a teenage maths prodigy, Nathan Ellis (Asa Butterfield) who falls in love with a Chinese girl, Zhang Mei (Jo Yang) during a Maths summer camp in Taiwan.

Nathan is on the autistic spectrum, though atypical of children of his condition as he is deeply talented. He does insist on seven prawn balls and ordering meal number 47, because it is a prime number, but at some point he will have to eat his greens. His Irish-born father Michael (Martin McCann) died in a car crash when Nathan was nine. Nathan misses him deeply, won’t hold his mother’s hand at the funeral and retreats into the sum of all tears. Oh and he scribbles equations, which make no sense to his mother, Julie (Sally Hawkins) as she’s ‘not clever enough’.

Autistic people can be rather cruel, excluding others and disappearing into their own world. I would say they are mean – and they like means (averages). But like anyone else they develop coping strategies, little things that give them peace and security. Like wavy lines – just as long as you don’t do that to their hair (I speak from experience).

Nathan visits the big school at a young age when he meets a jaded mathematics teacher, Mr Humphreys (Rafe Spall) with early stage multiple sclerosis. Mr Humphreys walks with a stick, but carries a chip. He was once a mathematics prodigy like Nathan and took part in the International Mathematics Olympiad, or IMO. I always thought IMO stood for International Maritime Organisation – or ‘Imotionally vexed’, whatever that means. But Mr H never made the finals and disappeared into low grade academia - that is, pinching marijuana joints from his students. (James Graham’s screenplay does have the most predictable punch lines.)

When Nathan grows into Asa Butterfield, sullen, saucer-eyed, without a hint of warmth or humour, he passes the British maths summer school entrance exam. There he joins fifteen other geeks schooled by Richard (Eddie Marsan) vying for six places on the British team. The IMO finals takes place in Cambridge, but first Nathan has to make the team. He shares with another kid on the spectrum who does not want forced proximity – just as well mathematicians can work from home.

Refusing to phone home, he leaves Julie and Mr Humphreys to get it together. They are attracted to one another. Nathan ‘accidentally’ drops his telescope on a glass ceiling of the conservatory which sends a negative message – people in glass houses shouldn’t show boners. (I’ll atone for that later.) Mr Humphreys has to face up to group therapy, that is, being hugged by strangers. I can tell him from experience that all he needs to do is show up on Victoria Embankment as the New Year chimes ring in, and he’ll get plenty of hugs without having to confess anything.

The acting is terrific, not just from Butterfield, who is more compelling here than in his last two starring roles, The Boy in the Striped Pyjamas and Hugo. Spall, the son of actor Timothy Spall – and we’ve reached the stage when we really don’t have to point that out any more – is a revelation, mining Mr Humphreys for charm and self-criticism. Maths has never seemed more gripping and vital – not just because you need it to budget. There is a scene when Nathan has to go to the front of the class and prove that a sequence (involving turning playing cards over) will lead to zero and Butterfield makes it come alive. He truly looks like he knows what he’s talking about, though don’t ask me to repeat it; something about unturned cards being one, cards turned over being zero, binary numbers in a sequence depreciating in numerical value. His younger self, played by Edward Baker-Close, is fairly terrific too.

Heartbreak, self harm, disappointment in love, a piano, Chinese, the Fibonacci sequence, Monty Python’s ‘Dead Parrot’ sketch and catching your own dinner all feature in a film that hooks you in and never lets you go. The plus sign in the title is deserved. It’s definitely B +++ and well worth engaging with.