At the bottom of a garden, in a small Scottish town, there lived, side by side, two flowers.

One of the flowers was called Rose and she was very beautiful. Every day she would wake up, give a really loud yawn and her petals would open.  Then she would talk all day about how beautiful she was and how pretty she was and how unfortunate it was that the other flowers were not as lucky as she was!

The birds were very tired of listening to her and even the honey bees avoided her as she kept telling them, at every given opportunity, that she was as sweet, even sweeter, than their honey and how she was invited to sing at all the garden festivals. She had sung at the ladybird’s wedding, the centipede’s birthday party, the beetles’ anniversary, and had been the star attraction at the Thistles New Year party!!

She went on and on and on. Her voice, not as sweet as she thought, would ring throughout the garden and out into the woods where the robins and sparrows were hiding! When evening came she informed everyone that she would now be going to sleep and she would see them all in the morning and if they were very lucky she would sing her favourite song to them.

The other flower was very different to Rose. Her name was Blue-belle. She was also very pretty. Blue-belle would awake in the morning and gently dance with the breeze. She said a quiet hello to all the birds and insects around her and they liked her.

This troubled Rose very much. She showed her dislike by singing out loud, driving away Blue-belle’s friends. This upset Blue-belle and she would try to hide this by only crying when it rained so no-one would see her tears.

One day the sun rose high in the sky. It was a very warm summer morning. The sort of morning Rose loved as all the insects and animals would be out playing and she would have an instant audience. Rose tried to stretch and yawn loudly but nothing happened. She tried again, even harder. Nothing! She tried even harder, so hard that she woke Blue-belle. ‘Is anything wrong Rose?’ asked Blue-belle.

‘No!’ was Rose’s quick reply. ‘I’m fine…just a little tired after all my beautiful singing last night.’

Blue-belle knew something was wrong. Rose always awoke, stretched, yawned and talked and sang non stop from very early in the morning to very, very late at night.

Blue-belle waited a little while but Rose still hadn’t moved. Her petals still stuck by her side and her voice wasn’t as clear as it normally was. Rose tried to move again but it was no use. She was stuck. Rose had never been stuck in her life and she didn’t know how to ask for help. Blue-belle knew this. She asked Rose if she wanted some help. ‘No thank you’ said Rose ‘I am very capable of dealing with this situation thank you very much’.

Time passed. Blue-belle was becoming very concerned as she knew that Rose needed the sunlight to keep her healthy and something needed to be done. Blue-belle called out to her friends. As she had a very quiet voice no-one heard her over the noise of the insects and the birds that were playing tag.

She called out again. Still no one heard her so she decided that in order to be heard she had to do something she had never done before. She sang. Before she knew it the song was out of her mouth and into the air.

When they heard the beautiful sound, every animal and insect in the garden stopped suddenly and grew silent. They all looked frozen. Blue-belle’s voice was beautiful. Rose could not believe it. It was very different to her voice and she didn’t like to admit it but it did sound really nice!

Blue-belle stopped singing. All the animals ‘unfroze’ and came running. ‘Blue-belle that was amazing’ they called. ‘Wow!’ they said. Blue-belle was embarrassed and thanked them in her soft voice. She then talked loudly. So loud it frightened her and everyone else. ‘Sorry’ she said. ‘Now I need your help’. ‘Rose is stuck and she needs to be unstuck... will you help her?

All the animals and insects were quiet.

They remembered all the horrible things Rose had said about them and her incessant talking and not very good singing. They were still very quiet. Just then the smallest of the ants spoke out. ‘I think we should help her as she needs help and it could have happened to any one of us.’

‘I agree’ said one worm. ‘Yes let’s do it’ said the spiders. Soon everyone was running around trying to help. ‘We need water’ said Blue-belle and the ants went to get that. ‘We also need a bit of cloth’ she added so the beetles went to get that.

Slowly the water washed away the stickiness on Rose’s petals and carefully the beetles washed her so that she was able to stretch out gradually and feel the heat and comfort of the sun.

Rose had never said thank you in her life. It was very difficult for her. She tried and for the first time ever she couldn’t say what she wanted to say. She tried again ‘Than…k…you Blue-belle and to everyone else’. Everyone cheered.

Rose began to cry. She was sorry she had caused so much trouble in the garden and promised to be nicer and kinder and not to talk and sing as much and to listen to others. She then looked straight at Blue-belle. ‘I’ve been very selfish and I’m sorry. You didn’t have to help but you did. Your voice is very beautiful and so are you.’

She turned to all the animals. ‘You are all beautifully different!’ Everyone cheered and wiped away the odd tear.

‘Yes Rose. Of course we can be friends’…and to this day they are still the best of friends.

If you ever visit this little Scottish town and find yourself at the bottom of a lovely garden just listen. You may just hear the singing of Rose and Blue-belle carried on the wind…. 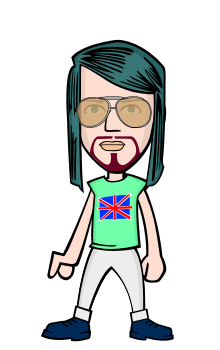 I love to enjoy my life every day and on every step of my life. My parents teacjes me that how to respect other they say give respect get respect i love my parents all my life.

When I tried To Say How Beautiful You Are. She Said Gently'How Stupid You Are' Unfortunately She Did…