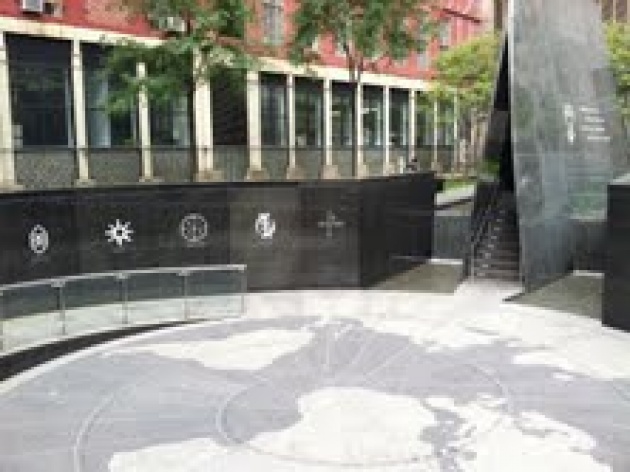 I've always been fascinated by how different people around the world - and throughout history - take care of their loved ones when they pass away. These ceremonies tell a lot about the degree of humanity and the way a specific society is built, and represent a solemn manifestation of the tradition and culture of a specific civilization.

In Tibet, I was told that the body of the person is considered
an empty shell, worthless after the spirit has departed. Therefore it's dismembered, and left out to be consumed by nature (sky burial). Most of the country is surrounded by snowy peaks, and the ground is too solid for traditional earth internment. In addition, being mostly above the tree line, there is not enough fuel for cremation. In Mongolia the deceased are disposed on the open ground as well (air sacrifice). In this culture, though, a stone outline is placed around it, and then the village dogs that have not been fed for days are released to consume the remains. What is left goes to the local predators. When this past summer I traveled through the country, I often saw those stone outlines (without the corpse), which were left as a reminder of the person. The Hindu cremate their dead on piles of wood, and then throw the remains in the rivers. On several occasions I have participated to such ceremonies, in which the smell was so overwhelming I had to cover my nose with a scarf. In Cambodia I saw wooden tabernacles placed in front of most huts, from the poor to the rich. Foods ad beverages are left inside for the souls of the departed relatives to feed when necessary. These offerings also ask the spirits of the relatives to watch over the lands and the families left behind. I learned from the Maasai in Tanzania that they bury only their chiefs, and the remains of common people are left outdoors for predators to dispose of, since they believe that dead bodies are harmful to the earth.  To them when you are dead, you are simply gone. There is no after life.

While the war in Afghanistan still goes on, Afghan women and men follow the Islamic way of burial. First, the body of the deceased is washed thoroughly with water. If the deceased is a man, he is washed by men; if it's a woman, then women wash her. Then it's wrapped with a white cloth and put it on a carrier to be taken to the graveyard. I found interesting that while the body is being wrapped, no tear drop is supposed to fall on it, otherwise it has to be washed again. In the grave the head of the dead body is supposed to face the qabla in Mecca. After the body is buried there is a funeral in the mosque. For 40 days grieving and prayers follow, and the deceased is still served dinner, which I found a fascinating detail of this area of the culture of Afghanistan.
This past Saturday I visited the African Burial Ground, in downtown Manhattan. From about the 1690s until 1794, both free and enslaved Africans were buried in this location, outside the boundaries of the settlement of New Amsterdam, later known as New York. Lost to history due to landfill and development, the grounds were rediscovered in 1991 as a consequence of the planned construction of a federal office building. The museum is very interesting, mostly because of what this meant for those families of African-Americans. In a world in which this community was treated worse than animals, and denied any type of respect and dignity, funerals were among the few ceremonies that could be done following the true tradition of their ancestors, although they had to be planned at dusk, and no more than 12 people could legally attend to mourn the dead. The monument outside is magnificent. It's located in a peaceful yard surrounded by dozens of symbols wishing good fortune. I've been in this city for 11 years and never visited this wonderful place. Your turn.
Giacomo Cresti