Characteristics of Cleavage, Fracture and Joint: Foliated metamorphic rocks e.g. schist has Flow Cleavage which are important in shear strength for the foundations of dams, reservoirs, tunnels and bridges
Flow Cleavage: Metamorphic rocks show Flow Cleavage due to the reason of parallel arrangement of all the planar crystals, taken place during metamorphism
Secondary or Minor Structural Features:
These are usually caused in Sedimentary Rocks by Erosion
(1) UNCONFORMITY: It is defined as the missing of a layer or layers of strata of Sedimentary Rock usually due to the process of weathering; the un-interrupted (non-missing / continuous) structure of the strata of Sedimentary Rock is known as Conformable, such structure is known as Conformable Structure and such condition is known as Conformity  Unconformable Structure and Unconformity 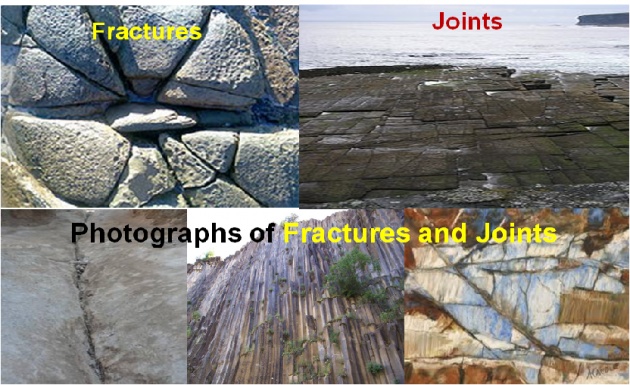 If the sequence of unconformity is parallel, it is known as Disconformity. If it is not parallel, then it is known as Angular Unconformity or Non-conformity
OVERLAP: It is a horizontal extension of the upper beds lying in a horizontal series (of rock strata) beyond the extremities of the lower beds usually caused (arranged) by the slanting edge of the river, lake or sea or by a fault line
(3) OUTCROP: It is an exposed stratum or body of a vein (mineralised zone) at the surface of the earth; also known as Cropout. It is also described as the portion of a rock formation or stratum that breaks the surface of the ground and exposed to the atmosphere. It has two types: Inlier and Outlier
(a) INLIER: It is defined as a circular or elliptical outcrop of an older rock surrounded by the outcrop of younger rock(s) 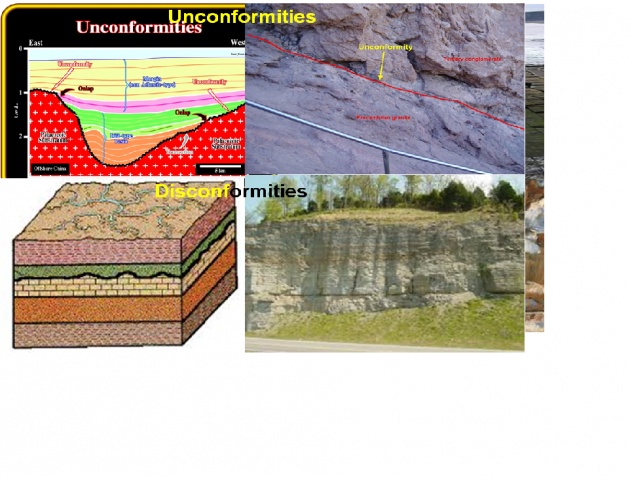 (b) OUTLIER: It is the reverse of Inlier – it is defined as an outcrop comprising a group of younger rocks separated from the main mass, surrounded by the outcrop of older rock(s) 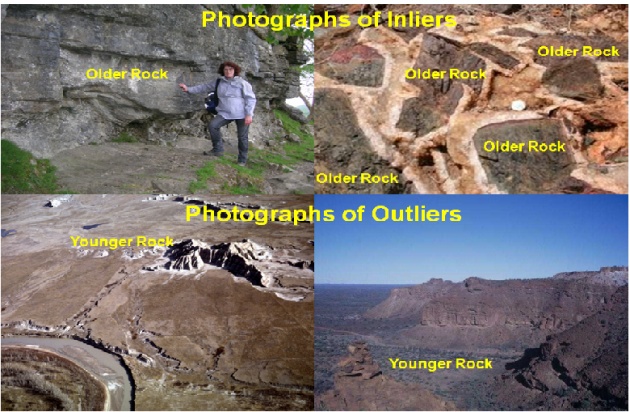