Georgia- a Climate of Fear & Intimidation 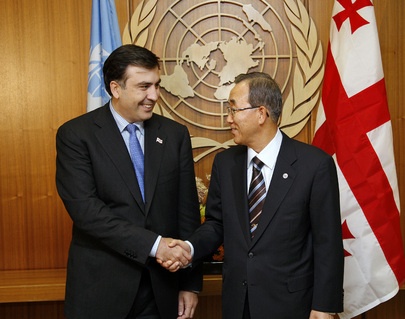 “It is clear that all these restrictive efforts have been put in place to deliberately prevent and restrict certain individuals from standing in the upcoming parliamentary and presidential elections,” said Maina Kiai, UN Special Rapporteur on the rights to freedom of peaceful assembly and of association as he warned of increasing climate of fear and intimidation against opposition parties, labor unions and members of non-governmental organizations (NGOs) in Georgia. (From UN News Centre) “The role of freedom of association in this context is to give hope to any political party that it can genuinely compete in elections. In the case of Georgia, there is an unequal political playing field,” he said. Mr. Kiai, who recently finished an eight-day mission to the country, warned that a number of legislative amendments adopted in late December last year by the Georgian Parliament restrict the freedom of association. Labor Union Freedom: The independent expert also noted that the situation of labor unions is one operating in a very difficult environment, as there have been allegations of dismissals of public and private employees for supposedly supporting opposition parties. “Georgian labor laws provide for easy dismissal of workers, with no requirement to provide reasons, as long as the minimum monthly compensation is paid,” Mr. Kiai said, noting that this can inhibit the freedom to form, organize and operate trade unions, as employers have almost unfettered discretion and can find excuses to fire workers who try to form and operate trade unions which they may not want. Repression of & Violence Against Protesters: Mr. Kiai also referred to the events of 26 May last year, when he said police resorted to excessive use of force to disperse an assembly in Tbilisi, the capital, and called for an investigation of those responsible for the violence. “A new, independent and transparent investigation must be undertaken with the participation of all stakeholders – which include opposition leaders, civil society representatives, the Government and representatives from the international community to ensure that all views and perspectives are taken into account, and that there is accountability for the clear excessive use of force that occurred. In the absence of that, the perception of impunity and dissatisfaction towards the Government will prevail.” Full Statement of UN Special Rapporteur Kiai - www.ohchr.org/en/NewsEvents/Pages/DisplayNews.aspx?NewsID=11818&LangID=E By Ambassador Muhamed Sacirbey – Follow @MuhamedSacirbey Facebook = Become a Fan at “Diplomatically Incorrect” Twitter – Follow us at DiplomaticallyX War Crimes Justice Channel - diplomaticallyincorrect.org/c/war-crimes-justice UN Photo - Georgia President Mikheil Saakashveli with UNSG during better times (2008)

Vote for your favorite Judo team and Collect your $3 RewardNOW! Every year, the NY Open Judo Team C…

Coca-Cola: isa corbonated soft drink .It is produced by The Coca-Cola Company of Atlanta, Georgia an…

hello bitlanders this is my first post/blog. i will shortly share my recent short trip to Georgia. …