"G.I. Joe: Retaliation" Blasts Away Competition with $41.2 Million; "The Place Beyond the Pines" Makes Headlines at Specialty Bo 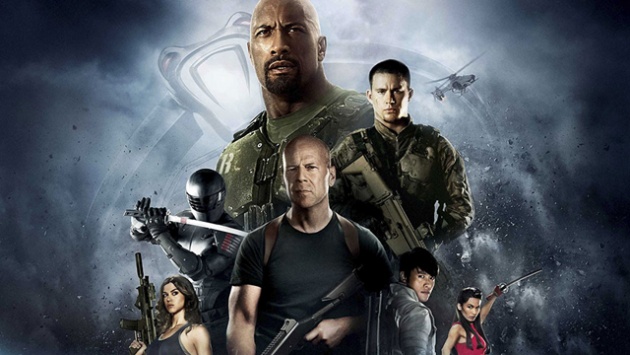 Good things come to those who wait, at least for Paramount Pictures. The studio shelved "G.I. Joe: Retaliation" and waited nine months from its original release date and voila, the sequel hit box-office gold. The action extravaganza featuring Dwayne "The Rock" Johnson, Bruce Willis, and Channing Tatum debuted at No. 1 with $41.2 million. The film opened Wednesday at midnight bringing its domestic total to $51.7 million.

Previous weekend's box office champ, "The Croods," from DreamWorks Animation and 20th Century Fox slipped to No. 2 with $26.5 million. At No. 3 was "Tyler Perry's Temptation" with $22.3 million.

Not doing so well was Stephenie Meyer's "Twilight" follow-up, "The Host." Starring Saoirse Ronan, Max Irons, and Jake Abel, the sci-fi romance debuted at No. 6 with just $11 million.

Good news at the specialty box-office was brought upon by Derek Cianfrance's "The Place Beyond the Pines." Opening in just four theaters, the Focus Features film starring Ryan Gosling, Bradley Cooper, and Eva Mendes grossed $270, 184 for a per theater average of $67,546.

Here's the estimated Top 10 Box-Office Films for the weekend of March 29th: