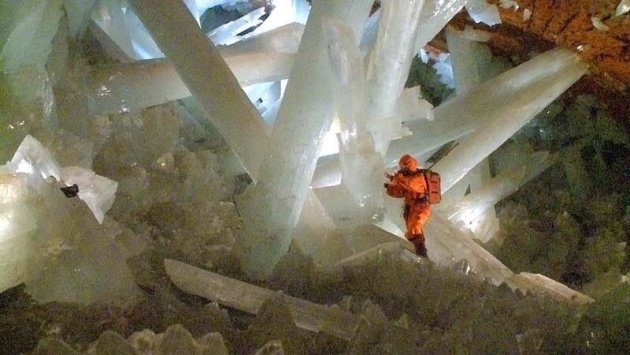 The Naica Mine of Chihuahua, Mexico, is a working mine that is known for its extraordinary crystals. Naica is a lead, zinc and silver mine in which large voids have been found, containing crystals of selenite (gypsum) as large as 4 feet in diameter and 50 feet long. The chamber holding these crystals is known as the Crystal Cave of Giants, and is approximately 1000 feet down in the limestone host rock of the mine.

The crystals were formed by hydrothermal fluids emanating from the magma chambers below. The cavern was discovered while the miners were drilling through the Naica fault, which they were worried would flood the mine. The Cave of Swords is another chamber in the Naica Mine, containing similar large crystals.

The Naica mine was first discovered by early prospectors in 1794 south of Chihuahua City. They struck a vein of silver at the base of a range of hills called Naica by the Tarahumara Indians. The origin in the Tarahumara language seems to mean "a shady place". Perhaps here in the small canyon there was a grove of trees tucked away by a small canyon spring.

From that discovery, until around 1900, the primary interest was silver and gold. Around 1900 large-scale mining began as zinc and lead became more valuable. 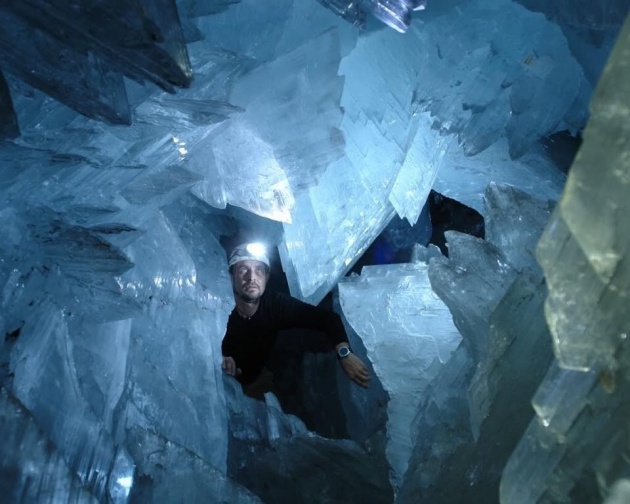 During the Mexican Revolution the mine was producing a great deal of wealth. Revolutionary troops entered the town and demanded money from the owners. One of them was assassinated when he refused to pay, causing the mine to shut down from 1911 to 1922.Just before the mine was closed, the famous Cave of Swords was discovered at a depth of 400 feet. Due to the incredible crystals, it was decided to try to preserve this cave. While many of the crystals have been collected, this is still a fascinating cave to visit. In one part there are so many crystals on one of the walls, they appear to be like an underwater reef moving in a gentle undulating motion in an ocean current.

In April 2000, brothers Juan and Pedro Sanchez were drilling a new tunnel when they made a truly spectacular discovery. While Naica miners are accustomed to finding crystals, Juan and Pedro were absolutely amazed by the cavern that they found. The brothers immediately informed the engineer in charge, Roberto Gonzalez. Ing. Gonzalez realized that they had discovered a natural treasure and quickly rerouted the tunnel. During this phase some damage was done as several miners tried to remove pieces of the mega-crystals, so the mining company soon installed an iron door to protect the find. Later, one of the workers, with the intention of stealing crystals, managed to get in through a narrow hole. He tried to take some plastic bags filled with fresh air inside, but the strategy didn't work. He lost consciousness and later was found thoroughly baked.When entering the cave our group is issued helmets, lanterns, rubber boots, and gloves. One must then be driven by truck into the main mining tunnel called Rampa Sn. Francisco. While the vertical drop is approximately 1000 feet, the drive is almost a half mile long. The heat steadily increases and women have been observed to begin "glowing". The truck stops in front of a concrete wall with a steel door. The intense heat can prevent brain functioning. 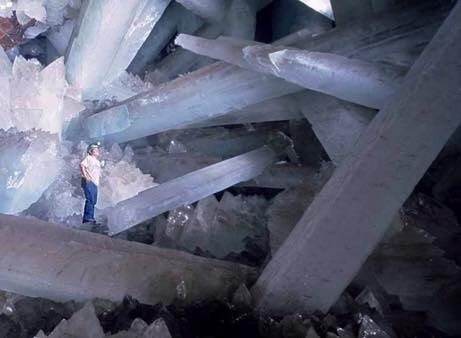 At the end of the tunnel there are three or four steps into the aperture of the cavern itself. It is in this short tunnel. In this short distance the temperature and humidity goes from being uncomfortably warm to literally a blast furnace.

Momentarily, the penetrating heat is forgotten as the crystals pop into view on the other side of the "Eye of the Queen". The entire panorama is now lighted and the cavern has a depth and impressive cathedral-like appearance that was not visible on earlier trips with just our headlamps.When inside the great cathedral of crystals, the pressure of intense heat create a gamut of emotions and perhaps hallucinations. One can only remain for a short period of time.

Geologists report that these natural crystal formations are incredibly complex, yet so simple. They have a magical or metaphysical personality independent of their chemical structures. There is a magma chamber two to three miles below the mountain and that heat from this compressed lava travels through the faults up into the area of the mine. Super heated fluids carry the minerals the miners are seeking as well as form the crystals. The mine is ventilated; otherwise, it could not be worked. Some parts, however, are not air-conditioned, such as the Cave of the Crystals, and there you feel the heat from the magma deep below. The fluids travel along the Naica fault, enter voids in the bedrock, and then form entirely natural structures that are not easily explained scientifically.

In April 2000, the mining company became confident that the water table on the other side of the fault had been lowered sufficiently to drill.

When they did this, it is almost as if a magical veil of reality was breached and an entirely new world was discovered. Two caverns filled with the Earth's largest crystals were immediately revealed. More discoveries are expected to be made in this magical kingdom of intense natural beauty. 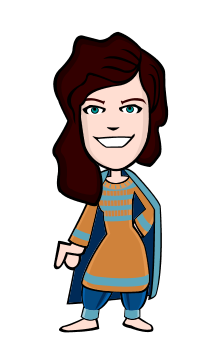