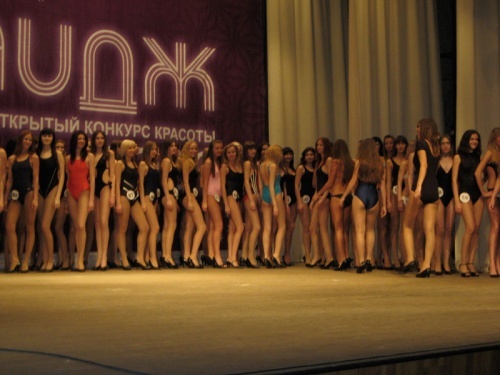 Sometimes I receive emails from girls (14 so far the youngest) looking to send photos, asking for advice, and links to modeling agencies. As Models WebTV is not an agency I
politely decline submissions and request they be careful in their pursuit of only highly reputable agencies for representation and make sure to consult with their parents for guidance.

As I'm sure to be one of many that this prospective model may be contacting, I knew
when I happened upon the documentary 'Girl Model' that it would be very important to promote to the Models WebTV community, to educate on a harsher and less glamorous reality that is the life of some of these very young prospects.

So we have just purchased our tickets to the March 20th, 2012 screening of 'Girl Model'
at IFC Center. The documentary from Directors Ashley Sabin and David Redmon follows model scout Ashley, a former model herself, as she seeks her next star in the Siberian countryside. Next they follow Nadya, Ashley's 13 year old Siberian "find" who is sent off alone to Japan in search of the career and money she believes will be hers and will support her family back home.

From the Director's: "As we enter further into this world, it more and more resembles a hall of mirrors, where appearances can’t be trusted, perception become distorted, and there is no clear way out. Will Nadya, and the other girls like her, be able to find anyone to help them navigate this maze, or will they follow a path like Ashley’s, having learned the tricks of the labyrinth but unable to escape its lure?" (Written by Kristina Aikens)

Directors' Bios
"David Redmon and Ashley Sabin's interest is in nonfiction documentary storytelling. They have produced, directed, edited, and photographed five films: Mardi Gras: Made in China (2005), Kamp Katrina (2007), Intimidad (2008), Invisible Girlfriend (2009), and most recently Girl Model (2011). Mardi Gras: Made in China was nominated for the Grand Jury Prize at the Sundance Film Festival. Kamp Katrina and Intimidad both premiered at the Museum of Modern Art and the South by Southwest Film Festival, and all of Redmon and Sabin's films have screened on domestic and international television stations. Girl Model received funding through the Sundance Institute, Cinereach, Puffin Foundation, Harvard Radcliffe Institute, and The Fledgling Fund. It will air on POV, CBC, and the BBC. Redmon received his PhD in sociology from the University at Albany, State University of New York and was recently a Radcliffe Fellow at Harvard University. Sabin received her BA in Art History from Pratt Institute".