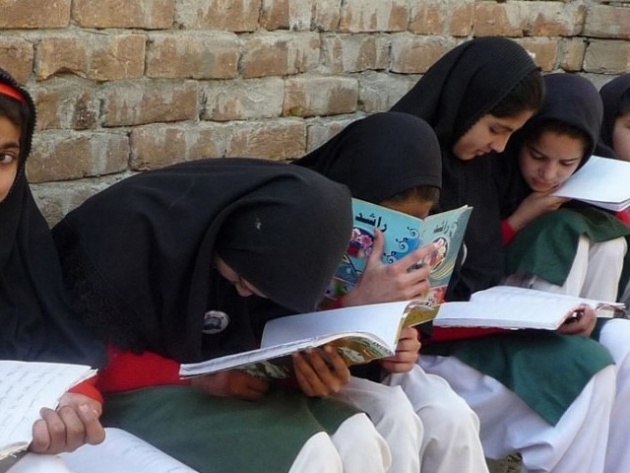 Surrounded by host of problems, ranging from economic woes to terrorism to crippling poverty and illiteracy, Pakistan has embarked on a plan to enroll every child in school- a bid to find solution of all ills in literacy.  Pakistan government launched a three- day special nationwide enrollment campaign from September 9 to 11 to register over a half million children in schools. During the campaign tens of thousands of children especially girls were enrolled in the schools.

Pakistan with second highest rate of out- of- school children is taking a number of steps to increase overall literacy rate and plugging gap between male and female education by increasing spending on education and initiating efforts to enrolling 25 million out-of-school children.

The campaign launched a day after the World Literacy Day,  will feature different activities including seminars, conferences, workshops and interactive sessions highlighting this years’ theme ‘Literacy for the 21st Century.

The campaign aims at to sensitize the parents and general masses about the importance of girl child education and reduce the drop-out rate particularly of female child by creating awareness about importance of their continuation in school. Article 25- A of the constitution of Pakistan obliges the state to provide free and compulsory education to children between the ages of 5 to 16.

However, recent report prepared by an education-focused NGO ASER Pakistan states that 23 percent of rural and 7 percent of urban children, aged between 6 to 16 years are not in schools, with girls lagging significantly behind boys in the rural areas.

The United Nations’ Development Program (UNDP) Millennium Development Goals report reveals that Pakistan will not be able to achieve its education goals until 2015.  Pakistan in view of the urgency of the problem decided to increase spending on education up to 4 percent of GDP by the year 2018.

The campaign would mainly focused Pakistan’s federally administered tribal areas (FATA) where country is fighting a home-grown insurgents, known as Pakistani Taliban who are continuing a campaign which has seen hundreds girls’ schools blown up. The Taliban are opposing to girls education and targets the schools especially those of girls’ to scare the female kids away from schools.

Pakistan’s 2012-13 Annual Statistical Report, overall literacy rate in tribal belt is around 24 percent with 36 percent for males and 10 percent for females. Overall drop-out ratio from nursery to grade-5 in government- run primary schools over a cycle of six years was 61 percent. While drop-out rate from grade six to 10 in public schools over a cycle of five years was 72 percent.

In the meantime United States announced the launch of $160 million Pakistan Reading Project to boost the reading skills of around 3.2 million Pakistani children. Under the initiative funds would be provided for improvements in reading instruction and reading assessment in grades one through five across the Pakistani public school system. The International Rescue Committee (IRC) which is partnering with regional governments and Pakistani Civil organizations will implement this project in estimated 38,000 public schools over the next five years.