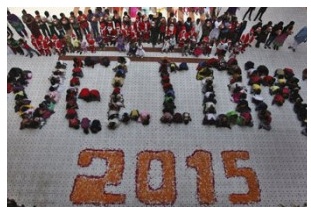 Celebrations for the start of 2015 have taken place across Asia and Europe, with firework displays in a host of major cities.

There was shock in Asia as a crush in Shanghai, China saw 35 people die marking the start of 2015.

The Gulf Arab emirate of Dubai aimed to break the world record for the largest LED-illuminated facade.

It launched its spectacular display centred on the world's tallest building.

Europe's celebrations began in Moscow with fireworks over St Basil's Cathedral and the Kremlin.

In Berlin a huge open air concert was held in front of the Brandenburg Gate, while in Paris the Champs-Elysees was closed to traffic so that pedestrians could witness a visual spectacle projected onto the Arc de Triomphe 15 minutes before the start of the new year.

The arrival of 2015 was also significant for Lithuania as it became the 19th country to join the euro currency.

In Spain, millions of revellers converged around Madrid's Puerta del Sol, while in Barcelona, London and Edinburgh huge fireworks displays or street parties were held.

Up to 1.5m people lined the shores of Sydney harbour to see the city's famous firework display.

The city's Lord Mayor, Clover Moore, said the recent hostage crisis in the city had focussed the minds of Sydney residents.

"We are celebrating that we are a multicultural, harmonious community but we will be thinking about what happened," he said.

Celebration plans were muted in Indonesia in the wake of the recent AirAsia Flight QZ8501 crash.

But across the rest of Asia there were lavish parties, with a sound and light show at Beijing's Olympic stadium and an eight-minute firework display in Hong Kong.

"I think a more peaceful year would be good for everyone," Louis Ho, 65, told AFP news agency, as the territory bade farewell to a year that saw widespread street protests.

Moscow's display led the way in Europe, with President Vladimir Putin describing the 2014 annexation of Crimea as "a historic landmark" for Russia.

Mr Putin also sent messages to several world leaders, telling US President Barack Obama that the US and Russia had a shared interest in "maintaining peace and international stability".

In Brazil, more than one million people will join the crowds on Rio de Janeiro's Copacabana beach, while New Yorkers will watch the city lower its trademark crystal ball over Times Square.

Pacific Islands just to the west of the international date line, including Samoa, Kiribati and the Chatham Islands of New Zealand, were the first places to herald the new year.