Starstruck  is one of the most popular reality talent competition show in the Philippine Television. It started on October 27, 2003 made by GMA network. This show seeks to discover new artists / stars - went through a series of auditions nationwide, and jumpstarting the career of some of the Top television and movie personalities nationwide and worldwide like Jennylyn Mercado and Megan Young.

Starstruck Season 6 started to air on September 7, 2015 and aired  for 40 minutes before 24 Oras GMA news - Mondays to Thursdays and 50 minutes  every Fridays.They decided to re-launch the show after 5 years hiatus. The winners will be determined through online votes and the average of the text plus the three members of  StarStruck Council's decision.

All over the country, they went all through different regions to make a screening for the Hopeful contestants who will compete for the next Ultimate Starstruck Survivors. In this season, age bracket is from 15-20 years of age. They were being interviewed by the panelists when they showcase their talents. Of course the audition process is long and hard because they have to look for someone from thousands of participants, who has a human interest and star quality and has an acting talent or humorous potential.

After a long period of audition, there were 35 Hopefuls selected that were given the chance to advance to the next round. They faced different stages in this round to see if they are qualified for the next round. First stage was Talent Showcase, where they can perform their talents they are most comfortable at. The Next Stage was Workshops, semi-finalists were again criticized and tested by different coaches. Ms. Gina Alajar is the Acting coach. Christian Bautista and Prof. Jai Sabas-Aracama as mentors in Singing and Douglas Nierras trained them in Dancing. Then, Screen Test is next after those workshops. And for the last challenge for Semifinal round, Director's Night, where the 35 semifinalists faced the well-known directors in industry to deliberate who's qualified for the next round.

It is the new added twist  in Season 6. To determine if they can still continue to with their StarStruck journey. All contestants should place their hands in a Hand-shaped portal and will hear one of these:

Last September 11, just to make things more exciting, the hosts announced that in this season, there will be two sets of 14 Hopefuls(28), instead of having the traditional Final 14. First set of 14 Hopefuls were "Dream 14" and the other 14 Hopefuls were "Believe 14", who were expected to be eliminated initially. Those who survived the challenges became a part of "The Ultimate Final 14".

The Male and Female Ultimate Survivors will each take home P1Million plus House and lot from Camella Homes and 5-year contract in GMA. 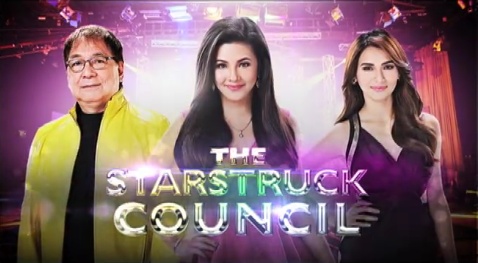 Week 4: The Immersion (On Going this week)

The Final 14 were grouped by couples to showcase their acting skills as loveteams. They make a  short romance-drama with the guest comedians from the long time running Gag Show, Bubble Gang. And these 8 couples has been challenged in performing a romantic music video directed by Guest directors, Mark A. Reyes and Louie Ignacio.

They were challenged to make a dramatic short-film this time with Director Mark Dela Cruz and veteran actress, Jaclyn Jose of MariMar to test the versatility of the StarStruck survivors. These couples has same scripts with different ending. Ms. Jaclyn Jose praised the pair of Arra San Agustin and Jay Arcilla and called them Best Pair. Another challenge for them is the acting challenge tested by  veteran director, Joel Lamangan. They were asked to introduce themselves in a creative way as instructed and depending on his direct action. And at the elimination night, Liezel Lopez was chosen as the Best Performer by the the council, acting mentors and directors for this week.

StarStruck Avenger/Eliminated for this week

The remaining survivors faced the Starstruck graduates,their challenge for this week directed by film and television director, Neal Del Rosario. Here are their group face-off:

StarStruck Avenger/Eliminated for this week

Week 4: The Immersion (On Going this week)

StarStruck Through The Years

It was premiered on October  27, 2003. Ultimate Survivors: Jennylyn Mercado and Mark Herras

It was premiered on October 11, 2004 with the StarStruck Kids. The Ultimate Survivors were  Ryza Cenon and Mike Tan.

It was premiered on December 5, 2005. The Final 4 Survivors were Marky Cielo,Jackie Rice, Gian Carlos and Iwa Moto.

StarStruck Season 4: The Next Level

It was premiered on December 4, 2006. The Ultimate Survivors were Aljur Abrenica, Jewel Mische, Kris Bernal, Mart Escudero and Prince Stefan.

It was premiered on November 15, 2009. The Ultimate Survivors were Sarah Lahbati, Enzo Pineda, Diva Montelaba, Steven Silva and Rocco Nacino.