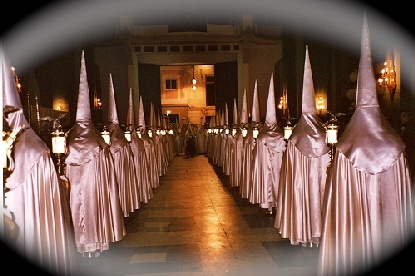 Was Rick Santorum signaling a new Spanish style Inquisition for America? Rick Santorum tried to define God (Supreme) as extending “equality” only to the extent we believe like Santorum. "Well, equality, we want equality. Where do you think this concept of equality comes from? It doesn't come from Islam. It doesn't come from the East and Eastern religions, where does it come from? It comes from the God of Abraham, Isaac and Jacob, that's where it comes from."

An Inquisition for America:
Rick Santorum’s message, even compared to historical precedent of religious persecution, was a pledge of an American Christian Right style Inquisition and the following remark was transparent for its implicit threat to all who do not share his beliefs and/or values. "Don't claim His rights, don't claim equality as that gift from God and then go around and say, 'Well, we don't have to pay attention to what God wants us to do,'" Santorum continued to the enthusiastic crowd. "'We don't have to pay attention to God's moral laws.' If your rights come from God, then you have an obligation to live responsibly in conforming with God's laws, and our founders said so, right?" According to Luke Johnson at the Huffington Post. Of course, Rick Santorum would give the opportunity for non-believers to adopt his belief system and values, before facing the penalty – but that was also the Spanish Inquisition. It was appropriate but largely irrelevant that both Luke Johnson and the Council on American-Islamic Relations ( Director Ibrahim Hooper) corrected Santorum's misrepresentation. "The Quran, Islam's revealed text, is the best refutation of Mr. Santorum's inaccurate and offensive remarks, which are unbecoming of anyone who hopes to hold our nation's highest office. Christians, Jews and Muslims all worship the same God and share religious traditions that promote justice and equality," reaffirming Islam's place as one of the Abrahamic religions.


A Campaign Against the Other:
Rick Santorum knew the facts but wanted to deepen the divide in many Americans eyes of the "us" and "them" Perhaps he wishes to demonize and prepare the turf - that it is so different that Islam/Muslims have no place in the US . The precursor to a pogrom or ethnic cleansing campaign? Of course, under this definition Hindus, Buddhists, Sikhs and adherents to other religions or no religion would also be subject to the new Inquisition. Gays and other undesirables would certainly not be excluded in his definition of “The Other.” Only around half the globe’s population belongs to the broader “Abrahamic” religions, (Christianity, Judaism and Islam). Muslims and other people who believe and further the cause of human rights and equality for all must go beyond the traditional Abrahamic construct to define commonality of our human worth and standing before the Supreme. (In fact, you do not have to worship the Supreme). Our equality is a broad grant delivered at our birth. In life, we should be judged by our deeds and in death, again we are all reconfirmed equal. (What happens after death is an opinion and not to be judged by a state's or its politixal leaders). That is by the way also the construct and vision of our American Founding Fathers and what has made this country so great and principled in its foundation – not differentiating citizens by subjective notions of religion or values. By Ambassador Muhamed Sacirbey Facebook Become a Fan at “Diplomatically Incorrect” Twitter – Follow at DiplomaticallyX FOLLOW mo @MuhamedSacirbey