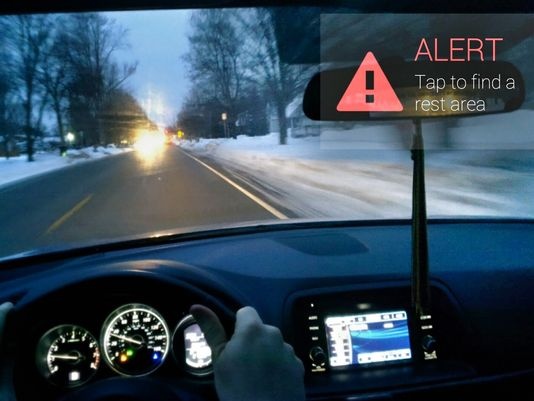 DriveSafe is an app for Google Glass that alerts drivers visually and audibly when they are getting drowsy.(Photo: Courtesy of DriveSafe)

SAN FRANCISCO — Walk around this tech capital and you'll spot someone wearing Google Glass, a device that spawns everything from envy to eye-rolling as debates rage over the wearable computer's pros (hands-free tool) and cons (distracting privacy invader).

But don't smirk too fast: One of those early adopters could wind up saving your life. Around the country, coding-capable fans of the device are quietly taking it upon themselves to leverage Glass's futuristic properties for good.

In Michigan, a programmer is developing software that allows Glass to monitor a driver's eyes and send visual and auditory alerts at signs of drowsiness. In North Carolina, a fireman has spent his own time and money to develop an app that routes incoming 911 calls and the locations of fire hydrants to his Glass. And in Texas, a health-care entrepreneur is working with anesthesiologists to make their rounds safer and more efficient.

"Things are getting interesting," says Thad Starner, Google's technical lead on Glass, which is expected to go on sale commercially this year. It's now in the hands of tens of thousands of folks who purchased the $1,500 device after writing a successful pitch to Google.

"There are enough devices out there that we're beginning to see things we didn't expect," says Starner, a longtime augmented reality expert at Georgia Tech. "People are figuring out how to use Glass to solve problems that interest them."

Often those problems aren't critical. Some of the apps produced so far target popular pastimes, such as cooking (AllTheCooks Recipes places that info in your peripheral vision), golf (GolfSight projects hole distances and other details) and fitness (Strava's Glass app lets weekend warriors monitor their progress while working out).

But Jake Steinerman is adamant that Glass' uses should go beyond mere entertainment. When the New York native wound up in Michigan for college, he went from being a non-driver to exploring the back roads of his adopted state, "often driving so much that I found I would get dangerously drowsy," he says.

Steinerman, 23, of Midland, Mich., felt strongly that Glass was not only less distracting than his smartphone but that it could potentially help drivers. DriveSafe for Glass, which launched in January and is free for Glass owners, uses built-in infrared and tilt sensors to detect when the head or eyelids drop and triggers a voice alert ("You're falling asleep, pull over") and a visual message that directs the wearer to tap Glass for directions to the nearest rest area.

"The idea is to help combat distracted driving of any kind," Steinerman says. He says he's considering adding a gaming component to the app, which would reward safe driving with points "depending on where your head is focused. There's a lot of negative talk about Glass being distracting, but I find it safer than using a phone."

In North Carolina, firefighter Patrick Jackson, 34, has created another innovative and altruistic use for Glass. 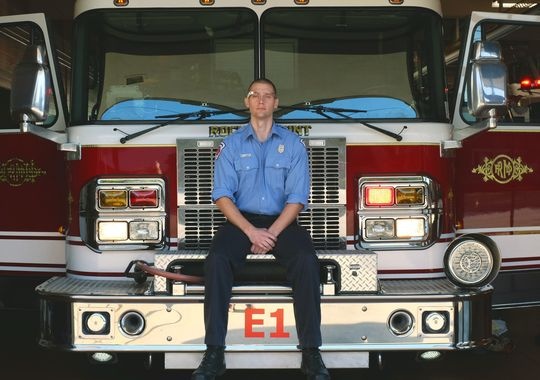 Patrick Jackson, a firefighter from North Carolina, has designed an app for Google Glass that projects the location of fire hydrants.(Photo: Courtesy of Patrick Jackson)

"Time is critical in what we do," says Jackson, who fights fires for the city of Rocky Mount, N.C. "What I've developed is a work in progress, but I'm convinced it is something that will be very useful."

Jackson has spent nights and days off programming an app that brings key information to his heads-up display, including turn-by-turn directions, hydrant locations, and soon even building blueprints and car diagrams that indicate the most effective way to use hydraulic rescue tools to free a trapped motorist.

"For years, firemen had to try and memorize all these things, or just learn them on the fly," says Jackson, who also has a part-time job coding remotely for a Michigan company, Team (EverMed), which is working on a Glass app that provides real time CPR guidance.

There are few professions where safety matters more than medicine, and when Glass was first announced in 2012, Kyle Samani's "eyes lit up," he says. "I thought 'a hands-free computer, there has to be a way to use that in health care.'"

Samani, 23, of Austin, Texas, had already worked for an electronic medical records company for a few years before rounding up investors for his idea to make a Glass app that shared patient information between doctors within a given hospital.

"Everyone needs help, whether it's the patient or ER docs doing triage," Samani says. His Pristine EyeSight is compliant with HIPAA, the federal patient privacy act. "Any video streams (of patient care from a doctor's Glass) are encrypted until they're rendered on download. It's a novel form of telemedicine."

Samani's prototype invention has been tested by Leslie Garson, associate clinical professor of anesthesiology at the University of California at Irvine. He says using EyeSight is like leaping out of the Stone Age.

"Believe it or not, we still walk around with pagers, and if a resident anesthesiologist needs my help that thing buzzes, I walk to a phone, ask to speak to the resident, who tells me I need to come to his operating room, and sometimes when I arrive the question has been answered," Garson says.

Instead, EyeSight offers "a remote pair of eyes and eyes into that other room," he says. "With a tap of his Glass, it alerts my pair that something is up, and I can immediately look at what he's looking at and determine what to do."

Garson adds that Pristine is working on having Glass help with "critical events," such as an air embolism or hemorrhage, "which require specific procedures but are so uncommon that we wind up going to manuals, which is slow. With EyeSight, you'd just say 'Critical Event' and 'Cardiac Arrest' and you'd be told what to do."

More such Glass innovations are likely to follow, says Henry Lowood, curator of the History of Science and Technology Collection at Stanford University.

"We're increasingly encountering tech inventions that are open and flexible," he says, noting that Google has facilitated Glass inventions by users via GDK, its Android-based Glass Development Kit.

Lowood notes that in the '90s, a Marine sergeant who also was a fan of the video game Doom wound up building a training simulator, Marine Doom, for the military, while in the 2000s a group of students created an orchestra for smartphones dubbed the Stanford iPhone Orchestra.

"We no longer buy technologies and use them as intended," he says. "We expect them to do more, and we're empowered to see that that happens."

Things to know before creating a business mobile application