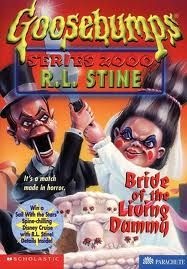 Front Tagline: It's a match made in horror.

Brief Synopsis:
As this second shot at 2000 scares opens, Jillian has her hands full with her pet lizard Petey, her little twin sisters Katie and Amanda, their life-size doll Mary-Ellen, and her best friend Harrison. No more proper nouns pls. It goes without saying that the twin sisters are obnoxious and the best friend is complacent, and yet here I've just said it anyways.

In a very strange plot point, Jillian wants to grow up to be a clown, so she volunteers to take her sisters to the Little Theater, a kids' puppet show. The idea is that she'll learn how to entertain kids but a clown has never been entertaining so I hope she brings a book to read. Harrison agrees to accompany them, as he thinks it sounds "cool." It's revealed that five years prior, Jillian made her rather large friend Harrison eat "a bowl of mud," so let's chalk his enthusiasm up to the lingering effects of that thing that never happened and could not ever happen. Mary-Ellen the doll, who resembles Raggedy-Ann not the Bride of Frankenstein (Sorry cover artist), also comes to the show because of course it does.

Entertainer Jimmy O'James comes on stage with his "good pal" Slappy the dummy. Jillian is shocked that the ventriloquist is only a teenage boy. Jimmy tries to do a straight act, but of course Slappy has other plans. The doll brutally compares Jimmy's face to vomit, wrinkled money, and a summer's day.

Katie and Amanda get called on stage to be insulted by Slappy with closer proximity. The girls are called assorted names and Slappy even insults their doll. The twins are so angry at their treatment that they decide to tell Slappy how mean he was after the show. Boy, these two better keep away from a Rickles show. Actually, that's good advice for anyone.

Jillian tries to stop the six year olds from running backstage to confront a doll, but if you've been to a Rolling Stone concert, you know that young girls are the first waved inside, and ventriloquist shows are no different. The two older kids run after them, but the bulky Harrison does his best Eric Campbell impression, and he and Jillian get stuck in a doorway. Oh man, you wouldn't think physical comedy would translate into book form, and you'd totally be right.

Jillian and Harrison split up in the search for her sisters. Jillian beats the twins to the ventriloquist and arrives just in time to see Slappy bloody Jimmy's nose. Wait, but Jimmy's not a woman. Ghostwriter Alert. Jimmy explains that in fact Slappy isn't alive and what Jillian saw was just him practicing his new routine. Jillian believes this because if she didn't, the book would be over.

Jillian finds the twins but loses Harrison, but figures two out of three ain't bad. The twins make her take them to Dairy Queen and she's forced to buy the doll ice cream. When they get home, Slappy's waiting on the couch. Harrison explains that he met some friends he knew working backstage and they let him go out into the alley behind the stage and dig in the trash. Man, lucky! Inside a trash can was Slappy. Harrison figured Jillian would love some trash so he brought the doll along. Almost immediately, Slappybites Jillian's hand. Oh my God, is this the one where it turns out Slappy is actually a dog or something?

Harrison leaves the broken dummy with Jillian so her dad, an aspiring carpenter, can fix it. At dinner, the twins won't pass the salt and this is simply the last straw for Jillian, who storms away from the dinner table to plot her revenge. She comes up with a plan of revenge that's about as diabolical as a hug: She'll tie the twins' shoelaces together! Evan Ross, meet your new girlfriend.

Before Jillian can execute her Machiavellian scheme, Slappy comes to life and tells her to go to bed. But it's actually the twins making Slappy talk. This further enrages Jillian and she calls off the shoe-tying revenge in favor of an even worse revenge. The next day at school, Harrison helps her brainstorm revenge plans. She contemplates smearing their doll with cheese and letting rats feast on it. I don't think that's a very good revenge, unless she ties the rats' shoelaces together afterwards.

After school, Harrison and Jillian visit the local magic shoppe to pick up some funny tricks for their clown act. Clowns, magic tricks, ventriloquist dummies-- how did this series fail when Stine included everything children in 1998 loved? As they walk into the store, Jillian spies Jimmy the ventriloquist exiting. He warns her to get rid of Slappy, then disappears. A very appropriate action based on the locale, really.

Jillian and Harrison perform their clown act for a four-year-old's birthday party. Only it goes horribly wrong and somehow becomes even worse than a clown act normally is. They make the kids cry instead of laugh. For a finale, they shoot soap into a four-year-old boy's eyes, painfully blinding him. Abracalawsuit.

Somehow the two blame their inept clown act on the twins and so once more revenge is contemplated. Before they can follow that train of thought, a newer, dumber car comes on the tracks: Harrison proposes they do a ventriloquist act for the kids using Slappy. This is the fifth Slappy book I've read so far and I've pretty much exhausted my alloted suspension of disbelief. So let me put it bluntly:

When Jillian gets home, her mother asks how her clown party went and she replies, hand to God, "Don't even go there." Harrison wants to get a doll of his own, so he gets the address of Jimmy and the two children race to the house of the boy who plays with dolls. The teenage ventriloquist lives on the wrong side of the tracks. To help visualize this metaphor, RL Stine has Jillian and Harrison cross over a set of train tracks. "Hello, Pulitzer?"

In what is I believe a first, Goosebumps readers are exposed to a trailer park and poor people. It is of course given the ominous airs that such a wretched locale deserves. I'm sure all of Stine's low-income readers appreciated their portrayal, but unfortunately he can't hear their comments from high atop his stack of money.

The kids finally arrive at the ventriloquist's abandoned house. They naturally invite themselves in and start rifling through the belongings he left behind. Jillian finds a diary and thus the reader finally learns the secret origins of Slappy. An evil sorcerer created evil toys to steal the possessions of children while they slept. He made Slappy out of a coffin and the sorcerer then possessed the dummy body. Jimmy goes on about reciting the magic words to bring Slappy alive and how one time a girl at 7-11 smiled at him.

When Jillian gets home, someone has written "Where is my bride?" in lipstick on her mirror. The twins shriek in terror at finding Slappy sitting in a pile of spaghetti in the dining room, and they insist Slappy is responsible for the horror. Jillian assumes the twins read the magic words and brought the dummy to life.

Because of the diary and pasta, Jillian refuses to use Slappy in their ventriloquist act. They instead practice with Mary-Ellen and a spare dummy Harrison found in his uncle's attic. I called my uncles to see if they had a spare dummy in their attic and they all said no. Hollywood

Okay gang, you better take off your shoes because I'm about to blow your socks off. In a stunning finale that encapsulates everything I hate in these books and more, another kid's birthday party arrives. Jillian and Harrison plan to do the above-mentioned ventriloquist act. Due to plot convenience, the party will be taking place in Jillian's basement and without adult supervision. Jillian goes to grab Harrison's doll but finds Slappy has taken his place. Ominous.

The party starts off well, with some humorous battle of the sexes bickering between Slappy and Mary-Ellen. Then Slappy vomits all over a kid. This is met with a similar response by the audience:

I saw two boys bent over, vomiting on the floor.

Slappy grabs the birthday boy by the neck and drags him across the room, threatening to kill everyone unless he's given his bride. Jillian fetches Mary-Ellen and Slappy reacts in disgust, informing her that he meantJillian. Now it's my turn to react in disgust. Child brides. Add that to the list and then burn it.

Jillian refuses and then Slappy punches her in the head. RL Stine Alert. Slappy justifies this by telling her it was only "a love tap." Holy shit, you guys.

Jillian tries to run away but she slips and falls into the puddle of vomit. Mary-Ellen comes to life and tells Slappy that she didn't bring him to life to marry Jillian, she brought him to life to marry her. Mary-Ellen is thus shocked that he's so resistant to her. She probably figured all she needed to do to keep her marriage successful was keep Sienna Miller away. Unfortunately, Slappy calls Mary-Ellen ugly and punches her out.

Slappy insists that the birthday party is now a wedding party and he wants his bride, Jillian. Mary-Ellen comes to life again and she and Slappy wrestle in his vomit. Boy, is this doll's vomit irresistible or what? Slappy leads the fight into Jillian's dad's workshop, where he swiftly slices Mary-Ellen in half with a table saw. But Mary-Ellen won't let go of Slappy's hand, so he too goes through the table saw. Finally, the end of Slappy. Oh wait

But the Twist is:
Jillian continues reading the ventriloquist's diary and learns that even though the evil doll may die, the soul of the sorcerer can still pass on to other people. Jillian tells Harrison to check out her awesome revenge against the twins. She then vomits on her sisters.

the Platonic Boy-Girl Relationship:
Jillian and her best friend Harrison, who disappoints an audience with half-hearted clownery halfway through the book.

the Violent Doll-Girl Relationship:
Jillian and Slappy, who does his best Jerry Lee Lewis impression for much of the novel.

Questionable Parenting:
"Well, you did blind a child with your clown act. But I guess your ventriloquism act can't possibly go wrong. You're hired!"

R.L. Stine Shows He's Down With the Kids:
If there's one thing kids love reading about, it's marriage.

Please Don't Praise the Dummy Alert:
"That dummy has a baaad attitude!"

Out of Context Text Alert:
"We'll do an all-squirting act."

Memorable Cliffhanger Chapter Ending:
Ch. 1/2:
Someone has slit Jillian's throat! Wait, no, it's just the twins getting ready to cut her hair. This is why I scream in terror every time I pass a Supercuts.