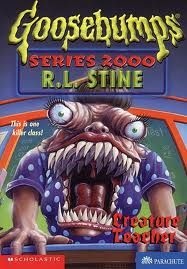 Front Tagline: This is one killer class!

Brief Synopsis:
In the days before Ashton Kutcher made punk'ding socially acceptable, children like protagonist Paul were punished for their childish antics. See, Paul taught his pet parrot how to say "Don't do your work, the teacher is a jerk," which is not even clever for a parrot. This alone isn't enough to get him expelled, but on the way to the principal's office, he accidentally trips his jerk teacher and she gets hurt. See, hurtful words will never compare to actual physical harm. This is why bullies model themselves on Oscar de la Hoya, not Wilde.

So Paul gets himself sent to a boarding academy for overachievers, The Caring Academy. Paul isn't an overachiever but his dad pulls some strings and gets him accepted. Because expensive private schools often accept students who will lower their average testing scores. Paul's new roommate Brad is a violinist practicing for one of the strativarious acts at the upcoming school-wide talent show. Paul is warned to get a talent before the big show. Unfortunately, stumbling over teachers and sending them to the hospital is hard to translate to the variety show format.

Paul's parents leave and he meets up with two girls, Celeste and Molly, who warn him to leave as soon as he can. Paul thinks it's a big joke and starts clowning around before class starts. Unfortunately, he learns the hard way that he's not funny when a giant grotesque monster enters the room and licks his arm with her enormous cow tongue. The lessons in these books are so easily translatable to the everyday situations kids face.

See, though several kids warned him that the teacher was a monster, Paul took the literal figuratively. Turns out Paul's teacher Mrs. Maaargh reallyis a giant monster. God, with a name like that, who knew? She's given plenty of disgusting physical traits, like lumpy wet bloated feet with black claws on the toes, and her skin is yellow like "chickens in the supermarket." Insert jaundice/the Simpsons/fake tan/questionable Asian joke here.

Mrs. Maaargh and her students explain how she's a big booster on Darwinism and survival of the fittest. So the hideous monster is in favor of evolution? If the right thinks the left is full of nothing but baby killers, Stine takes ludicrous political allegory to the extreme by having Mrs. Maaargh expressly promise to eat the worst-performing student in her class. There's a bunch of index cards with the name of every student and Mrs. Maaargh moves them around as she sees fit. Paul notices that his new friend Molly is one away from the bottom.

In the lunch line, Molly and Celeste tell Paul that he can get ahead by working on extra credit projects and performing well in the talent show. In the dining hall, there aren't three seats open so Paul sits away from his new friends and across from a lonely-looking chubby kid. He makes small talk with the kid, Marv. He learns that the other teachers are normal and only his is the monster. Paul wastes no time in bitching about his teacher to Marv, only to be dragged away from the table by Celeste and Molly, who inform him that Marv is Mrs. Maaargh's son. Paul decides that the best plan of action is to get to Mrs. Maaargh before her son can and do damage control. He runs to find the teacher and interrupts her snack of crackers and mice. Great.

Molly and Celeste brainstorm ideas with Paul on what his talent can be. Paul wants to be a stand-up comedian and tell jokes, but the girls warn him that she's never laughed at anything and he'd better do something spectacular to dazzle her. Spectacular like doing balloon animals while performing stand-up! That is his actual solution. Marv shows up in Paul and Brad's room and offers them some dessert, but Paul rudely rejects the treat as he suspects the boy is only trying to fatten him up for his mother.

Several days later at the talent show audition, Paul's roommate Brad gets sabotaged when someone pours "pure skunk scent" from the science lab into his violin case, causing a noxious odor to fill the rehearsal hall when he tries to play his instrument. Mrs. Maaargh heads over to the science lab and retrieves a bottle of the skunk scent and drinks it for no reason than to elicit a cheap "Ew that's gross" from the reader. Since Molly and Brad were both competing to play violin in the talent show, Mrs. Maaargh disqualifies Brad and allows Molly to stay in the show. Paul has the misfortune of trying to make people laugh after all the commotion, and he's shocked to discover someone has poked holes in all the balloons, ruining his act. Paul immediately suspects his manipulative far-sighted girlfriend.

Back in his room, Paul discovers a block of Marv's fudge next to the rest of his pricked balloons and Brad's ruined violin case. He suspects Marv of the treachery and though it's not expressly revealed, he probably expressed his frustration by yelling out "Oh fudge."

After school, Celeste and Molly are working on some sort of model using Nerf balls and sticks. When pressed, they admit they're working on a model of the galaxy. Um, they might need a few more balls. The girls suggest Paul get in good with Mrs. Maaargh by doing a molecular model of the most complex molecule in existence. The molecule is not named in the book, because that would have required five minutes to pull a book of a shelf, and five minutes in RL Stine time is three chapters written. Paul decides that extra credit could only help, given that he accidentally stepped on Mrs. Maaargh's foot and severed one of her clawed toes, which she then ate. I really can't imagine why this series failed.

To the surprise of exactly no one, when Paul presents Mrs. Maaargh the model he spent several countless nights constructing, he discovers that someone has sabotaged it to simply form the words 'YOU UGLY.' Paul, who ain't got no alibi, backpedals and insists someone is out to sabotage him. Mrs. Maaargh chastises him on his improper grammar and moves his card down off the chart and onto the floor.

Taking a page from, oh, I don't know, every book Stine's ever written about camp, the phones don't work at the school and none of the outgoing mail ever gets deilvered. So Paul decides he'll escape, even though Molly tells him that it's impossible to escape the grounds. See, on her second day at the academy, after she discovered her teacher was a monster, Molly tried to escape, but was caught and that's how her name ended up so low on Mrs. Maaargh's list. Before Paul can escape though, his parents show up at the school.

Mrs. Maaargh has invited Paul's parents to feed them a story about how their son tried to run away, revealing that the woods surrounding the academy as so dense that were he to run away "again," he'd be lost forever. Paul realizes she's just covering for his disappearance once she eats him. So, just like any other parent-teacher conference. Paul begs and pleads with his parents to take him with them, but they refuse.

Finally the day of the big talent show arrived. During lunch, Paul is handed a note from the office and told he is to report to the auditorium immediately. While he waits in the spotlight to go on in the eerily empty concert hall, Molly shows up and informs him that the talent show was canceled, meaning Paul's still on the bottom and was only called to the auditorium to be Mrs. Maaargh's luuunch.

Mrs. Maaargh lowers Paul down under the stage using the trapdoor and prepares to eat him. Molly causes a distraction and attempts to save Paul's life. It turns out Molly, not Marv, was the one who sabotaged all the projects, so she could get moved off the bottom of the chart. But she feels awfully sorry and attempts to hoist Paul up on the elevator to the top. Unfortunately, Mrs. Maaargh pulls him back down and only Molly escapes. Paul wriggles free and runs for help, only to bump into Marv.

Mrs. Maaargh's son reveals that he considers Paul a friend, since he's the only one who ever talked to him. So like all good friends, he gives advice on how not to be eaten by his mother. If Paul can make his teacher laugh, she'll fall into a coma and hibernate for six months. Well of course. Paul realizes his jokes won't do the trick (It's hard to type out a sarcastic "No!" but if you can imagine one here, that would be swell) so he drops to the ground and starts tickling the monster's wet clawed toes until she falls into a deep sleep. 2000 times the scares!

But the Twist is:
Marv tells Paul he's hungry.

the Platonic Boy-Girl Relationship:
Paul and his new friend Molly, who disappears up an elevator 7/8ths of the way through the novel.

Questionable Parenting:
Paul's dad admits that his teacher looks like a monster, but insists that beauty is only scaly skin deep.

Questionable Teaching:
Mrs. Maaargh's lesson for her class of gifted students, who are so smart and talented that they're sent to an advanced-placement boarding school, is to just write a sentence on the board and have one of her pupils identify the subject and the verb.

Less is Lorrie Moore Alert:
The book opens with a second-person prologue for no reason whatsoever. Because you enjoy reading things written in second-person.

Teacher drags student by his feet

So, I work in schools. Ive worked in schools for a good 7 yrs now. The one thing we have engrained i…

Semester is almost over! It was a crazy journey but it I enjoyed it a lot. I was able to experience …