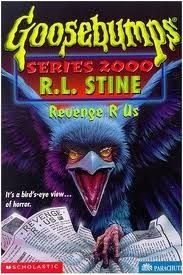 Front Tagline: It's a bird's-eye view... of horror.

Brief Synopsis:
For those who enjoyed last week's entry (or those of you who just skimmed all six-thousand words of it looking for jokes), I've got good news and bad news. The good news is that much like I Am Your Evil Twin,Revenge R Us is another Goosebumps mixtape, constructed almost wholly from other books in the series. The bad news is that despite borrowing, oh, the entire plot of Be Careful What You Wish For...., the book also cribs heavily from, dear God in heaven, Chicken Chicken. So the bar is set pretty high and pretty low.

Narrator Wade Brill is getting ready for a friend's birthday party. Wade's supposed to catch a ride to the party with her 17-year-old brother, Micah, but he still hasn't returned from the gym to pick her up. This isn't the first time Micah's been a bad brother though. For instance, there was the time he interrupted her and her friends by trotting around with Wade's underwear on his head. What. And here's the part that makes even less sense: She's the one who felt embarrassed by this.

As the hour grows late, Wade decides he must have forgotten his (non-bench) pressing engagement. Braving a violent rainstorm outside, Wade wades through water and loses her umbrella on her journey to meet her brother at his gym. Luckily, en route, he pulls up next to her before she has to walk too far. Unluckily, he purposely hits a puddle in the process, spraying her and her soaked white sundress with mud. He then helpfully drops her off at the bottom of her friend's driveway and speeds away without so much as an apology. This will be the nicest thing he does in the novel.

While drying off in her friend's bathroom, she notices a newspaper ad that will solve all of her problems. It's for writing lessons and she mails the clipping to RL Stine c/o Scholastic. But seriously folks, it's for a revenge business called Revenge R Us. Yes, that's right, for those of you who sawDirty Work and thought it would make an excellent Goosebumps book, you were wrong.

Wade doesn't want to visit Revenge R Us without an escort though, so she spins her wheels for a few days until her friend Carl Jeffers is available to accompany her. In the meantime, her brother's behavior becomes a little less than charming. Micah steals her diary and reads it over the loudspeaker at a public pool. Wade's shocked because though Micah was always sneaking around her room to find her diary, she hid it in a really good place: under her mattress. I don't know what's worse, that she thought that was a good hiding place or that it took her brother a couple months of snooping to find it.

Before her official revenge against Micah, Wade attempts a pretty horrendous amateur revenge. While her brother is entertaining his girlfriend, she slips a dead garden slug into his coffee. This is followed by her mother accidentally drinking from the slug mug. If that wasn't gross enough, her mother spits the slug out and it slides down her face, sticking there. Classy as always, RL Stine.

Finally the day arrives for Wade and Carl to take a trip down to Revenge R Us, which is located in a trailer park in "the wrong part of town." With his finger on the pulse of those income brackets which preclude yachts, RL Stine appears to have confused mobile homes with gypsy hovels. The description given to the lower classes in the trailer park is so removed from any current reality that I kept expecting the Joads to emerge from behind a tent flap.

Once the kids arrive at Revenge R Us, they meet the proprietor, a gypsy named Iris. Iris is pretty excited about finally getting some customers, as her business is a new startup, but she's less thrilled when Wade explains she has no money. Proving her business model is probably not a good one, Iris offers to let Wade have a free preview of her revenge services, with the warning that they are magical. Wade thinks it's a fine idea and pets Iris' magic crow, Maggie, three times while the gypsy witch casts an itching spell on Micah.

Oh but wouldn't you know it, Iris is still working out a few kinks in her new business. The first revenge spell for Micah to have horrible itching somehow gets transferred to Wade, who itches so horribly that she begins scratching herself until she bleeds. Oh but Iris reverses that spell and then casts one that will cause Micah's hair to fall out during his big date. Except oops, that spell also gets transferred to Wade, only reversed so that she grows hair. Great, this is the one where it turns out they're stealing part of that one where it turns out they're all dogs or something. After Wade grows so much hair that she gets weighted down and can't move, Iris reverses her second failed revenge spell and then casts a third and final spell against Micah. I know you get what you pay for, but at this point wouldn't it be a lot easier for Wade to just wait around a corner and yell "Boo!" at Micah? It's not like she could turn into a ghost or something if it backfired. But no, more magical crow petting ensues.

Iris' third revenge spell erases Micah entirely. For some unknown reason, Wade really wants her brother back, even though he is without exaggeration the most psychotic character ever to appear in one of these books. His actions aren't obnoxious, they're abusive. One scene finds him just shoving his sister into a bathtub as hard as he can with no provokation. But because there'd be no forward momentum without her doing so, she goes to Iris and begs for her to bring Micah back. Unfortunately, Iris is sick of giving away free ineffectual revenges that are horrible, and this reversal will cost Wade.

What's the price? Apparently Maggie the magic crow has a sister named Minnie being held captive by Iris' evil sister in a house on Wade's street. If Wade can go into the house and rescue Minnie, Iris will use the collective power of the two magical birds to bring her brother back to life. Let's all pause and marvel at what I had to write just now.

Wade breaks into the witch's house and steals the magic crow, only to be stopped by the familiar-looking hag. Why, it's Micah dressed in drag! Oh Christ me. Micah smirks and explains that the entire book was an elaborate revenge against Wade. I don't think "revenge" means what he thinks it means because she didn't really do anything. Nevertheless, Micah spent $300 procuring Iris' services after he saw the ad clipping in Wade's room. The entire thing was set up to ruin Wade's life for no reason. Even the second magic crow was just a regular crow. Thats the last straw for Wade and she vows more revenge. Great, because the last 100 pages have been pretty good, but what the book really needed wasmore revenge.

Wade steals Maggie and casts a spell on Micah that causes him to do back flips. Micah warns that she probably shouldn't have stolen the gypsy's magic bird, but Wade explains that the hag doesn't have their address. She then cuts the debate short by turning him into a slug. Then that gets boring so she turns him into a frog. Things turning into other things, there's a novel twist for these books. Unfortunately Iris shows up anyways, having gotten their address from the check Micah wrote her. Iris must be really new at running a business if she accepted a check from a teenager.

Wade refuses to give the bird back and instead casts a frog-tuning spell on the witch using Maggie. Only Iris doesn't transform. She explains that magic birds have rules and Wade just broke one. Apparently you can only use a magic bird for three spells in a day. On the fourth spell, the revenge you wish is cast back on the spellcaster. Wade turns into a frog.

But the Twist is:
This didn't end the series.

the Platonic Boy-Girl Relationship:
Wade Brill and her friend Carl Jeffers, who disappeared halfway thru this entry's summary because he was boring and didn't really do anything.

Questionable Parenting:
When Micah runs over Wade's bike with his car, their father just chuckles. Aren't the odds pretty good he's the one who paid for the bike though?

I had no idea that I was minutes away from the worst day of my life.
And maybe the best....

You guys read this entry, was there ever a moment that was the best of anything for Wade?

Great Prose Alert:
How's that for a Kodak moment? A boy I like sitting there with my underpants in his hands!

Conclusions:
Writing this entry was like discussing the ingredients label on a cereal box. I can tell you what's in it, but there's not much I can do to make it interesting.