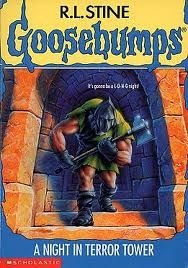 Front Tagline: It's gonna be a L-O-N-G night!
Back Tagline: All Locked Up And No Place To Go!

Official Book Description:
Sue and her brother, Eddie, are visiting London when they run into a little problem. They can't find their tour group. Still, there's no reason to panic. No way their tour guide would just leave them. All alone. In a gloomy old prison tower.
No way they'd get locked inside. After dark. With those eerie sounds. And a strange dark figure who wants them...dead.

Brief Synopsis:
When Woody Allen set Match Point in London, he inspired critical praise for moving beyond his comfort zone. No such accolades awaited the author of Goosebumps ten years prior though, as RL Stine remains an Alexa Chung in a Louis Theroux world.

Sue and her younger brother Eddie are American tourists in London. They've spent an average day in London, eating bangers, riding in double-decker buses, and visiting old buildings. This was written before Skins, so these kids didn't bother to do anything fun during their unsupervised jaunt around town. As the story opens, Sue and Eddie are touring the infamous ominous Terror Tower. Sue didn't want to go but Eddie begged her. Being a good sister, she does take the opportunity to tease him about his tendency to get scared a lot, especially at movies. Hey Eddie, if you don't want to get scared, I've got just the movie for you:

Inside the castle, the guide leads the tourists around the various rooms, showing them empty jail cells and torture chambers. The guide spends a good amount of time introducing the various tools of torture, such as the rack, thumbscrews, and a paperback copy of Watchers. Sue's first reaction to such horrific sights is to take a picture, but she can't find her disposable camera. Her brother produces it from his bag and it's revealed that Eddie is a gifted pickpocket. Oh now I think I remember the twist ending of this one: spiritual transfiguration.

During the tour, Sue spies a man in black following their every move through the castle. Yet she never stops to tell him "Wrong tower book," so he maintains his watch over her and her brother. The tour guide leads the group into a small barred cell and tells them the tragic story of Prince Edward and Princess Susannah of York (You gotta be kidding me-- for more than one reason), two preteens who were sentenced to death by the King. Sue tries to listen to the story but gets distracted by Eddie breaking her camera and misses the end. Well, it probably wasn't important.

Once Sue and Eddie stop bickering about the camera, they realize that the tour has left them behind. They walk out into the steep narrow stairwell and can't hear or see anything-- anything except the man in black. But instead of regaling the youngsters with gravel-voiced country rock, the man attempts to capture the children. The siblings still aren't quite sure what's going on, but the guy is wearing a cape. Even in Goosebumpsbooks, common sense dictates that if a guy in a cape tries to capture you, you run in the opposite direction.

An extended chase down tunnels and sewers follows. Inside the sewer, a wave of rats move in on the humans, because when you're already cribbing from a few Stephen King books, what's one more? The two kids think quick and grab onto the metal rings descending from the ceiling, lifting their bodies up out of the rats. Kids learn practical life lessons in these books: If you're ever pursued by a strange man, run into a sewer and conjure a rat-wave.

Once the rat-tide subsides, the kids lower themselves down and escape out into the parking lot. They discover that their tour bus left without them, but luckily the trusty night guard tells them in a thick Scottish brogue where to call for a cab. Cross your fingers that the kids stop at a pub so we can get an Irish accent as well, as in London, every European accent abounds!

The cab delivers them to their hotel, where they're sure their parents, who came to London on business, are bound to be back. When the kids try to use the money their parents gave them, they discover it worthless. And they don't have two forms of ID, so writing a check is out too. The cab driver agrees to wait while they run up to their room for the money. Inside their hotel room however, they discover the suite to be empty, with no record of any family having registered. Also, when questioned by the concierge, the kids can't remember their last name. Most troubling of all, these characters will take like 90 pages to figure out what became startlingly obvious to anyone reading the book the moment the tour entered that final room.

The kids dine and dash in the hotel restaurant, fleeing to stiff the cabbie as well. Running through the kitchen corridors, the man in black blocks their path. He accosts Eddie and forces him to give up the three white stones he apparently lifted from the man in black earlier. Eddie does so and the man in black uses the stones to bring the kids back in time. Yet Sue and Eddie don't realize they've gone back in time and are convinced that the medieval-looking grogshop they've wandered into is an elaborate costume party. Running out of the abbey, Sue loses Eddie but finds common sense which reveals to her that she's no longer in the twentieth century. The man in black pops up again and there's another chase. You know what has never translated well into these summaries? Action sequences.

Sue pays a peasant for a hiding space with the funny money and is shocked to discover that it's actually real gold coins. I guess Pier 1's been around a while because the peasant hides her in a wicker basket. When the man in black strolls around, the peasant wastes no time turning Sue in. The man in black commands some soldiers to lift the basket into his cart. The peasant apologizes to the basket for turning the girl in, but she just couldn't go against the man in black-- after all, he's the Lord High Executioner!

Refusing to defer defer to the Lord High Executioner, Sue is escorted back to the castle, where Sue is reunited with Eddie. The two are locked in a cell, but not before the pale man in black taunts them with his white balls. Once the dignified and potent officer, whose functions are particularly vital leaves, a sorcerer appears. I don't care if already made the list, add 'sorcerer' to the list.

The white-bearded sorcerer introduces himself as Morgred, the king'spersonal magician. He then shocks exactly two people with the following proclamation: Sue and Eddie are actually Susannah and Edward. No. Way. Their parents are dead and their uncle, the King, has imprisoned them to await their death. Morgred used the magic stone balls to send the two kids as far into the future as possible and gave them false memories.

The kids try to make a break for it out the open cell door, but Morgred bewitches the children and they freeze in place. He apologizes with tears in his eyes, but if he lets the children escape, the King will kill him. If the sorcerer dies, his argument goes, who will perform magic for the kingdom? Eh, I bet they could find someone to do magic. I mean, I doubt the Amazing Johnathan still has a job. As this blubberin' Merlin keeps wailing, Eddie reveals to Sue that he's swiped the stones again. Remembering the ancient latin words Morgred used to cast the spell (Schlemiel! Schlimazel! Hasenpfeffer Incorporated!), the two cast themselves back into the present.

Back on the tour, they finally hear the rest of their story: on the night of the execution, the children mysteriously disappeared. A bearded man joins the children and thanks them for bringing him with them. Morgred asks for the children to call him Mr. Morgan and offers to cast a Food Spell to cure their hunger. The book ends as Eddie wittily replies that they don't need spells when there's fast food restaurants! I could quote the final exchange, which is worse than you'd suspect, but if I did I might accidentally cast a Stupid Spell and the blog would go back in time.

the Platonic Boy-Girl Relationship:
Eddie and his sister Sue, who disappears into a basket two-thirds of the way through the book.

Questionable Wizarding:
Morgred has no problem abandoning all the people in the land who counted on his wizardry so long as he gets to eat burgers in the future.

Appropriate Anagram of the Title Alert:
A Nitwit Regent Horror

Memorable Cliffhanger Chapter Ending:
Ch. 12/13:
The cab driver wants to get paid his fare. But the twist is that's how cabs work, you pay to ride inside them.

Conclusions:
A Night in Terror Tower is well-written, but ultimately more jolly bad than jolly good. Get it, like Britons talk lolz it's a British book.