Goosebumps: Be Careful What You Wish For (Book Review) 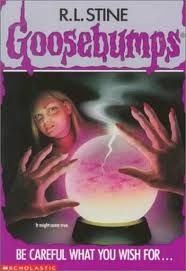 Front Tagline: It might come true.
Back Tagline: Make a Wish!

Official Book Description:
Samantha Byrd is a klutz. An accident waiting to happen. She's the laughingstock of the girls' basketball team. And that mean, rotten Judith Bellwood is making her life miserable on and off the court.
But everything's about to change.
Sam's met someone who can grant her three wishes. For real.
Too bad Sam wasn't careful what she wished for.
Because her wishes are coming true.
And they're turning her life into a living nightmare!

Brief Synopsis:
Samantha Byrd is a tall klutzy girl who is constantly being tormented by Judith, a moderatly popular girl who taunts her with biting material like "Fly away, Byrd." At one point in the book Samantha literally strangles Judith in rage, so there's an element of anger issues between these two. Samantha is a terrible basketball player and is forced to stay late from school for practice.

One rainy afternoon after practice she meets a lost old lady in the woods and in a smart move not only talks to this stranger but goes with her to another location. The old lost woman is so thankful for Samantha's kindness that she grants her three wishes. Samantha's first wish is the awkwardly phrased "I want to be the strongest player on the basketball team." This leads to all the other players on the team, including Judith, coming down with the flu. Judith accuses Samantha of being a witch, possibly from being stuck at home sick in a Bewitched-induced haze, and in anger Samantha responds that she wishes Judith would just disappear.

When Samantha wakes up the next morning, she's the only person left in the world. Samantha frets and also eats a peanut butter sandwich in what would prove to be the inspiration for that scene in Speilberg's War of the Worlds. After some aimless wandering the old woman appears and says that she's apparently not very good with magic so the only way she could make Judith disappear was to make everyone disappear. I don't think we can really blame Samantha for the failure of this wish though since it's not even what she sort of wished for. The old woman says she'll cancel the wish and give her the third wish. Samantha wishes everything was back to normal and that Judith would think she was the greatest person alive.

This wish is then granted in an extended finale that is actually pretty clever as Judith obsesses over every nuance of Samantha's being, carrying her books to class, sneaking into her bedroom at night, and waiting outside her house in the morning to walk to school with her. Finally after crashing her bike in an attempt to get away from Judith, Samantha runs into the old woman who gives her a fourth wish, which is totally cheating by the way. Samantha wishes that she had never met the old lady, that instead it was Judith who met her.

But the Twist is:
As Samantha leaves the wooded area, she looks down at a smiling Judith, who has just said "Why don't you fly away, Byrd?" Samantha has been turned into a bird.

the Platonic Boy-Girl Relationship:
Samantha Byrd, our narrator and the tallest girl in school, is best friends with Cory Blinn, the tallest boy in school, who disappears about half-way thru the novel.

Questionable Parenting:
Upon hearing voices from his teenage daughter's bedroom late at night, Samantha's father stays downstairs and tells her to get off the phone.

Questionable Teaching:
The book opens with Samantha getting mocked by her peers for not knowing that four plus two equals six. Now, putting aside that the girls were right to laugh at her because that's not a very hard equation, I think the real problem here is that the characters are being taught 4+2=6 in middle school.

R.L. Stine Shows He is Down With the Kids:
Samantha's older brother suggests she might be better off playing tiddlywinks or Parchesi.

Foreshadowing Alert:
Number of times Samantha is told to "Fly away, Byrd" or some variation there-of: 13.

Memorable Cliffhanger Chapter Ending:
Ch. 3/4: Samantha thinks she's going to die, she's dead, she's... been knee'd in the chest by Judith.
Ch. 8/9: Samantha in a moment of thoughtlessness wishes her brother was one foot tall, because that's the sort of thing one says casually. She's shocked to see her brother coming across the lawn towards her, and he's only one foot tall... wait, no, that's not her brother, that's the family dog.
I think the main characters of these books need to quit being so melodramatic and stop jumping to conclusions.

Conclusions:
The last thirty pages or so of this early book in the series are so unflinchingly cruel and genuinely funny that it reminds me why these titles got so popular so quickly. The novel is still afflicted with a lot of the problems that these books suffer from, but regardless this is definitely a higher-tier Goosebumps entry.