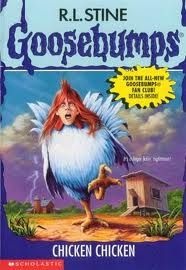 Official Book Description:
Everyone in Goshen Falls knows about weird Vanessa. She dresses all in black. Wears black lipstick. And puts spells on people. At least, that's what they say.
Crystal and her brother, Cole, know you can't believe everything you hear. But that was before they made Vanessa mad. Before she whispered that strange warning, "Chicken chicken."
Because now something really weird has happened. Crystal's lips have turned as hard as a bird's beak. And Cole has started growing ugly white feathers all over his body...

Brief Synopsis:
Crystal, a tall redheaded girl who is told by a farmer early on that she should be a model, because that is something farmers often say, and her younger brother Cole live on a farm in a small town. Their parents made them move to a farm a few years back, and now the two kids have to do horrible chores like cleaning up after the chickens in the coop.

Cole is a bit of a prankster because this is a Goosebumps book and he's not the main character, so he is involved in hilarious pranks like how he comes down to breakfast one morning with red blotches all over his face, pretends to collapse, and as his mom is dialing for the doctor reveals that he drew the blemishes on with a red Sharpie. Of course the mom and Crystal believe him. I like to think the true prank in this case is on God, considering how stupid his creations are for confusing red permanent marker for blisters.

In this small town there lives a weird woman named Vanessa who dresses in black and is described at the beginning of the book as being roughly the same age as the main characters but at some point turns into an old spinster, and this would probably a much greater source of contention if it weren't for the vast amount of truly insultingly terrible occurrences that pop up later in the book. She's the resident weird person in a small town, so we're introduced to her as a herd of children are planning to prank her good. Cole and his friend Anthony dare Franny and Jeremy (two kids whose full names are given in the book while the main characters remain last nameless. Franny and Jeremy are never heard from again after page nine), to pour water into her mailbox. I don't know, don't ask me. And especially don't ask me why they carried the water over to her house in large pitchers. I'm a city boy, I guess, with my fancy lidded containers for water. The kids pour water into her mailbox and luckily it's somehow exactly as successful a prank as pouring water into a box can be.

Jeremy and Franny run away while Cole, Crystal, and Anthony stick around long enough to get caught by Vanessa, who doesn't do anything. This entire event that starts the book has no bearing on anything that follows. It will be the first of many times in this book that Stine seems to be daring the reader to find any reason at all to continue reading.

The next day, Crystal has to go to the market to buy her best friend Lucy-Ann a CD for her upcoming birthday. Oh, I bet she'll love Album by the Group on CD!

While in town, Cole and Anthony follow Crystal around, tossing an egg between themselves. Eventually the egg lands on Anthony's head and he gets mad because somehow he's the only person in the entire universe who didn't see how this would end. He charges Cole and the two fight for several pages until they knock over Vanessa as she is exiting the grocery store. She falls and her grocery bags rip open, spilling her purchases everywhere. Anthony runs off scared, apologizing as he scatters away. Crystal and Cole just sort of stare at her and she whispers "Chicken chicken" to them. They run away.

Back at the house, Cole teases Crystal about how one of their old classmates once upset Vanessa and she turned his head into a giant sponge. This "joke" about the sponge-head is repeated at least three or four times at the beginning of the book, until it achieves a sort of Quantum Physics moment where it becomes less funny than where it started, at the Least Funny Thing Possibly Ever point.

I'm going to move quickly through the rest of the book, because to dwell would be inhuman. Gradually the two kids turn into giant chickens. This sounds pretty funny, I know, but imagine actually slowly turning into a chicken. The kids grow feathers on their neck and shoulders, which they prick out and leave bloody holes. They continue to prick out their feathers for a span of several days in what amounts to extended periods of self-mutilation. Cole's voice is the first to go, as his singing voice during choral practice slowly devolves into nothing but clucks. I imagine that RL Stine began penning this one with the intention of making the kids turning into chickens scenario a parallel to puberty (voice changing, new hair, etc), but that's something real writers can muster. Stine avoids any chance of there being a subtextual payoff and instead turns the book into a calvacade of unpleasant events:

Crystal is at Lucy-Ann's birthday party when her lips turn into a beak. She locks herself in the bathroom, panics, and sneaks away from the party. At home, her parents won't listen to her or her brother. They're planning a big barbecue and are oblivious to their children. When the guests arrive, Cole and Crystal go into the chicken coop and pick up chicken feed with their beaks as the party guests laugh and ridicule them. This is one of many horrible scenes. I can see how this could be funny, in theory, but it's not. It's needlessly cruel and mean-spirited, making the kids not only freaks but freaks on display. The worst part is that the people laughing at them don't even notice the actual bird-like attributes of the children, thusthey are humiliating the children at face value.

Crystal and Cole suffer various other humiliations, including Crystal finally getting a chance to be a star-player in the basketball game, but she can't stop bobbing her head like a chicken and clucking and then growing feathers as she runs away from the auditorium in tears. The two kids visit Anthony, who has had no adverse reactions in the past week except that suddenly he's a great golfer. I guess Anthony's got some sort of Bagger Vance sideplot that got cut from the final book in order to fit in more needless humiliation of the main characters. Then their hideous mutation into a chicken gets worse as their eyes move to the side of their heads and their fingers turn into claws. This isn't scary like a horror movie, it's just grotesque and needlessly sadistic.

Crystal and Cole decide the only way to save themselves is to apologize to Vanessa. They go to her house, and seeing that she's not there, they naturally do the smart thing and break into the witch's house. Crystal sees a book called Chicken Chicken Chicken, swipes it, and the two safely return home only to find out that they've stolen a cookbook. (Pause for laughter, applause) They then go back to the house again, find a magical spell book, and perform various spells that first turn them into twenty feet tall chickens, and then into baby chicks. Vanessa's cat eats Crystal, then throws her up and plays with her. What.

Vanessa finally comes home and sweeps the two chicks up in her hand. She asks them if they like the lesson she's taught them. She points to her bookshelf full of books on manners. Kids today have no manners she tells the chicks, so she turned them into chickens to teach them a lesson about not apologizing when they knocked her over. She fails to mention where deforming children falls on the politeness meter. Crystal the baby chick leaps out of Vanessa's palm and lands on a convenient typewriter and types out an apology. That doesn't do much, so she then types out a Thank You Letter to Vanessa for teaching them the error of their ways.

Vanessa is so impressed that a child would write a Thank You Letter that she turns them both back into normal kids. We've just been taught a lesson. This was about a lesson on manners. How is this any different than the eight-year old kid who gets beaten by his father with a belt for not showing the proper respect? I'm not entirely comfortable with the book's message that these kids deserved to be tortured both physically and mentally to teach them a pithy lesson in saying "Thank you."

But the Twist is:
She offers them some soda to drink, as they are probably parched from all the abuse she's doled out on them. Cole drinks his cup down and then burps. Vanessa whispers "Pig pig" and I literally threw the goddamn book across the room.

the Platonic Boy-Girl Relationship:
Crystal and her little brother Cole, whose chances of not being emotionally and physically scarred for life disappear halfway thru the book.

Questionable Parenting:
Crystal's parents insist on feeding her and her brother chicken for every meal during their transformation. I know, you're saying "But they didn't notice," and my response to you would be that that is hardly a defense against Questionable Parenting.

Questionable Teaching:
After Crystal grows a beak, she still goes to school, where apparently no teacher or schoolmate notices that she's grown a beak.

Early 90s Cultural References:
Lucy-Ann gets a Discman for her birthday.

R.L. Stine Shows He is Down With the Kids:
Finally, a children's book that covers the Egg Throwing fad of the early 90's!

Memorable Cliffhanger Chapter Ending:
Ch. 6/7:
This is the actual chapter break for Chapter Six: "And that's when all the frightening stuff really started."

Great Prose Alert:
"Her black lipsticked lips were open in an angry cry."

Conclusions:
I will be perfectly honest with you, Blogger Beware reader, I had a lot of trouble coming up with things to say about this book that weren't just a string of swears and empty threats against the author. I poke a lot of fun at these books, but that's still in part due to a less than hidden fondness for the material. Some of the books in this series are bad, some more than others, but Chicken Chicken exists on a whole other plane of quality. It's not just a bad book, it's an ugly one.
For anyone who has been craving 112 pages of fantasy child abuse, I think you could do no better than this novel. For everyone else, I can not possibly foresee any other Goosebumps book I read being worse than this.

This month, September, is National Chicken Month. Chickens are a type of domesticated poultry, and a…