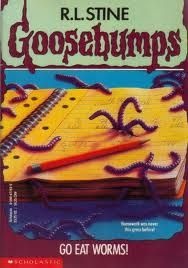 Front Tagline: Homework was never this gross before!
Back Tagline: They're Creepy and They're Crawly-- They're Totally Disgusting!

Official Book Description:
Obsessed with worms? That's putting it mildly. Todd is so fascinated with worms, he keeps a worm farm in his basement! Most of all, Todd loves torturing his sister and her best friend with worms. Dropping them into their hair. Down their backs.
Until one day, after cutting a worm in half, Todd notices something strange. The rest of the worms seem to be staring at him! Suddenly worms start showing up in the worst places for Todd. In his bed. In his homework. Even in his spaghetti!
What's a worm lover to do when his own worms are starting to gross him out?

Brief Synopsis:
Todd loves worms. He loves digging them up on the baseball diamond behind the school after it rains, loves collecting them in an aquarium in his basement, loves tormenting his sister Regina and her best friend Beth with them. Luckily his best friend Danny always gives him a hand in collecting worms, even though he doesn't quite share his friends enthusiasm. Todd's known as that kid who always wears the Raiders cap and loves worms. If you hadn't already guessed, this book isn't exactly setting itself up to be quite the scare we were bewared about on the back cover.

Todd's planning on entering a worm house in the Science Fair. The Worm House is a wood house with worms inside, and between this and his sister's project that involves a giant paper mache bird, this school's Science Fair seems fairly loose in terms of the submissions being science related. On a side personal note, in second grade I entered the school Science Fair with origami made of aluminum foil and placed 77 out of a hundred, which means there were 23 worse science projects than origami made with aluminum foil.

Todd learns that Patrick, a rich blonde good-looking kid, is also entering a worm-related project in the Science Fair. Todd becomes obsessed with finding out what his project is, to ensure that his will be better than Patrick's. Regina tells Todd Patrick's address and Todd and Danny set off late at night to first meet with Patrick to try and get an answer from him, and then later when they see his mansion is abandoned, they decide to break in and see his project. Then an evil spirit dog chases them and they see a corpse inside the house and run away. What.

Todd overhears his sister the next day talking to Beth on the phone about what a great trick she played, sending the two boys to the abandoned mansion where some kids threw a Halloween party a few months ago. Todd gets revenge on her by putting worms in the beak of her paper mache bird, which she's named Christopher Robin. Regina accidentally opens the bird's beak when the Science Fair judges walk by and they land on the head of the judges.

Patrick sets his project down next to Todd's modest worm house and reveals that he has built a massive worm skyscraper, complete with working elevators. The judges spend a considerable amount of time on Patrick's project, mostly ignoring Todd's. Todd is furious, especially sincehe's the worm expert. He had even refused to let Danny help him with his project, leaving Danny to build a pathetic solar system representation made out of balloons, half of which deflate by the time the judges come around.

The judges announce the winner of the Science Fair... Danny and his balloon solar system, in a moment that is actually funny. Also, at some point in the Science Fair scene, there's a crash and one of the teachers goes, "WAS THAT THE ACID?" All I could think of was how I'd much rather read the book about the kid that dropped the beaker of acid than the book about a kid who likes worms.

Regina, furious over Todd's sabotage of her project, attacks Todd and the two quarrel, knocking over Patrick's worm skyscraper, which falls and lands on the Liquids and Gases project. This is followed by maybe the single best line ever uttered in Goosebumps history, as a girl screams "Look out-- It's Liquids and Gases!" Then, be with me on this, there's an explosion, but RL Stine doesn't even write about the explosion. I guess the previous 40 pages of worm digging were far more exciting than writing about a middle school science fair ending in an explosion. No one's hurt, and no one mentions again in the book that the school gym exploded.

Todd goes back to digging up worms out by the baseball diamond. Danny and Todd have been noticing a low rumble everytime they go out to the diamond to dig, and they even embarrassed themselves in front of the student body by proclaiming they were experiencing an earthquake.

Todd collects a bucket of worms and carries them back to his basement, where Regina and Beth are hanging out. Todd shows them a "neat" trick: he takes a worm and slices it in two. The two halves continue to wiggle forming two worms. Regina tells Todd that the worms in his fishtank are watching him, that they know what he did and they're not happy. That they'll take their revenge on him. The next day, Todd's baseball cap is filled with worms. OH MY GOD, THE WORM'S REVENGE, IT IS SO HORRIBLE!

Now, for those readers who have been craving a book that answers the dramatic question Will there be some worms where there aren't usually worms?, this is surely the book for you. For everyone else though, get ready for 50 pages of Todd finding worms in his bed, his food, his homework, so on. He becomes so convinced that the worms are seeking their revenge that he sneaks down to the basement to apologize to the worms, when he's caught by his father, who is wielding a baseball bat. Todd's father tells him he has to get rid of his worms once and for all.

The next day at school, Todd walks to class in the pouring rain. When he enters the school, he and Danny overhear Regina telling her friends about how she's been the one freaking Todd out, carefully placing worms all over his things to get him back for sabotaging her project. Todd drags Danny out to the baseball field to dig up worms after school. The rain's cleared and all the worms are coming out, the perfect time to grab some worms and get back Regina with... more worms.

As Danny and Todd are digging around in the ground, they feel the rumble again and a giant worm the size of a tree trunk pops out of the ground, grabs Todd, and drags him underneath the soil of the baseball diamond. Danny waves at Regina and Beth, who are walking along the edge of the diamond, to help him. They are busy carrying their paper mache bird, the shadow of which falls onto the baseball diamond, casting the shadow of a giant bird. The giant worm sneaks back out of the soil, sees the bird shadow, and releases Todd from his grasp. Todd decides to abandon his worm hobby once and for all, and he begins to collect beautiful butterfly specimens instead, to the delight of his sister.

But the Twist is:
This is the real ending. I sincerely wish I was kidding though:
Todd is awakened by a giant butterfly holding a huge silver pin who has shown up to take revenge.

the Platonic Boy-Girl Relationship:
Though there is a brother-sister dynamic, this book is one of the few entries to not contain a platonic boy-girl friendship/kinship, as the major relationships are between Danny & Todd and Regina & Beth, whose hopes of winning the Science Fair disappear half-way thru the novel.

Questionable Parenting:
Todd's mom asks his sister if he's "a grunge." What does that even mean.

R.L. Stine Shows He is Down With the Kids:
Two separate characters utter the phrase "Cool move, ace!" Is this RL Stine trying to create slang?

Memorable Cliffhanger Chapter Ending:
Ch. 19/20:
Todd peels back the slices of his bread to reveal... no worms. But look, let's say there were worms, that's still not a very strong chapter break. "Oh man, I can't wait til the next chapter to see if there really are moreworms in this book!"

Conclusions:
Go Eat Worms! seems to be one of the books in the Goosebumps series that has failed to leave a strong impression over time. I imagine that for most of you reading this entry, this is the first time you've even remembered it existed. So slight is the book that I forgot I was reading it while I was actually reading it.

Tempting Eatables Food is the most important part of our life, without it life can never be consider…

Five good reasons to eat watermelon are described below: It helps in water balance in the body and …

Are you ready to eat pizza...uhmmm

How To Make Pizza at Home What You Need Ingredients 1 pound pizza dough, store-bought or homemade1…

Are you ready to eat pizza...uhmmm

How To Make Pizza at Home What You Need Ingredients 1 pound pizza dough, store-bought or homemade1…

I LOVE THIS AWESOME GAME

Subnautica is an open world, underwater exploration and adventure game currently under construction …