Goosebumps: I Live in your Basement (Book Review) 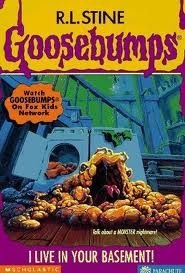 Front Tagline: Talk about a MONSTER nightmare!
Back Tagline: He's Got the Basement Blues!

Official Book Description:
"Don't do this! Watch out for that!" Marco's mom thinks the whole world is a danger zone. She won't even let Marco play softball.
But Marco just wants to have fun. So he sneaks off to a game. And that's when it happens. He gets hit in the head with a baseball bat.
Now things are getting really fuzzy. Really scary. Because when Marco gets home he gets the strangest call. From someone who says he lives in Marco's basement...

Brief Synopsis:
This synopsis is going to be incredibly convoluted and hard to follow, so there will be a flowchart explaining the relation of events to other events in the book at the end of this article.
Marco's mom is incredibly overprotective. She warns him against all sorts of silly things, like not letting a dog lick your face, not running in the house, and not playing with needles you find on the street. Real overprotective stuff. One afternoon, Marco's school lets out early and he sneaks off to go play softball without telling his mother, who would not approve of such a thing since it's not safe and also she's a woman.

As Marco gets ready to play ball with a group of kids, including his best friend Jeremy, Gwynnie, a tall athletic girl hits Marco hard in the head with a bat. When Marco wakes up, he's lying on his couch, his mother asking if he's alright. She scolds him for playing dangerous sports games and tells him the doctor said he'll recover after a few days of rest. Marco's mom leaves the room and the phone rings. Marco answers it and a boy's voice on the other end tells him that he's glad he's alright, because "You're going to take care of me." Marco asks who he is and the boy tells him his name is Keith and he lives in the basement. Marco tries to tell his mom about the spooky call but she informs him that he couldn't have received a call because there's no phone in the living room.

The next morning, Jeremy stops by to visit Marco, who is under strict orders not to leave the house. Jeremy and Marco entertain themselves, but certainly not the reader, by playing pool in the basement. I know that after 60 books, it's a little hard to think of things to write about, but the only thing more boring that playing pool is reading about 12 year-olds playing pool. Marco is worried that the mysterious "Keith" might be hiding in the basement, and the two boys go on to discover a squirrel that they confuse for the mystery boy. I know Marco has a head injury, but what is Jeremy's excuse for confusing a squirrel with a basement boy?

That night, Marco can't sleep, so he goes downstairs to fix a midnight snack. He sees the basement door is open and hears footsteps from within. He calls out to see who is there and Keith calls back, reminding him that he lives in Marco's basement. Marco's mom comes downstairs to use the laundry room and when Marco tries to tell her about Keith, Keith yells from the basement for Marco to "Listen to his mother." At least the mystery basement-dweller has manners.

The following Monday, Marco's mom lets him go back to school. Marco's teacher forces him to stand in front of the class and talk about having to go to the hospital, but Marco can't remember anything about going to the hospital. After class, Gwynnie chases after Marco with a bat and he scampers away from her. Once at home, he walks upstairs and is greeted by a young boy with black hair and sunken eyes sitting on his bed. It's Keith. Marco panics and locks Keith in his room, running down to get his mother.

When Marco brings his mom back, he discovers that he has only succeeded in locking in the family dog. Marco's mom is worried and decides to take him to the pediatrician, Dr. Bailey. The bald doctor informs Marco, after listening to his story, that he's going to need his brain removed. What. He explains that it's an easy procedure, they just crack open his skull and the brain slides right out. Marco's mom agrees with him, arguing that since he's a doctor, he must be right. Marco convinces the two to give him time to get better and they agree to give him a chance. This is immediately followed by what might be the best line I've ever read: "Mom said not to worry about losing my brain."

Back at home, Marco attempts to work on a creative writing assignment but suddenly the screen turns off his word processor and only shows a large picture of Keith's face. Then Marco is choked by Gwynnie, who is in his room... I don't know why, nothing in this book makes sense, I guess why bother trying to figure it out at this point, right? Gwynnie tells Marco that she stopped by to apologize for hitting him in the head with a bat, and that earlier she was chasing after him to apologize. That's a little like OJ Simpson saying he was fleeing in the white Bronco to go turn himself in.

Marco tries to show Gwynnie the computer with Keith's face on it, but it turns out the computer wasn't even on. Okay. Marco convinces Gwynnie to go down with him into the basement to see if they can find Keith. She goes with him, they don't find Keith, and then-- wait for it-- Gwynnie stands at the top of the basement stairs and pulls her entire body inside out through her mouth, the lungs and heart passing past her teeth.

Marco screams so hard that he wakes up in the hospital. Marco's mom is there, and so is Gwynnie. Marco screams for his mom to remove Gwynnie, but she won't, because Gwynnie is Marco's sister. Marco realizes that he had dreamed she wasn't his sister and that it was Jeremy who had hit him with the bat. They leave him to rest in the hospital room, and finally Dr. Bailey enters when Marco is by himself. Except that Dr. Bailey now has wavy blonde hair and a tan. He starts to examine Marco, then begins pulling on his tongue, stretching Marco's tongue out like taffy while Marco screams and screams.

Then Marco wakes up again. Dr. Bailey, this time a 7-foot tall bearded man, asks him if he's feeling any better. He then delivers a handwritten note to Marco. The note is from Keith, telling Marco to hurry up and feel better so he can rush home and start taking care of him in the basement. Marco tries to tell his family about the letter from Keith, but Dr Bailey doesn't seem to know what Marco is talking about. When Marco goes to grab the letter, it's disappeared.

The next morning, Marco is allowed to go home and his mom lets he and Jeremy watch a movie and eat homemade pizza, which features hot dog slices instead of pepperoni. Ballpark frankly, that's more disgusting than someone pulling their insides out through their mouth. After the movie's over, Marco tells Jeremy he's tired and goes upstairs. In his room, he runs into Keith.

Keith tells him that he's real, and he is waiting for Marco to take care of him, to take care of everything he needs. Marco panics and hits Keith in the head with a stone owl. Keith drops to the floor and melts into a gelatinous substance not unlike that pictured on the cover of the book. The gelatinous creature surrounds Marco, enveloping him. Marco struggles with it all the way downstairs, where he slams it against a cabinet, breaking it in two. The two pieces form two monsters and both attack Marco on either side. Marco rolls around on the ground screaming until his mom asks what he's doing. There are no gelatinous creatures on Marco. Marco can no longer tell if he's dreaming or awake.

His mom sends him up to his room, where Keith is waiting for him. Marco tells Keith that he gives up, that he'll do whatever Keith wants. Keith gets very excited and tells him that he's going to go down to the basement and work up a list of all the things Marco will have to do for him. But first, Keith opens his mouth and vomits out all his veiny yellow insides.

The narrator screams and wakes up with his mom comforting him. She tells Keith, the narrator, that he shouldn't' have gone and played softball with Marco, and that just because Keith lives in the basement and looks like a human, he's still a monster and can still get hurt. Keith relaxes and vomits up his insides, which makes him happy.

the Platonic Boy-Girl Relationship:
Marco and his friend/sister Gwynnie, who's insides appear halfway thru the book.

Questionable Parenting:
Marco's mom tells him if that if he doesn't eat a bowl of cereal, acid will eat through his stomach. I'm not a dietician, but I don't think that's how cereal works.

Memorable Cliffhanger Chapter Ending:
HALL OF FAME CLIFFHANGER:
Ch. 21/22:
"It wasn't a dream."
"And then I woke up."

Great Prose Alert:
"Dr. Bailey tugged hard on my tongue. It slid out of my mouth, as long as a hot dog."

Conclusions:
I dreamed I was dreaming about a dream where I dreamed of dreaming that I had dreamed that I read I Live In Your Basement! But wait... that was no dream! I think that any kid's book that requires an adult reader to write out the exact relationships between events is probably not a particularly effective work of literature. That said, I enjoyed this one a lot more than I anticipated. Written at the tail end of the series (there would be only one more book after), the novel is basically a pisstake, but it's a pretty good pisstake.