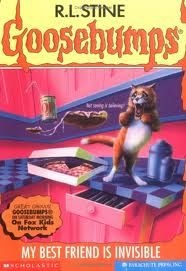 Official Book Description:
Sammy Jacobs is into ghosts and science fiction. Not exactly the smartest hobby--at least not if you ask Sammy's parents. They're research scientists and they only believe in real science.
But now Sammy's met someone who's totally unreal. He's hanging out in Sammy's room. And eating his cereal at breakfast. Sammy's got to find a way to get rid of his new "friend." Only problem is...Sammy's new "friend" is invisible!

Brief Synopsis:
You might think that a Goosebumps book that fulfills its scientist quota so excessively would have a lot going for it. Protagonist Sammy Jacobs has two scientist parents and a scientist-in-training younger brother, Simon. But all the bunsen burners in the world can't ignite a single spark of interest in this book. See, Sammy's the black sheep of the family because he doesn't care about science, he cares about science fiction. He busies himself reading books about ghosts and aliens while his brother, who apparently caught Porky's on USA Up All Night, is fast at work measuring the growth of his body every day. C'mon, every single day?

Sammy's parents can't deal with the fact that the son of two losers is somehow an even bigger loser than they are, so they spend their time at home ignoring him, opting to pour over Science Reports instead of parenting. Sammy's so unpopular lately that even the family cat, Brutus is ignoring him, a situation to which he wittily quotes Shakespeare, "Now is the winter of our discontent."

Luckily for Sammy, he does have his friend Roxanne, who comes over to berate Sammy for being such a poor athlete. Apparently Sammy lost a track meet earlier in the day and Roxanne wants to make sure he does a better job at the mini-Olympics later in the week. Sammy says he merely let her win and assures Roxanne that he will both run faster and put on the red light.

With that settled, Roxanne and Sammy get to work brainstorming about their English term project. Sammy suggests studying the life cycle of a moth or charting the growth of plants. Roxanne wants to film a haunted house over the weekend. At no point do either of them consider any project related to English for their English project.

Their wild speculation is interrupted by a mysterious light that appears in Sammy's room. The source of this light is revealed to be a special magic flashlight belonging to Sammy's dad that allows invisible organisms to be made visible. For some reason this light scared Sammy and Roxanne, perhaps because they have a phobia about telegraphed twist endings.

Roxanne resumes trying to sell Sammy on the haunted house idea by quoting a bunch of "facts" from books about hauntings. The haunted house is called the Hedge House because there are hedges in front of the house. Expectant mothers, I think you can cross any paranormal investigators off your list of people to ask for baby name suggestions. Instead of visiting a haunted house, Sammy would much rather spend his Saturday watching the new horror movie School Spirit. His father overhears and confuses this with his son actually having school spirit. Wow, a father who only cares about sports, really knocking those cliches out of the park with this one, Stine. Get it, more sports

After Roxanne leaves, Sammy becomes convinced that someone's messing with him, as his window is open and his papers scattered around the room. He's sure that a ghost is responsible, but maybe he just lives in the Watergate apartments. The next morning he discovers that Brutus opted not to sleep in his room as per usual, as though a cat doing whatever it wants was in any way news. He sits down for a nice bowl of cereal, only to discover that while his head was turned away from the bowl, the ghost has eaten all of his cereal. The ghost ate his cereal.

At school, Sammy is called to the front of the class to solve a math problem. The polynomial equation takes a quadrastic turn though as an invisible clammy hand grasps Sammy's and he runs from the room in hysterics.

Back at home, Sammy witnesses the scene depicted on the cover of the book. The cover art really captures how totally lame a ghost eating pizza is, though to Stine's credit he didn't include the pictured church-key soda can. Sammy's mother takes a pause from not paying attention to him to scold him for eating pizza. She then tells him to clean up his room. When he heads upstairs to do as instructed, he discovers that someone has strewn cereal and lunchmeat and other foodstuffs all over his floor. After checking in the hallway for precocious youngsters or feuding heterosexual couples who don't realize their feelings for each other, he comes to the conclusion that only a ghost could have caused this food fight. Then the ghost speaks up and confirms this.

Except the voice is not a ghost at all, but an invisible boy named Brent Green. He's twelve too and wants very badly to be Sammy's best friend. He explains that he doesn't know how he got to Sammy's house or who his parents are, but he's hungry and wants to be Sammy's friend. Sammy tries to get his family to come see his invisible friend, but you can imagine how well that goes. Not even Roxanne believes him, though she does tell the entire student body about it so they can mock him properly at school the next day.

Things get so bad for Sammy that he has to eat lunch alone in the library. That doesn't work out so well, as Brent followed him to school and starts eating his sandwich. Sammy begs him to go away but Brent insists that he's just trying to be his friend. Brent proves his friendship by ruining Sammy's turn in the relay race, costing his team the game. With friends like this, who needs visibilities amirite

To make it up losing the race to Roxanne, Sammy is forced to agree to accompany her to the haunted house that weekend. Beforehand though, Sammy tries every trick in the book to convince Brent to leave. He tries to get him to live with Roxanne because she has better food but Brent doesn't want to be friends with a girl. Ruh roh, no one tell Jessica Valenti about this book!

Brent sees that Sammy's trying to get rid of him and attempts to throw him out the window. He stops himself before he actually murders Sammy though and explains that he was just goofing around in a familial way, which makes perfect sense only if you're a cast member of Dallas. Brent finally leaves after Sammy turns up the radiator high enough to produce steam in his room, proving the old adage true: if you can't stand the heat, stay out of the house of the boy you're bothering.

Anyways, Roxanne and Sammy are at the Hedge House, ready to bust some ghosts. And whadaya know, a ghost does show up. Upstairs in the spooky house, the ghost angrily picks up Roxanne and starts throwing her around the room. Then the ghost picks up a pillow and tries to smother her. Oh my God, the ghost is Albert Finney!

Roxanne and Sammy flee from the house, having learned an important lesson about just writing five paragraphs on Of Mice And Men instead of getting murdered by ghosts for their English project. Back at home, Brent reveals that he was behind the whole charade. Shocker. The invisibully refuses to leave.

Sammy's parents announce that his erratic behavior has caused them to set up an appointment with a mental institution for their son. Before he can be taken away though, Sammy breaks free and runs down to his parents' basement to grab the magic flashlight. He forces the rest of the family and Roxanne to follow him to his room, where he shines the light on Brent, revealing...

But the Twist is:
A HIDEOUS MONSTER. Brent reveals that his mother made him invisible so it would be easier for him to make friends.

Sammy and his family can't figure out how Brent can survive with only one head, two eyes, and two short arms that aren't even long enough to wrap around his body. They can't stop being disgusted at how he has hair on top of his head instead of suction-cupped tentacles. Sammy's father explains that this creature is a human and its their duty to call the zoo, as humans are an endangered species. What.

the Platonic Boy-Girl Relationship:
Sammy and his "pal" Roxanne, who doesn't buy that Sammy has a disappearing friend halfway through the book, primarily because it would involve assuming someone would want to befriend Sammy.

Questionable Parenting:
Simon quips that they can use the magic flashlight to search for Sammy's missing brain, causing the entire family to burst into laughter. I'm not upset about the parents mocking their son, I'm upset that the joke wasn't funny.

Questionable Teaching:
Even Sammy's teacher mocks him by pretending to call on an invisible student. That's going to really blow her credibility concerning attendance sheets.

R.L. Stine Shows He Is Down With the Kids:
No one has an ear for the natural dialog of children like Stine:

"How could you -- you stupid clumsy cretin!" she shrieked.

Out of Context Text Alert:
"I bet we hear moaning soon. Make sure your camcorder is ready."

Memorable Cliffhanger Chapter Ending:
Ch. 3/4
There's nothing on the floor. Nothing except... nothing.

Conclusions:
An extraordinarily obnoxious book where nothing happens, every character is grating, and the final twist makes absolutely no sense, My Best Friend Is Invisible is reference-level terrible.

For all women with cancer? She's beautifulAnd I mean in loveShe is the oneShoot my heart like a g…

1. The CCN Bitcoin FaucetCCN recently started our own bitcoin faucet, with the goal of introducing o…