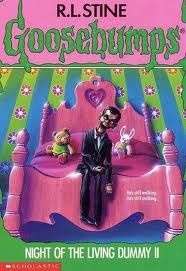 Official Book Description:
Amy's ventriloquist dummy, Dennis, keeps losing his head...for real. So Amy begs her family for a new dummy. That's when her dad finds Slappy in a local pawnshop. Slappy's kind of ugly, but Amy's having fun practicing her new routine.
Then terrible things start happening. Horrible, nasty things. Just like what happened the first time.
Because there's something odd about Slappy. Something not quite right. Something evil...

Brief Synopsis:
When we last left Kris and Lindy, they had just discovered that Lindy's ventriloquist dummy Slappy was alive. Like Mr. Wood, Slappy had some notion that he was able to keep human preteens slaves and the readers of the first book were left breathless with suspense. Hypothetically.

Well Jean Seberg, take a huff because everything you as a reader (or blog reader) had invested in the first book (or the first entry) has been washed away with no explanation at all. I guess it's easier for a ghostwriter to just start over rather than actually read the first book. So what are we left with? The strong, universal theme of children enjoying ventriloquy.

Amy has NPR Parents, so every Thursday the entire family gathers around for Family Sharing Night. Structured much like a talent show only with fewer dance routines by the school sluts, the weekly event requires every member of the family to "share" something tangible with the group. Amy's older sister Sara is a skilled artist, so every week she shares a new painting with the family. Jed, Amy's red-haired younger brother, is a total jerk, so every week he shares things like notes boys wrote to Amy or belches. Dad shares songs and Mom shares stories, which leaves Amy with her sea shell collection and of course her ventriloquist dummy Dennis.

As the book opens, Amy is giving her family a killer ventriloquist routine. It's such a good routine. Like, you're just sitting there, hoping there'll be a pun about how the dummy is made of wood and POW there it is. And asking if that in turn will be followed by a play on how the word "dummy" has multiple meanings is as rhetorical as asking if hipsters love Zooey Deschanel. Before Amy can get to a killer political riff on water-boarding, the head of her dummy falls off. Oh cool I've seen that episode of the Simpsons too.

Sara follows this tough act by sharing something actually good: her new painting. Only that rascal Jed has painted a big yellow smiley face over it. Since this act contains no puns, the family does not laugh at Jed's vandalism. Jed tries to argue that this act was a form of protest against Wal-Mart, but to no avail.

Amy's friend Margot rushes over to tell her that her dad, who owns a restaurant called The Party House, wants Amy to perform her act for a group of three and four year olds. He'll even pay her $20. That may not seem like much, but accounting for inflation, $20 is like $20. What will Margot's dad be paying for exactly? Well allow me to share some of Amy's new routine with you:
Knock Knock.
Who's there?
Jane.
Jane who?
Jane jer clothes, You stink!
Amy knows that joke will kill with three year olds because a three year old had to have written it.

At the next Family Sharing Night, Amy's dad, I kid you not, plays "Maggie's Farm" on his guitar. Between Dylan and VU, I look forward to next week's Nico of the Living Dummy. Amy is enjoying herself when she spots her old ventriloquist doll Dennis crawling along the floor of the living room by himself. Amy freaks out and screams "It's the night of the living dummy roman numeral two!" Her family just starts laughing as Jed redeems himself by revealing that he has swiped Dennis's head. Amy's father praises Jed for being so clever by pretending to be a dummy. Amy starts her knock-knock routine with Slappy. But before Amy can break out the hilarious punchline of "Wayne Wayne go away," Slappy begins viciously insulting her parents. He calls her mom fat and her dad bald. Amy tries to explain that Slappy just calls them as he sees them, but her parents become furious. Then Slappy drops the u-bomb: "Did I mention you are all ugly?"

The next day, Amy comes home with a bad report card and is grounded. She sneaks a phone call to Margot, who is also grounded for bad grades, and they briefly discuss the show at the Party House next week. Then Amy starts working on her report for science class. Once it's typed up, she realizes that it needs a nice drawing on the cover and goes into Sara's room to borrow some markers. This is always a good idea no matter what grade you're in, as even professors love marker drawings of Samuel Richardson's Pamela. A little while later, Sara comes home from the Banana Republic and discovers someone has smeared paint all over the white carpet in her room. The family naturally begins to blame Jed but he claims innocence and points the finger at Amy, who he saw go in earlier. No one believes she didn't do it, even when she shows them the paint on Slappy's shoes.

Amy is double-grounded but still allowed to perform at the Party House. Amy's mom drops her off and she starts preparing for the show. Kid n Play arrive and Margot informs them that they've transposed the address. Backstage, a little girl named Alicia comes up to Amy and asks to be introduced to her doll. Amy smiles at Alicia's mom and exchanges some banter with the little girl. Slappy grabs the little girl's hand and won't let go. The little girl starts crying and screaming but the dummy won't loosen its grip. A group of children gather around and start crying as Alicia's mother pleads with Amy to knock it off. Finally Slappy lets go of the kid. Amy gets fired and takes the bus back home.

Amy tells her mother about the show and as soon as she talks her down, Sara bursts into the kitchen to accuse Amy of vandalizing her room again. Inside Sara's room, someone has taken red paint and written "AMY AMY AMY" all over the walls.

Now would be a good time to examine why this might be the onlyGoosebumps sequel to eclipse the original. Slappy's antics in this book are not designed to just be weird and "scary" as in the first book. Slappy's increasingly disturbing actions only serve to convince Amy's family that she is literally insane. Amy's mother begins suggesting she see a doctor for "help."

Amy decides to stay up late so she can catch Slappy in the act. As soon as the dummy comes to life, she follows it into Sara's room. She watches as Slappy grabs a paintbrush and then tackles him before he can ruin another painting. Sara wakes up and calls her parents into her room to stop Amy. The next morning, Amy is told she has an appointment with a "shrink." Before she can make that appointment however, Slappy decides to break his silence. He informs her that she's his slave and that until she accepts that, he'll keep vandalizing the house until they lock Amy away. Again with this slave business. Given that his targets have thus far been exclusively female, I can only imagine the situation plays out like this in his head:

Amy decides that violence is the solution and begins wrestling with Slappy. Slappy shares her enthusiasm for violence and punches her in the head, knocking her out. Great, more violence against women, at least theimportant parts of the first book have been carried over. She comes to and locks Slappy in the closet. He begins ramming the door, trying to break it down. Sara comes into Amy's room and admits that she knows Slappy is alive but wanted her parents to think Amy was crazy because she was jealous of her. This leads to a strange but sweet scene of reconciliation between the sisters as they realize that each was jealous of the other. Admittedly this scene seems to have come from another book, but it contains no werewolves so it's alright.

Slappy bursts out of the closet and the girls tie his arms and legs together and throw him away. But the cat came back the very next day, as Slappy shows up on the kitchen table in a scene that is verbatim lifted from the first book, right down to the Frosted Flakes.

That night, Amy hears Slappy once more sneaking into Sara's room. She follows him in but then another shadowy figure lunges out of the dark at Slappy. The girls flip on the lights and see Dennis, Amy's old dummy, pummeling Slappy. Dennis throws Slappy against the iron bedpost. Slappy's head cracks in half and a large white worm crawls out. What. The worm quickly slides through a crack in the wall.

Amy parents burst out of Sara's closet and clumsily admit to believing Amy's story. Sara and Amy had set the entire thing up, with Jed reprising his role as Dennis.

Questionable Parenting:
Rather than investigating on their own, Amy's parents are prompted by Sara to just hide in a closet while their kids wrestle with evil dolls. Nick and Nora they ain't.

Multicultrual Alert:
Amy listens to reggae music. Dad's is an expert at making Chinese food in his wok. Slappy loves the films of Miklos Jancso.

Conclusions:
A fairly clever take on a type of family not often seen in these books, Night of the Living Dummy II was pretty good, which is surprising given that I literally did not remember a single thing about it from when I read it as a kid until I got to the weird worm ending. Gotta love that non-threatening cover too.

Part1 Maybe what they say is true that; what happens today will be the opposite of yesterday, that i…