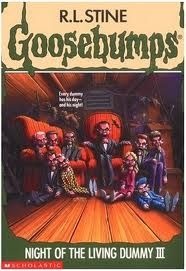 Official Book Description:
Trina O'Dell's dad used to have a ventriloquist act. That's why he has all those dummies in the attic. He calls it his Dummy Museum. There's a dummy with freckles. And one with a sneer just like Rocky. Trina and her brother, Dan, think the dummies are pretty cool.
But now there are voices in the attic. And dummies keep showing up in the strangest places.
No way those dummies could be alive! Right?

Brief Synopsis:
There were two dummies each in the first two books, but maybe that wasn't enough dummies for you. Maybe you said, "Well, two dummies, that's good enough for some people, but I'm not Some People! No, I'm a guy or girl who demands thirteen dummies in my childrens' literature!" Good news!

Trina's dad used to be a "famous" (which I'm sure is relative-- so to speak) ventriloquist, but now he's retired and works in a camera shop. However, he still collects and refurbishes old ventriloquist dolls in his spare time. He even calls his attic the Dummy Museum. As the book opens, Trina and her younger brother Dan enter the attic and, showing they too regard the room as a museum, neglect to pay the suggested donation. Trina and Dan begin looking at all the creepy dolls, all of which have names, such as Wilbur and Rocky. Rocky is described as dressing like "a tough guy," due to his red and white striped shirt and jeans.

Dan picks up Miss Lucy, the only female dummy in the collection, and begins to threaten Trina via the doll. Since he's only ten years old, it does not take much effort to make his voice feminine, but his gender-bending antics are interrupted by Rocky, who leans forward in his chair from across the attic and also begins threatening Trina. You at home can also threaten Trina, in case you're feeling left out. Just rock your elbow on your knee and pretend your hand is a naked sock puppet.

If you were curious, Rocky did not really come to life, he was operated by Trina's dad, who had snuck up to the attic and could not resist the urge to threaten his daughter via a doll. Once the hilarity of scaring a child had passed, Dad shows his kids his new doll: our old friend, Slappy. He says he found it in the trash (I wonder if the twist to this book is that their father is a raccoon?) and the only thing wrong with it was that his head was split in half. Because of the doll's big grin and also his affinity for A Thousand Acres, Dad calls the new doll Smiley.

The phone rings and while their dad goes downstairs to answer, Trina finds a yellow sheet of paper in the dummy's pocket. She reads the magic words out loud and the doll reaches up and slaps her. This gives Trina the inspiration for an even better name for the doll: Asshole.

Dad comes back and tells the kids that their uncle Cal and cousin Zane are coming to spend the week with them. Trina and Dan hate Zane because he's a total loser. Glass houses, etc. Dad makes everyone promise to not scare Zane, and while the kids agreed, Slappy didn't, so we can't really hold the evil doll accountable for his actions later in the book.

Zane shows up and he's grown. He looks like he works out and begins taking pictures of everything. He tells Trina's dad that he enjoys taking still-lifes and candids. Poor Zane, since Flickr hadn't been created, he has nowhere to let this obnoxious habit flourish. You might be wondering if with this new photography hobby, whether Zane is still a scaredy-cat. Well, shortly after he takes a picture of the banister, he goes upstairs to unpack and screams like a little girl when a doll falls on him. That's how you know.

So, if you liked the part in the last couple books where the dummy did stuff and then the kids got blamed, there's a good eighty more pages of that here. Rocky the dummy shows up in the pictures Zane snaps, Rocky shows up in the middle of a trashed room, etc. Trina and Dan think Zane must be trying to get them back for all their tomfoolery, and so the siblings devise a plan wherein they wait upstairs in the attic to catch Zane retrieving a dummy. They spend quite a long time up there, but eventually they do meet more success than some other pairs of siblings, as they spy Zane retrieving Rocky. They confront him and tell him that just because they made his clothes dance is no reason to play with dolls. Zane promises to quit the funny business, yet the book mercilessly does not end. Rocky keeps showing up and doing things. The dummy ruins a dinner party and smashes Zane's camera, and Trina's parents think she and her brother are responsible. Trina's dad threatens his kids with the promise that they won't be allowed to go to camp, which based on other Goosebumpsbooks, is probably less of a threat than he intended.

Trina and Dan reason that Zane is still responsible for these mild acts of terror, but it's not until Rocky climbs into her bed one night and begins choking her to death that Trina begins to suspect Zane, who isn't a ventriloquist dummy who just tried to choke her to death. Anyways.
Trina and Dan decide to wait up in the attic again, this time armed with a camera to snap Zane in action. Unlike in the sequels to these books, the sequel to this event yields a new discovery: the party responsible for carrying out Rocky this time is Slappy the dummy. Trina calls him Smiley and he corrects her, then punches her in the head. Humanitas Award for RL Stine.

Trina and her brother wrestle the doll to the ground. They carry Slappy outside and dump him in an abandoned well (?!) in their backyard. Job well done. All's well that ends in a well. Well-come Back Mr. Kotter. Well... let's move on.

That night, Trina dreams about Slappy dancing around with Miss Lucy and the other dolls upstairs. Hey, I like dreaming about dancing as much as the next person, but I think a scarier dream would have involved anything else at all.

For what happens next, I'm going to refer to RL Stine's Diary entry for October 10, 1995, a copy of which was accessed from the archive of his Xanga before he made it friends only:

Today was totally boo-ring dudes.
10:02 AM: Woke up, thought I heard a horrible monster in my bed.
10:03 AM: Turns out it was only my sheets.
10:08 AM: Sat down to write new 'Dummy' sequel.
10:12 AM: Opened file NOTL2.wpd.
10:30 AM: Nutter Butter break.
10:48 AM: Finished 'Night of the Living Dummy III,' became terrified at reflection of horrible monster in the computer screen.
10:49 AM: Discovered reflection was of self, vowed to spend some portion of millions on plastic surgery.
(The rest of the entry is just pictures of his feet and song lyrics.)

Yes, if the following sounds familiar, that's because this is now the third time this exact scene has occurred in these books. Not a variation thereof, but the exact scene, quite possibly merely C+Ped. Trina comes downstairs the following morning only to discover a filthy Slappy waiting for her on the breakfast table. A sequel should probably provide the reader with an experience they couldn't get from just rereading the original.

That night during a thunderstorm, Trina and Dan confront Slappy. He gives them the tired spiel about how they're his slaves, yet again fails to give any specific details on what that entails. Also, I guess Ken Russell isn't the only one trying to forget the white worm, as there is no reference to it. There is still the sheet of paper with the magic words on them, and Trina figures that if she can say the words again, he'll stop being a living dummy roman numeral three. Dan holds Slappy down and Trina retrieves the paper. She reads the words but they have no effect on Slappy other than amusement, as he laughs and mocks her for thinking it would work. However, the twelve other dummies in the attic suddenly begin encircling Trina, Dan, and Slappy. Trina thinks they're screwed until the dolls race past the humans and begin savagely beating Slappy. Wow, no one likes this guy. Maybe the reason he wants slaves is he's lonely and needs a friend. Aww, it almost makes you feel sorry for the camera-smashing, art-ruining, vomit-spewing, kitchen table-sitting, child-beating, child-choking, worm-filled son-of-a-bitch.

Zane shows up in the attic for no reason and sees Trina and Dan standing in the middle of a pile of now-lifeless dolls. Zane tells them that he knew they were the ones causing all the trouble and goes to tattle. Trina and Dan get grounded for life, and make your own reference to the sitcom.

But the Twist is:
While saying goodbye to Uncle Cal and Zane, Trina's dad tells Zane he'd like to buy him a new camera to replace the smashed one. Zane tries to suck up and tells her dad that he's not interested in photography anymore, and what he'd really like is a ventriloquist dummy. Trina's dad tells his daughter to run up to the attic and fetch Zane a dummy. Trina, still upset with Zane singling her and her brother out for the crimes they didn't commit, brings down Slappy. She sees the dummy wink as Zane happily escorts the doll into the car.

the Violent Doll-Girl Relationship:
Trina O'Dell and her dad's ventriloquist dummy "Smiley," who makes kissing sounds to her at one point.

Questionable Parenting:
Trina's dad tells his kids that he's "disgusted" by them. Man, when an adult who literally plays with dolls is disgusted by you, you have really strayed.

Oh Burn? Alert:
"Trina, you're about as funny as a wet sponge," he said.

Conclusions:
A sequel which originally came only nine months after the previous installment, Night of the Living Dummy III isn't terrible, but that it's more or less the same book as the other two really tried my patience at times.