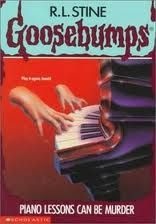 Front Tagline: Play it again, hands!
(Is the target audience even going to get this pun?)
Back Tagline: Practice Till You Drop...Dead.

Official Book Description:
When Jerry finds a dusty old piano in the attic of his new house, his parents offer to pay for lessons. At first, taking piano seems like a cool idea.
But there's something creepy about Jerry's piano teacher, Dr. Shreek. Something creepy. Something Jerry can't quite put his finger on.
Then Jerry hears the stories. Terrifying stories. About the students at Dr. Shreek's music school. Students who went in for a lesson... and never came out.

Brief Synopsis:
Jerry and his parents have just moved into a new house. Well of course they have, all houses in a Goosebumps book are either abandoned or newly acquired. Jerry starts out the book by forming clumps of dust into mouse-shapes and then crying like a little girl that there's mice in the new house, which spooks his parents to "hilarious" effect. As you can imagine, it took me a long time to realize that there wasn't a the Other Sister-type story occurring in this book. While exploring the new house, Jerry finds an old piano in the attic. Later that night, Jerry hears piano music playing from the ceiling, but when he goes to investigate, there's no one playing. The next night, he hears music again, goes to investigate, discovers nothing. Repeat this scenario for fifty pages and welcome to the first half of the book.

Eventually, Jerry sees a ghostly woman playing the piano, which has been moved down into the family room. She looks up at him and then her face melts off, revealing a bare skull. He screams hysterically for his parents. Picking up on Jerry's interest in the piano, but ignoring the part where he says he's terrified of face-melting piano-ghosts, Jerry's parents enroll him in private lessons taught by Dr. Shreek. The piano tutor's name is Dr. Shreek. Well of course it is.

Dr. Shreek is a friendly, Santa Claus-looking old man, which can only mean one thing: he's some sort of sicko. And sure enough, Dr. Shreek just can't get enough of Jerry's hands. He dwells on his hands, constantly telling him how wonderful they are. At one point the book turns intoReefer Madness as Dr. Shreek tells Jerry to play "Faster! Faster! Faster!"

Eventually, Jerry gets so good at being hand-fetishized by Dr. Shreek that he is invited to take private lessons at Dr. Shreek's private school at the edge of town. When Jerry tells Kim, the Asian (OMG) girl whose locker is next to his, about his lessons, she freaks out and runs away. It is entirely possible that RL Stine gleaned all he knows about Asian culture from seeing the box cover to Akira Kurosawa's Ran.

Jerry is dropped off at the large, scary looking music school for his lesson and immediately goes inside and sees a monster in the hall. OH I BET IT IS REALLY A MONSTER FOR NO REASON AT ALL. Except, it is a robotic floorsweeper that looks like a monster. Dr. Shreek tells Jerry that the maintenance man, Mr. Toggle (oh come on), is a wiz at robotics. Dr. Shreek then leads Jerry down the long, winding corridors to the private rehearsal room. Jerry hears piano music coming from every room in the building, and as he walks down the halls, he can see the instructors hunched over the pianos, guiding unseen students. After his lesson, Jerry gets lost in the building again and Mr. Toggle comes to his rescue and leads him back to the entrance. He also promises to show Jerry his "private workroom" the next time he visits. It is really amazing how few plot points would have to be tweaked for this to be an episode of SVU.

Jerry returns home and continues to hear the ghost playing her music. Eventually, he goes down to confront her again, and she raises up her arms and reveals bloody stumps where her hands used to be. Jerry screams so hard that he passes out and when he wakes up, his parents tell him they're taking him to a psychiatrist. The psychiatrist tells Jerry that he's imagining the ghost, but that he's not "crazy." I don't know though, it doesn't really get a whole lot crazier than that, does it?

Jerry is outside shoveling snow when he runs into Kim again. He tries to tell her about the ghost he saw, but she also thinks he's crazy. He asks why she freaked out and she tells him she doesn't have a Green Card. Just joking, she says that she heard a lot of spooky stories about the school and that's why she ran away, because she heard some stories. Then she drinks some hot chocolate and leaves, never to reappear again. Fittingly, the minority character is literally the minority character within the book itself.

Jerry decides that he doesn't want to take lessons again and his parents tell him that since they've already paid for his last lesson, he can go in and tell Dr. Shreek in person that he's quitting. Jerry is dropped off at the school and wastes no time in telling Dr. Shreek that he's quitting his lessons. Dr. Shreek goes berserk and insists that he needs Jerry's hands, grabbing his wrists to force him to stay.

Jerry escapes his grasp and scrambles through the school building until he reaches the auditorium, where there is a crushing cacophony of piano-playing occurring. Jerry runs inside and sees row after row of black pianos, each with a head-nodding instructor, and each piano being played by human hands, but only human hands. Dr. Shreek dives through the air and tackles Jerry, grabbing onto his ankles.

Mr. Toggle bursts into the room and saves Jerry by turning off Dr. Shreek with a remote. It turns out Dr. Shreek was a robot. Jerry asks Mr. Toggle to turn off the pianos and he does that as well. Jerry thanks him for saving his life, but as he turns to leave, Mr. Toggle stops him. Mr. Toggle is the one who needs Jerry's hands, he explains. Mr. Toggle is apparently a brilliant robotician, but he can't make human hands correctly. So he uses human specimens and using computer technology, makes the severed hands play beautiful music all the time.

Jerry tries to escape the auditorium but he runs right into the ghost girl from his house. She screams at Jerry, telling him that she tried to warn him, to scare him away from taking lessons from the school. If a ghost can go through that much effort, why can't she also tell him specifically "Don't take lessons from Dr. Shreek's school." The ghost holds up her bloody stumps and then using ghost-powers, conjures up all of the ghostly spirits from the disembodied hands playing at the pianos in the auditorium. A swarm of ghosts attached to their human hands attack Mr. Toggle in front of Jerry, carrying the robotician off into the woods behind the school, never to be seen again.

But the Twist is:
Jerry's family sells their piano and buys a Big Screen TV... ON THE MOON. Okay, so there's no twist.

the Platonic Boy-Girl Relationship:
Jerry and his pal Kim Li Chin, whose ethnicity never appears in the book.

Minority Alert:
Though never described as such, one can only assume that Kim Li Chin is of Asian descent.

Questionable Parenting:
Jerry appears to live in an emotionally abusive household, as evidenced by this quote from his mother:
"Very funny Jerome... Your father and I sure appreciate your scaring us to death when we're both very nervous and overworked and trying to get moved into this house... Why can't you act your age?"

Foreshadowing Alert:
Mr. Toggle "jokes" that he programmed Dr. Shreek. But he wasn't joking, Dr. Shreek is a robot! I WANT MY LAUGH BACK.

Great Prose Alert:
Well, first of all, another character "goggles" in this book. Secondly, the phrase "her mouth was so wide I thought she was going to drop her teeth" is used not once but twice in the course of a 120 page book, by two different characters.

Conclusions:
I've got to hand it to RL Stine, thanks to the fairly grotesque imagery (for a Goosebumps book) and some solid storytelling, Piano Lessons Can Be Murder is one of the better books in the series.

Image Credits: Sharon Lopez via Bitlanders When I checked on my Rewards section here in Bitlanders, …

"You only live once" It is a very popular quote that I'm sure everyone heard of already. Usually yo…

THE REAL STORY OF QURAN.....a unique lesson for us

CAIN (QABIL) AND ABEL (HABIL) The Holy Quran says: And relate to them the story of the two sons of A…