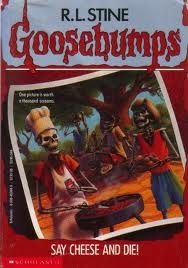 Front Tagline: One picture is worth a thousand screams.
Back Tagline: Every Picture Tells A Story.

Official Book Description:
Greg thinks there is something wrong with the old camera he and his friends found. The photographs keep turning out wrong. Very wrong. Like the snapshot Greg took of his father's new car that shows it totaled. And then Greg's father is in a nasty wreck.
But Greg's friends don't believe him. Shari even makes Greg bring the camera to her birthday party and take her picture.
Only Shari's not in the photograph when it develops.
Is Shari about to be taken out of the picture permanently?
Who is going to take the next fall for...
the evil camera?

Brief Synopsis:
Greg and his friends Shari (Female), Michael (Fat), and Bird (Show-Off) are aimlessly walking around town bored. Good thrilling start to this book already. They decide to break into the Coffman House, an abandoned house at the end of their block. I know the Real Estate market is tricky, but how is it that every character in a Goosebumps book lives in a neighborhood with an abandoned house? The group of friends has heard that a homeless man named Spidey lives in the abandoned house, but they decide to explore the house anyways, since the opportunity to break into a homeless man's home proves far too wonderfully ironic to pass up.

While exploring the basement, Greg finds a secret camera hidden in a secret compartment that was secretly kept secret. He takes the camera and in one of the more homoerotic scenes in the book, has Michael "pose" for a picture. Shortly after the picture is snapped, Michael falls off the basement's staircase and hurts his ankle. Footsteps from upstairs alert the group of children and they escape, with Greg taking the camera with him. Once outside, Michael asks to see the picture Greg took, only to discover the camera captured what occurred immediately after the picture was snapped: Michael falling. The kids attribute this and subsequent futuristic camera captures to the camera being broken. Because that's what broken cameras often do, they often capture the future.

Greg and his friends split up and return to their respective households. Greg sees a brand new station wagon (lol at SUVs not existing yet) parked in the driveway. He's thrilled and takes a snapshot because a station wagon is just that freaking cool, jack. Running upstairs to hide the camera, he is shocked to discover the photo he snapped of the car shows the station wagon totaled. This leads to a preview of the last ten minutes ofFat Girl (minus ax-murdering) as Greg awkwardly is forced to ride in the car that he suspects will crash at any moment. This is then tempered with about five pages of station wagon-based observational humor ("Cup-Holders sure are funnie," etc). When the family arrives safely at home (after almost being hit by a truck), Greg chalks the whole photo thing up to the camera being broken again.

Shari and Greg attend Bird's baseball game and snap his photo. The picture develops and shows Bird on the ground, writhing in agony. Bird then tricks them by pretending to be injured, and then gets actually injured, mimicking the photo. At the same time, Greg's brother arrives at the baseball game to tell Greg that their father was just in a highly convenient car accident.

A few days later, Shari calls up Greg and insists that he bring his camera to her birthday party to take photos, because "it will be fun." Shari might be the dumbest Goosebumps character ever. At her party, Greg obliges her request and takes a picture of her... but the picture develops and reveals only the tree and scenery behind her. Shari is not captured on the photo, nor on the next picture she makes him take of herself. Then everyone at the birthday party holds a hide and seek game. Then Shari disappears for real. Police come and search the premises but there's simply no evidence or clues, Shari's vanished without a trace. Greg tries to tell a police officer what happened, but the cop for whatever reason thinks that Greg's claim of using a magical camera that tells the future is somewhat dubious.

Greg goes home from Shari's to find his house abandoned and his room ransacked. Spidey must have been searching for the camera, Greg deduces without the use of Occam's Razor. Greg calls up Bird and Michael and has them meet him at the baseball diamond so the three can deliver the camera back to the Coffman House. The three meet and are then harassed by a couple bullies, who try to steal their camera and accidentally take a picture of Greg in the struggle. The boys escape from the bullies with their camera, but it's getting late, so they postpone returning the camera. Greg looks at the picture the bullies had just taken and sees himself and Shari at the baseball diamond, cowering in terror as a shadow looms over them.

Greg, frustrated with a lot of things (but mainly his horrible evil future-telling camera), rips up the blank photos of trees he had taken at Shari's birthday party. Two hours later, he gets a call from Shari. She had just suddenly reappeared in front of her house two hours prior. She has no recollection of where she was for the past few days, and the two agree to meet the next day at the baseball diamond.

When they meet the next day, Spidey appears (his shadow casts the scene from the snapshot) and chases after Shari and Greg and the book turns into a Scooby-Doo episode. The two agree to meet the next afternoon at the Coffman House to return the camera for good.

Naturally, a storm is brewing outside as the two enter the Coffman House the next day. They make it down to the basement and Greg returns the camera to its secret hiding spot. As they walk up the stairs, Spidey appears and forces them back down into the basement.

What follows in the novel is a pretty great example of how not to write. Spidey announces himself to be "a scientist!" Dr. Fritz Fredericks to be exact. He tells the kids that his lab partner invented the camera and that since he, Fritz, was evil, he stole the camera and the plans from his partner. But, in one of the best lines in Goosebumps history, Fritz reveals that his lab partner "was much more evil than I was." Fritz's partner didn't just dabble in the dark arts, he was a master of them. That too is Fritz's line. Fritz's lab partner cast a curse on the camera, causing it to capture souls. What.

Fritz tells the two that the camera had killed a lot of people, and since they now know his secret, they aren't allowed leave the basement alive. But didn't they already sort of knew the biggest part of his secret that mattered before they entered the basement? A struggle ensues and Shari grabs the camera from Fritz and snaps his picture. When the two kids make it to the top of the stairs, they notice that Fritz is no longer struggling with them. The two look at the photo and see Fritz's dead body. Walking back down to the basement, they see the camera's capture was accurate. This is, as best as I can figure, the only time in Goosebumps history when the main child characters actually killed a non-monstrous human being. The two leave the house to call the police. Aww, their adherence to civic duty is cute.

But the Twist is:
Lame. The two bullies for some reason were watching all this go down and sneak into the Coffman House (which I thought was crawling with police but whatever) and steal the camera and take a picture. Who cares.

Questionable Parenting:
Greg's dad almost kills his entire family by not paying attention to the road, then harps on them for complaining. But he's earned that attitude. After all, he's driving A NEW STATION WAGON, MOTHERFUCKER!

Crimes Against Fashion Alert:
Proving that RL Stine should never be allowed to dress a child, Shari appears at various intervals in the book sporting a yellow jumper, various shades of leggings, and crimped hair. Did Stine learn everything he knew about how kids dressed from Square Pegs?

Vague Word Choice So As Not To Infringe On Name Brands Alert:
Greg's brother works at Dairy Freeze, the group of friends follows the adventures of a gang of superhero mutants known as the X-Force, and since Polaroid is a name-brand, the camera is described in excessive detail as a self-developing camera.

Memorable Cliffhanger Chapter Ending:
There are some all-time stupid ones in this book, but I'd be bereft in my duty if I didn't report on:
Ch. 9/10:
Greg's brother wants to know... ARE THERE ANY MORE POTATOES?

Great Prose Alert:
"His hand trembling, his mouth hanging open in disbelief, Greg goggled at the photo."
That's not a typo, he goggled.

Conclusions:
I took a picture of myself before reading Say Cheese and Die! with a magical evil future-telling camera and looked at the snapshot after I finished, and sure enough, I looked pretty bored. But at least I looked pretty.

Everything About Pizza, the most liked Fast Food of era

Hey! I m back with my another informative blog. I want to write about it from long but couldnt find …

For the Love of CHEESE