Goosebumps: Stay out of the Basement (Book Review) 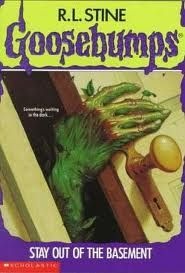 Official Book Description:
Dr. Brewer is doing a little plant-testing in his basement. Nothing to worry about. Harmless, really.
But Margaret and Casey Brewer are worried about their father. Especially when they...meet...some of the plants he is growing down there.
Then they notice that their father is developing plantlike tendencies. In fact, he is becoming distinctly weedy--and seedy.
Is it just part of their father's "harmless" experiment? Or has the basement turned into another little shop of horrors.

Brief Synopsis:
Siblings Margaret and Casey Brewer are playing frisbee outside on a warm California winter day. Casey attempts to throw the frisbee at their father but he gruffly declines, as he has much work to do in the basement. See, Casey and Margaret's dad is a CEO for a very important office supply firm and -- just kidding, he is of course another scientist. Ever since he got fired from PolyTech, their botanist father has been hanging around the basement, experimenting with plants. When Margaret tries to go down to the basement to see her father, he holds a bloody hand up to the light and utters the titular line, Be Careful What You Wish For...

Casey and Margaret's mom, Mrs. Brewer has to leave to Tucson to visit her sick sister, and Mrs. Brewer reminds Casey, Margaret, and even Margaret's friend Diane to be nice to Dr. Brewer and make sure he eats meals. Once Dr. Brewer emerges from the basement, his hand still bandaged, and takes Mrs. Brewer to the hospital, Diane gets a great idea: they should Stay In of the Basement, and go investigate Dr. Brewer's secret experiments. Casey would rather watch his action movie that he rented, the title of which is left unsaid but the reader gets the clues that it is hyper-violent and stars Arnold Schwarzenegger, so it is obviouslyJunior. Eventually the three children make their way down into the basement, which is stacked with large tall plants of many variations, some bearing fruits, all very large for plants that supposedly had only been growing for a few weeks. Out of respect for the many elementary school children who use this blog to cheat on their book reports, I will refrain from making a marijuana joke.

Casey notices a large glass contraption similar to a phone booth hooked up to a generator in the corner. He walks over to touch it and his body jolts with electric shocks. Only he was just funnin, he's not hurt at all. RL Stine beat Jurassic Park to making this scene by over a year, so I guess now we know the answer to the question of whether Spielberg influenced Stine or vice versa. After admonishing him for his "hilarious" prank, the girls stop and listen to the plants, which sound like they are breathing. No, sorry ladies, that sound is millions of readers gasping for breath at Casey's deliciously humorous prank. The tendrils of some of the plants begin to sway, as if beckoning the children towards the plants, and indeed some of the plants were heaving as if in breath. The children wisely decide to Stay Out of the Basement afterall, and scatter out just as Dr. Brewer pulls up in the driveway. I guess they live three minutes away from the airport.

Suddenly Casey remembers that he left his sweater down in the basement! He quickly runs down to retrieve it while Dr. Brewer is stopped by their neighbor in the driveway. Casey spots his sweater next to one of the tendriled plants, and when he goes to retrieve it, the plant's arms grab him and hold him tight. Margaret comes down to rescue Casey and she looses him and as they make their way up the stairs, they run into Dr. Brewer. Dr. Brewer calmly sits them down at the kitchen table and tells them that one day he'll explain everything in the basement and they'll all go down together, but until that day, they are not allowed in the basement. The next morning, Dr. Brewer has installed a lock on the door.

That afternoon, Mrs. Brewer calls Margaret to tell her that her sister's surgery didn't go as planned and she'll be staying in Tucson a few more days. Margaret tells her mom about the basement and how Dr. Brewer has started wearing a Dodgers cap at all times (the sports team, not like an Artful Dodger-type hat, sadly). Mrs. Brewer tells her daughter that her father probably feels like he has something to prove to Mr. Martinez, his old boss who fired him.

After getting off the phone with her mother, Margaret heads downstairs and spies her father in the kitchen, eating something from a plastic bag. She stays hidden until he leaves, and when she retrieves the bag, she discovers it's plant food! She tells Casey about this as she makes him a peanut butter and jelly sandwich, but he doesn't seem to think it is all that weird that their father would be eating fertilizer. He then mocks her for several pages by pretending to be the Incredible Plant Man and she's Weed Woman. I don't know, anyways,

A few days later, the two siblings and Diane are playing frisbee, again. Was this book underwritten by the California Frisbee Council? Casey tosses a frisbee at their father, who has emerged briefly into the sunlight, but it hits him in the head, knocking his Dodgers cap off and revealing green leaves growing on his scalp! Stay Out of the Organic Hairclub For Men. Dr. Brewer finally sits down with his kids and explains that the leaves are just a side effect-- a side effect to what, he won't say, but he does explain his experiments. He asks if the kids are familiar with DNA, and since all eleven-year old kids are familiar with DNA, he continues. He's trying to take animal cells and put them into plant cells to create hybrid plants that have never existed. The glass booths in the basement are his transports, and though he's real close to succeeding, he hasn't quite made it work yet. He then brushes off all the moral and ethical concerns of his children as he heads back to the basement for more God-playing.

That night, Margaret again spies on her father in the bathroom... uh... anyways, she watches him take off his bandage and the blood from his wound is bright green! She also takes a peak in his bedroom and notices that his bed is filled with moist dirt and crawling with worms. So what, a lot of guys revert to their bachelor ways when the wife's out of town.

The next afternoon, Margaret tells Casey all about her spying discoveries from the night before. Suddenly, Dr. Brewer appears and tells his children that he's made them lunch. The two are served what appears to be green mashed potatoes, and their father yells at them to eat it. So the husband is a slob and can't cook, still nothing out of the ordinary here. Luckily for the kids, the doorbell rings and Dr. Brewer leaves to talk to Mr. Martinez, who has stopped by to check on Dr. Brewer's progress. The two kids scoop their green food into the trash and tell their father that they ate it. Oh kids.

The next day, Dr. Brewer tells his kids he'll be out for a few hours to help their neighbor install a sink. Maybe I didn't grow up in the right neighborhoods, but is that really something you casually ask a neighbor to do for you? The kids see this as their chance to once again not Stay Out of the Basement and as soon as he leaves, Casey picks the lock and the two venture downstairs. They come across Mr. Martinez's suit, neatly folded and hidden near a table, and the two realize that neither saw Mr. Martinez leave the house after visiting yesterday. The two hear footsteps above and realize their dad's come back. The two emerge from the basement just in time to be caught by Dr. Brewer. He explains that Mr. Martinez simply got hot in the tropical climate of the basement and took off his suit and left with out it. The kids buy this because they are retarded. Dr. Brewer heads out to continue work on the sink, but before he goes, he threatens the kids to... well, you know by now.

The next day, Dr. Brewer tells his kids the great news, that their mother is coming back within the hour and he's going to go to the airport to pick them up. This so excites Casey that he insists that he and his sister go fly some kites while they wait. That's really what happens. But of course the kites are in the basement, so they break in again and that's when they stumble upon Mr. Martinez's shoes and pants. Finally they realize that maybe just maybe Mr. Martinez didn't leave their house naked. The two kids hear thumping from a supply closet that has been nailed shut and the two pry it open, only to discover hideous plants with human features. One has an arm. The other has fingers. A third has pride.

But the Twist is:
Margaret walks by the new flower garden and a flower pleads with her that he's her real father.

Questionable Parenting:
Margaret's dad calls her "Princess" and "Fatso" (because she's skinny-- he's an ironist you see). Oh and that whole trying to kill his whole family thing too I guess.

R.L. Stine Shows He is Down With the Kids:
"We need a lemon tree," Casey said as they slowed to a walk. "They're cool."

Useless Trivia Alert:
The cover to this book is one of two not drawn by series regular Tim Jacobus (the other being #12 Be Careful What You Wish For...). This is what me doing my homework on the series results in, trivia. And not even the good kind of trivia I can use at parties and other social gatherings, it's Goosebumps Trivia.

Memorable Cliffhanger Chapter Ending:
Ch. 13/14
Something is attacking Casey! It's... it's... it's a squirrel? Okay.

Great Prose Alert:
"So what are you trying to say, that Dad is out of his tree?"

Conclusions:
Stay Out of the Basement is the sort of Goosebumps book that grows on you,
hahahahahahahahahhahahahahaahaha get it?

Many years ago there was a restaurant which became the centre of the universe. It was jammed almost …